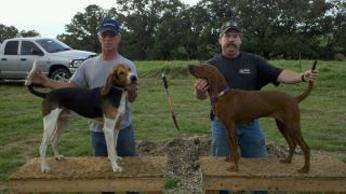 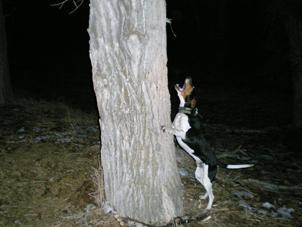 Up to 25 paid members, Chase’s club is the largest coon hunting association in eastern Montana, and is close to securing an American Kennel Club state championship event for next year, the winner of which would earn a cash prize. Chase is also working on hosting a world regional qualifier.

The MonDak Coonhunters Association hosts American Kennel Club and United Kennel Club sanctioned events. Firearms are prohibited as the raccoons are not actually killed. Instead, hunters score points when their dogs chase raccoons into trees.

Prior to starting the club, Chase had traveled to coon hunts in Oregon, Washington, Utah, North Dakota, South Dakota, Wisconsin, Iowa and Minnesota. Weary of all the traveling, he decided to start his own club in Fairview. “We have a lot of raccoons here,” Chase said. “Sundheim Park down here is an excellent location.”

Chase believes coon hunting is still a popular sport, and he hopes having a club in the MonDak region will make it easier for coonhunters in the area.

“It’s still popular,” he said. “But with the economy, a lot of people can’t afford to travel.”

In addition to hunting, the MonDak Coonhunters Association also hosts show events in which dogs are judged based on the judge’s mental image of the “perfect” dog.

According to the American Kennel Club website, judges “examine each dog with their hands to see if the teeth, muscles, bones and coat texture conform to the breed’s standard. They view each dog in profile for overall balance, and watch each dog gait (move) to see how all of those features fit together in action.”

Chase was first exposed to coonhounds when he was a child. His neighbor owned a hound, and he would often hear it barking in the alley. He begged his stepfather to let him have a hound of his own, but his stepfather never allowed it.

Chase qualified four of his dogs for the world in show at an event in Fort Ransom, N.D., this summer. “Last year I went over there and cleaned house,” he said. “And this year I went over there six weeks ago, and I won everything again. I won with four dogs on the bench for bench show, and I took second place in the night hunt.

All of Chase’s dogs are Purple Ribbon registered, meaning they are descended from at least 10 generations of champions. “There are people that have been raising the bloodlines I have for over 50 years,” he said. “It’s just bred down to a science.”

He has five Treeing Walker Coonhounds, which look like a large beagle, and a Redbone Coonhound. Chase recently has a litter of puppies, all but one of which he sold.

His work in the oil field keeps him from spending as much time with his dogs as he would like, but Chase still tries to take them hunting three nights a week.

“It’s a lot of fun,” he said. “Although around here there’s not much money in it.”

He plans on holding an educational seminar sometime this spring to teach anyone who is interested how to handle the hounds, while also explaining the rules and procedures of an event.

Anyone interested in the seminar or the MonDak Coonhunters Association can reach Chase at 406-224-2025.