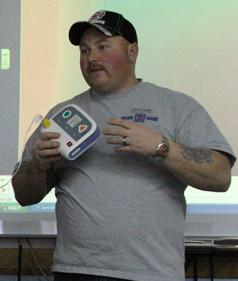 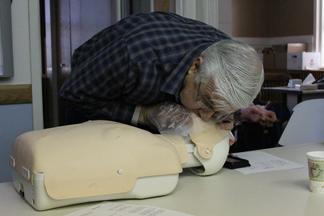 Inside a small conference room in the Donald G. Nutter Building in Sidney, Fairview native Ben Sorteberg trains a class of 14 Richland County employees in CPR.

“This is a very physical and emotional procedure,” Sorteberg said, showing participants how to perform CPR chest compressions. “You do them until you are mentally or physically unable to continue.”

Sorteberg is Fairview’s assistant fire chief and a certified American Heart Association instructor. He started Life Line CPR and First Aid to teach area residents how to perform CPR and basic First Aid in case of an emergency. He estimates he has already trained more than 200 people since he opened the business last year.

“I started the business because there isn’t enough CPR available,” Sorteberg said. “If someone needs to learn CPR tomorrow, they can get a hold of me.

“It’s a really important skill to know. Hopefully, you never have to use it, but if you do, you have a sense of confidence that you can help.”

Sorteberg said he has performed emergency CPR on at least 10 occasions. He first learned the procedure when he was 15 years old. “We lived on a farm and just wanted to have knowledge of it,” he said. Two years ago, he earned his American Heart Association certification.

In the conference room, Sorteberg shows a short video on a SMART board. The video demonstrates the proper technique for performing chest compressions on adults, which should be administered with two hands along the nipple line and should compress the chest two inches at a rate of 100 compressions per minute. “It follows the same beat as ‘Stayin’ Alive’ and ‘Another one bites the dust,’” Sorteberg said to give participants an idea of how rapidly they should apply compressions.

Every 30 compressions, two breaths should be given, stopping compressions for no more than 10 seconds, the video explains.

Sorteberg pauses the video to allow the participants to practice on mannequins. At the front of the room, Eddie Cook and Charles Flynn take turns administering chest compressions and breaths to their dummy. Cook works for Richland County IT, while Flynn works at the Eastern Ag Research Center.

“At the station we’ve had a defibrillator for three years, but no one knew how to use it,” Flynn said.

After Cook, Flynn and the rest of the class finishes practicing compressions, Sorteberg passes around an automated external defibrillator. He explains where the pads should be attached to a body and cautions that an accidental shock of someone with a normal heart rhythm could throw a person into cardiac arrest.

Next up is a demonstration of the Heimlich maneuver. Sorteberg wraps his arms around the belly button of a mannequin to show the procedure.

Finally, Sorteberg plays videos explaining the techniques that should be used when administering CPR to a child or an infant.

Sorteberg is willing to train individuals or groups, and his class can be held at a place of business or a person’s home. “I move around and make it as accessible as I can,” he said. He encourages anyone interested in learning CPR or first aid to call either his cell phone at 480-9702 or his house phone at 742-6661. He can also be reached via e-mail at b_sorteberg@live.com.