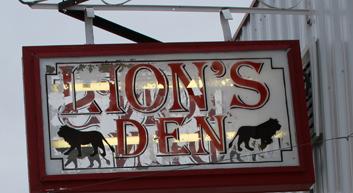 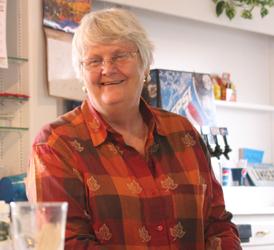 The community-owned Lions Den in Lambert has seen its role evolve since it was first purchased from the Carter family in 1988, but it has always had a central place in the community.

Originally intended to be a teen center, the Den now serves as a cafe, open for lunch on weekdays and breakfast on Sundays. It has also hosted many school-related functions, including the junior senior banquet, after prom activities and big brother, big sister activities.

“The Den does things to support any kind of student activities,” Lambert Public School principal Kara Triplett said. “They do a really nice job of supporting K-12.”

The Den also gives out an annual scholarship to a graduating senior who has had an active role in community service.

When the Den was purchased from the Carter family, a lot of work was needed to transform the building from a smoky bar to a family-friendly facility. Carpets were removed and new panelling was installed and painted, but it still took about 10 years for the smoke smell to go away, Lions Den manager Colleen Evenson said. “At first it was just a teen center, but after awhile they started opening it more so parents could come in and eat.

“It’s been community-owned non-profit since ‘88. It’s been quite a struggle to keep it going, but it’s kind of been holding its own ever since.”

The Den is open 10 a.m. to 1:30 p.m. Monday through Friday and 8 a.m. to 1:30 p.m. on Sunday. The cooking is done by Evenson and Vickie Shields, who also teaches at Lambert School, and they are the only Den employees who receive wages. All maintenance and cleaning is handled by volunteers.

“If it wasn’t for volunteers in the community, this place would never exist,” Evenson said. “You can’t even start mentioning names because everybody helps volunteer.”

Evenson said business is going well, and it doesn’t take long for the Den to fill up. The whole community enjoys eating at the Den, which is popular with all ages. Oil field business and construction at the school has put additional demand on the Den, but its hours remain limited. “I think if we could find more workers, we could be open more hours,” Evenson said. “Businesses with the oil that are bringing people in the mornings, they really would like somewhere to go for breakfast, but the only day it’s open for breakfast is Sunday.”

The Den holds co-op fundraisers with the senior center to pay for upgrades. The last several years they’ve baked and sold lefse together. They also host a Valentine’s Day supper of shrimp and prime rib at the senior center. “In a small community you really do have to work together, stick together, because if you’re both struggling, you don’t want the doors to close on both of them,” Evenson said.

The fundraisers, along with donations, have helped pay for new windows, cupboards and countertops over the years. The upgrades and the Lions Den scholarship are administered by the Lions Den’s board of directors, which includes a student and school faculty member in addition to several community members. “They have a meeting once a month to hash everything out and figure out what all we need to do, what improvements we need to make,” Evenson said.

The next planned improvement is replacement of the panelling along the bar.