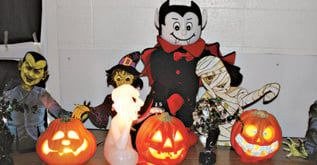 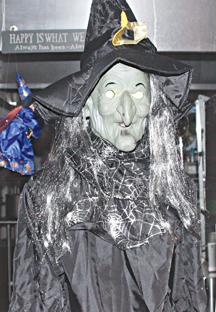 A witch sits behind the lunch counter at the Fairview cafeteria on Halloween.

A witch sits behind the lunch counter at the Fairview cafeteria on Halloween.

Walking into the Fairview school cafeteria last Monday, there was no doubt it was Halloween.

A strobe light and fog machine greeted students at the entrance, who walked into a dimly lit room covered with spooky decorations. The windows were covered with black construction paper, while the overhead fluorescents were turned off, transforming the usually bright lunch room into a dark, ghostly eatery. Completing the atmosphere were decorative witches, ghosts, jack-o-lanterns and vampires that adorned every wall.

A fake menu at the counter advertised delectable entrees like barbecued bat wings and mummy meatloaf, though those items were not actually available. The students had to settle for pizza instead.

“The kids really get into it,” said head cook Nicki Warren, the mastermind behind the haunted cafeteria.

All the decorations belong to Warren, who celebrated the occasion by wearing a pointy witch hat. She has been decorating Fairview cafeterias for the last 12 years. The last six at Fairview School and the previous six at East Fairview Elementary.

Halloween is her favorite holiday, and she adds new decorations to the lunch room each year. “I’ve always loved it since I was a little kid,” she said.

This year’s addition is a motion-sensitive witch, which springs to life when the students walk near it, prompting one cafeteria worker to joke about the mess she’ll have to clean up if startled students drop their trays when they walk by.

The witch was a gift from Warren’s sister, who also loves Halloween. “We kind of feed off each other for Halloween decorations,” Warren said.

One can only wonder what next year’s addition will be. Whatever it is, it will surely be a great addition to the scariest cafeteria in eastern Montana.