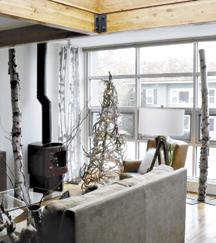 Along with the tree of antlers, Martini has added birch trees in his living room. 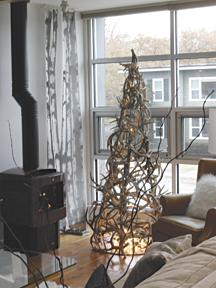 Change up the decor in your home such as this tree of antlers — an urban organic choice from Colton Martini.

Along with the tree of antlers, Martini has added birch trees in his living room.

Change up the decor in your home such as this tree of antlers — an urban organic choice from Colton Martini.

The Holiday at Home Tour in Missoula featured Martini’s loft home for its unique decorating scheme. The event spearheaded by 9 Mile Schoolhouse owner Kurt Cyr, where a committee was formed and homes were chosen to feature unique holiday décor. Proceeds benefit Youth Homes and Watson Children’s Shelter in Missoula.

The Martini home has an urban organic style. “My home was chosen because of the committee’s interest in my unconventional Christmas decor as well as their desire to feature my somewhat unique living space in such an unexpected location,” Martini said.

What does urban organic mean to Martini? “The urban part stems from being downtown, and organic stems from my reuse of things originally found in nature,” he said. Throughout the home floor-to-ceiling birch tree trunks, Christmas bulbs filled with feathers, natural and unexpected or unconventional items to decorate, as well as a tree made of antlers are displayed. “Yes, shed antlers, all from the Missouri and Yellowstone river bottoms,” he said.

Martini’s parents, Kim Stebbins-Martini and Tom Martini, helped create the tree. “My dad helped me create the frame for the tree and my mom helped with the construction,” Martini said. Martini also picked up quite a few things at Sidney’s business, the Trading Post. “Most specifically a white wool flokati rug used just for the tour… just some more ‘local’ homespun ideas,” he said.

Martini figures there were about 500 people who toured the home in early December, which helped raise close to $10,000, and he says, “I would be more than willing to do this again, and as it is an annual thing, I am hoping to get more involved in the planning of the future tours and hope to see it succeed on through the years.”