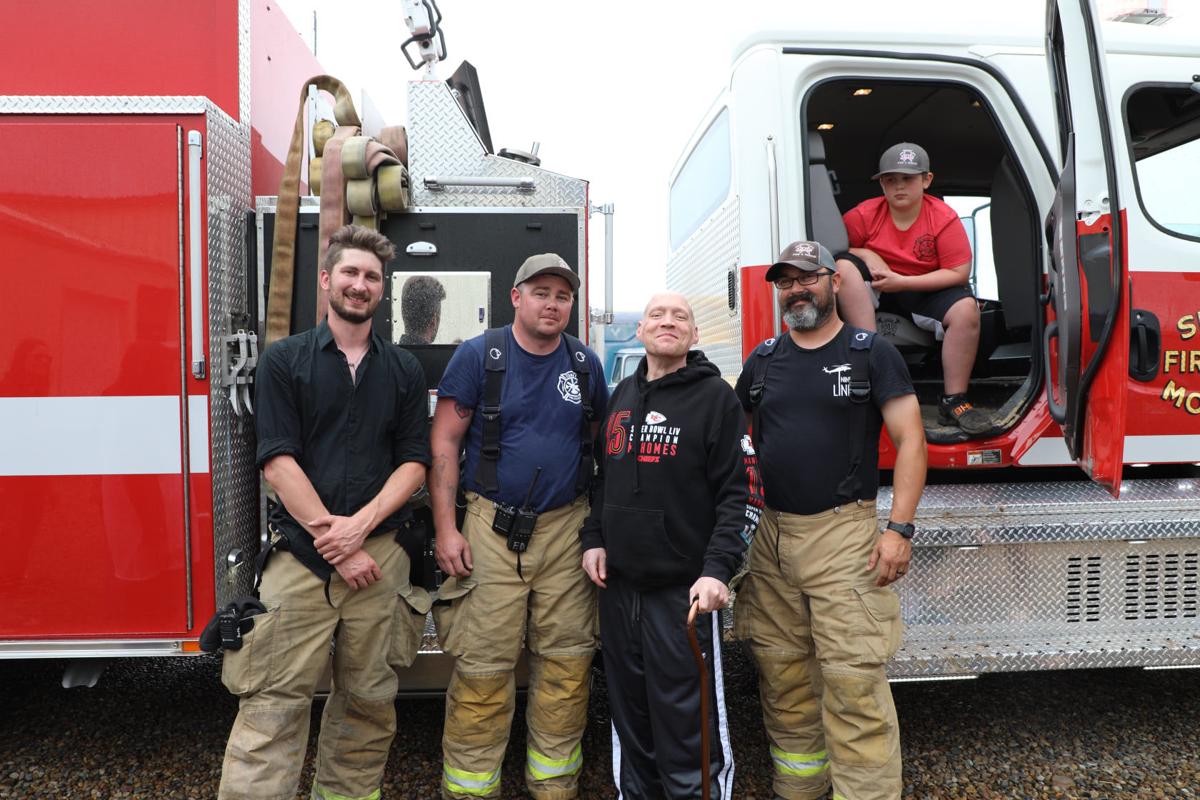 A county firefighting crew arrive at the Richland Opportunities Inc. (ROI) facility for a demonstration and to education clients. 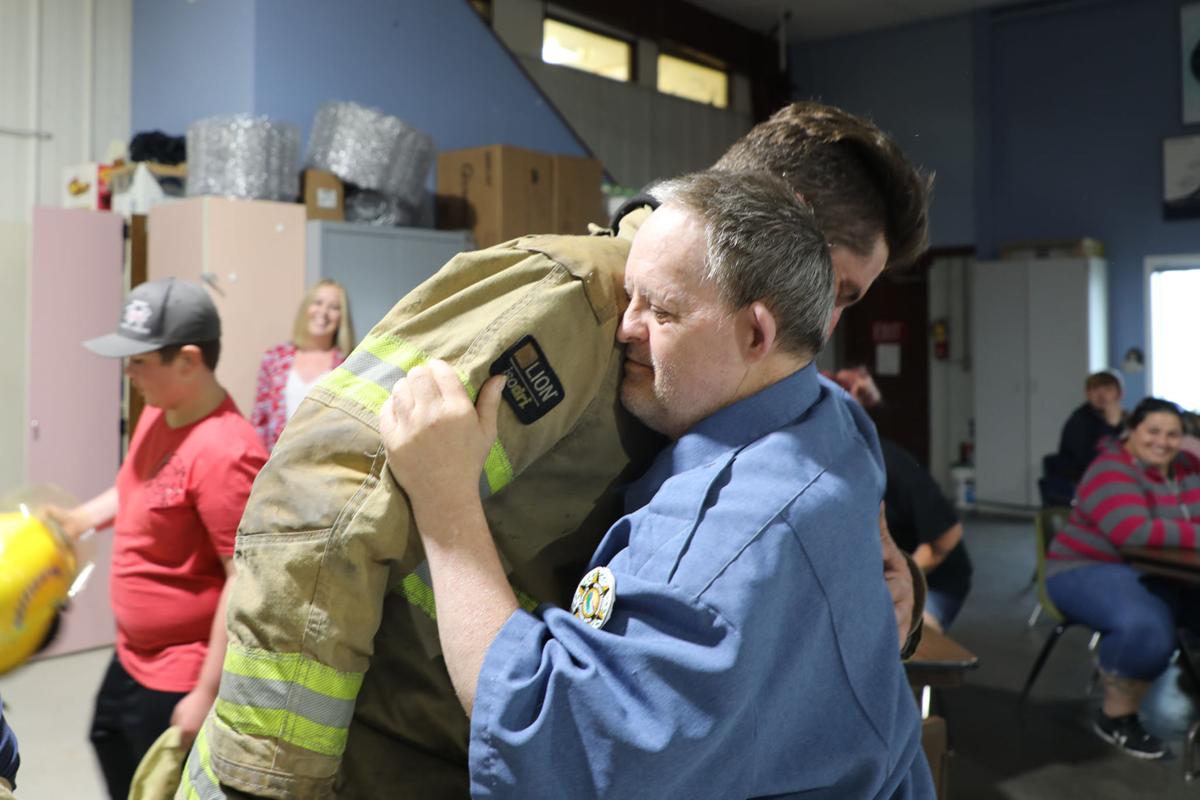 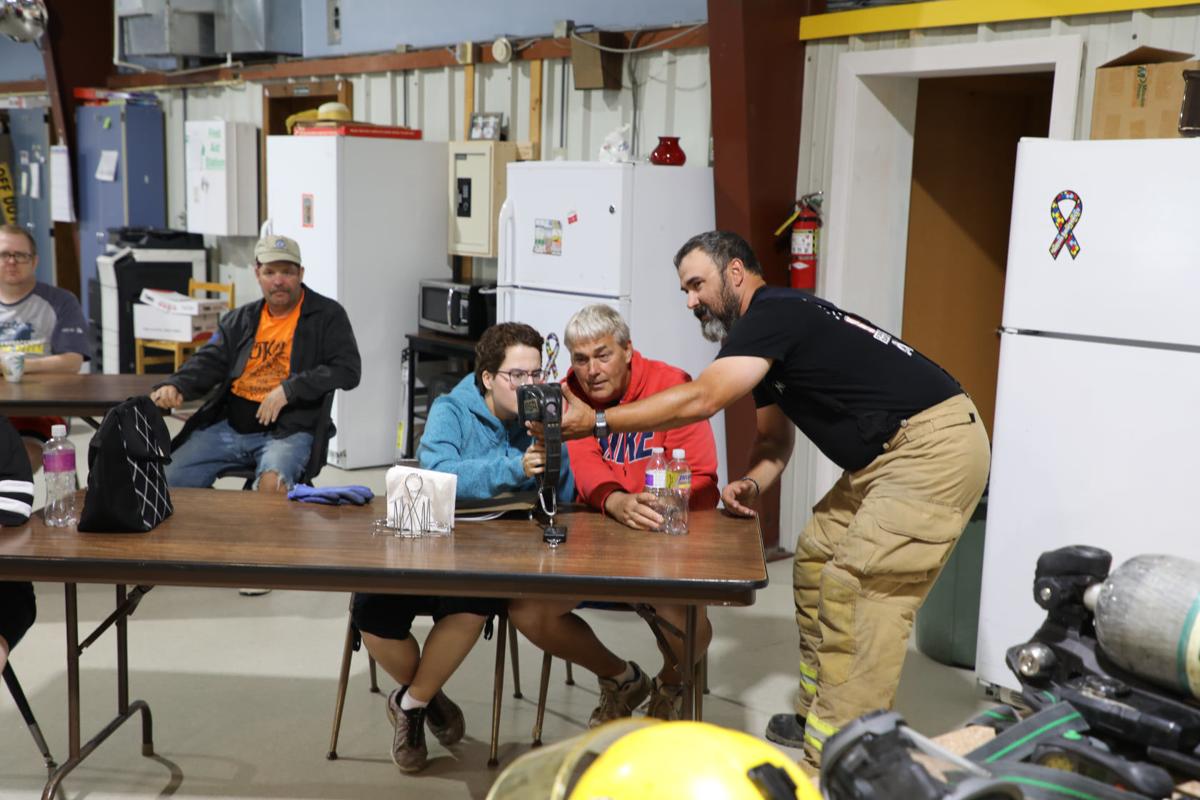 A firefighter shows an ROI client what it's like to peer through a viewfinder. 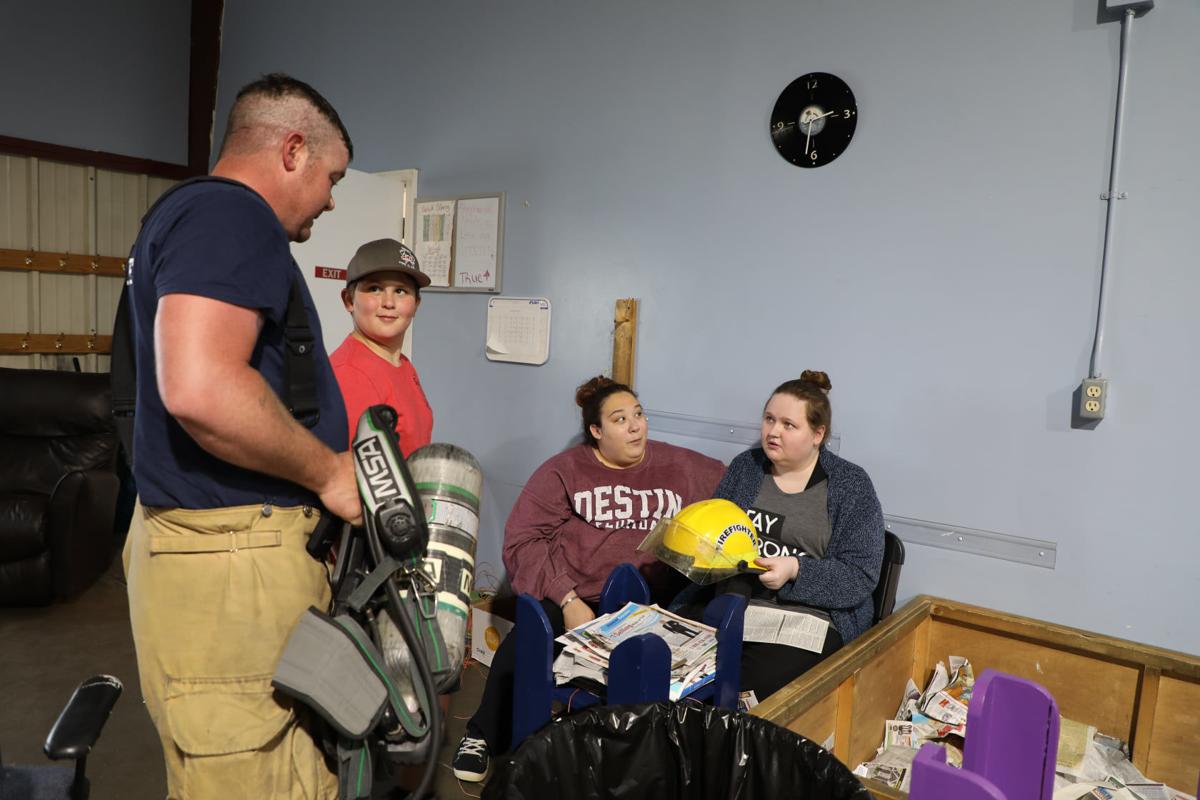 An ROI client holds a helmet as a firefighter shows how heavy an oxygen tank is. 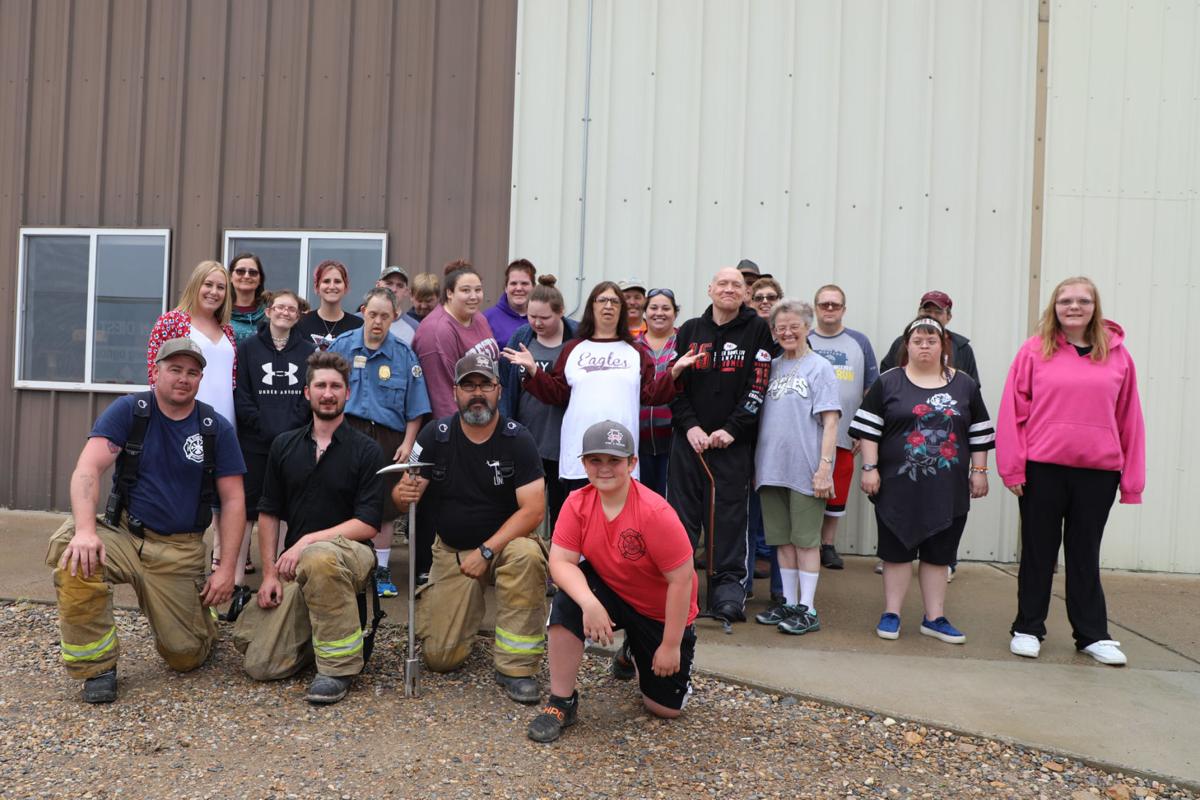 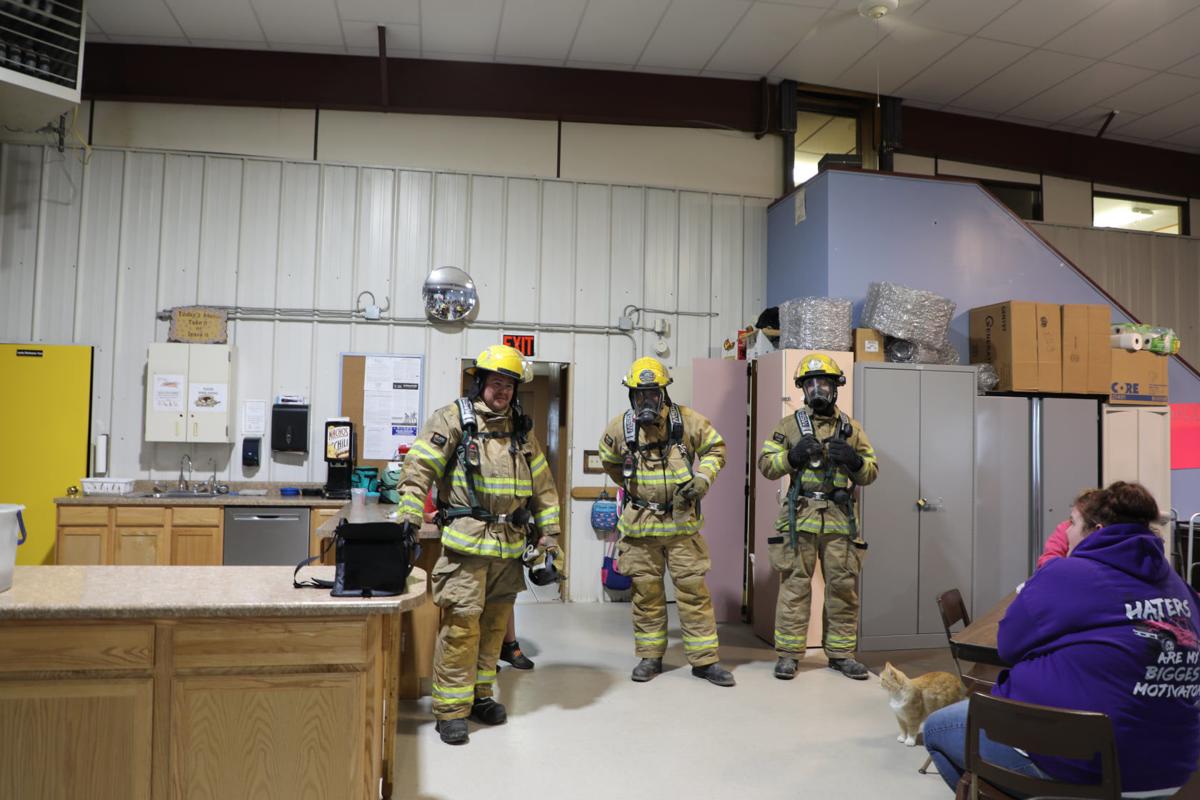 Local firefighters stand inside the ROI facility with their full protective gear and oxygen tanks strapped to their backs.

A county firefighting crew arrive at the Richland Opportunities Inc. (ROI) facility for a demonstration and to education clients.

A firefighter shows an ROI client what it's like to peer through a viewfinder.

An ROI client holds a helmet as a firefighter shows how heavy an oxygen tank is.

Local firefighters stand inside the ROI facility with their full protective gear and oxygen tanks strapped to their backs.

Imagine their surprise. A group of local firemen showed up at the Richland Opportunities Inc. (ROI) facility on Tuesday, June 30, for a special visit.

For the 20 or more ROI clients on the receiving end, it was more than an honor and a privilege to have a team of professional early responders drop by in their polished fire engine truck, dressed in full gear.

It was an educational experience.

“Oh my gosh, they were on Cloud Nine,” said Jenelle Stoner, executive director of ROI. “First off, they felt special.”

It all began with what Stoner described as a previous “scary visit.”

Stoner is referring to an incident that occurred about a month earlier. A Richland County Fire Department crew showed up at the ROI facility for an emergency call. They were dressed in full gear, including helmets with face shields and smoke ventilators.

To hear Stoner describe them, the emergency responders resembled Marty McFly from the blockbuster film, “Back to the Future.” From the perspective of the clients at ROI, the Richland County firefighters were dressed like unfriendly visitors from another planet.

As Stoner pointed out, it can be intimidating for anyone unfamiliar with the full-protective gear firefighters often wear when they show up for an emergency. For the clientele at ROI, unaccustomed to such a sight, it can be downright scary, she said.

Jake Carlsen, among the local firefighters who came to ROI on both occasions, conveyed to Stoner he was taken aback at how afraid the clients appeared when the firefighting crew arrived for a real emergency a month ago.

“Jake reached out to his mom,” Stoner said, after realizing the clients at ROI might appreciate a friendlier follow-up visit.

“‘Why not show them that we’re nice guys — show them a little of our equipment,” she said, describing Carlsen’s motivation for returning to the ROI facilities under less stressful circumstances.

“It was a very coordinated event,” Stoner said. “We had at least 20 participants.

“They were here for a couple of hours,” she said of the return instructional visit. “They took their time, and they did not rush out.”

Stoner referred to the second event as a way of “normalizing” the local fire department.

To hear her describe the initial emergency at ROI, it makes sense that anyone would be afraid of several able-bodied fire-fighters, bursting into a building in full protective gear, complete with oxygen tanks strapped to their backs.

ROI’s executive director, who grew up in Richland County and recently returned to helm the organization, said the clients were particularly fascinated by the oxygen tanks.

“They showed them the tank and the noise it makes,” she said of the demonstration. “They let them see it and hear it.”

Although some of the clients were traumatized by the initial experience a month ago, this time they were better prepared for the visit.

“They walked in, in all of their gear,” Stoner said of the local firefighting crew’s second visit. “We wanted them [ROI clients] to experience what they would see if they [responders] walked into a fire.

“One of my clients, who is a bit more verbal, said, ‘They weren’t scary at all,’” Stoner continued. “One of the firemen talked about how heavy the gear is. He said it’s about 100 pounds...they thought that was pretty cool.”

One of the crew, Brandon Roth, took off his gear and laid it out, Stoner explained. He then demonstrated how quickly he could put it all back on. ROI clients were super impressed by that demonstration, she said.

“From my perspective it was just neat seeing how they were interested in doing this,” Stoner explained. “They saw the need and they reached out to us on how they could help the participants. They had their hearts in it...they were here for all the right reasons.”

Stoner pointed out one of the photos she sent of a firefighter interacting with an ROI client spoke volumes about how much they appreciated the visit from Richland County firefighters. She also complimented the crew on their earlier perceptions.

“They recognized where the fear lies and they wanted to alleviate that fear,” Stoner said.

After about two hours, they received an emergency call and had to leave, she said. Before they left, however, they gave Stoner some added reassurance.

“They let me know, ‘We are here anytime’ if we need them.”

By the end of the day, the message was clear.