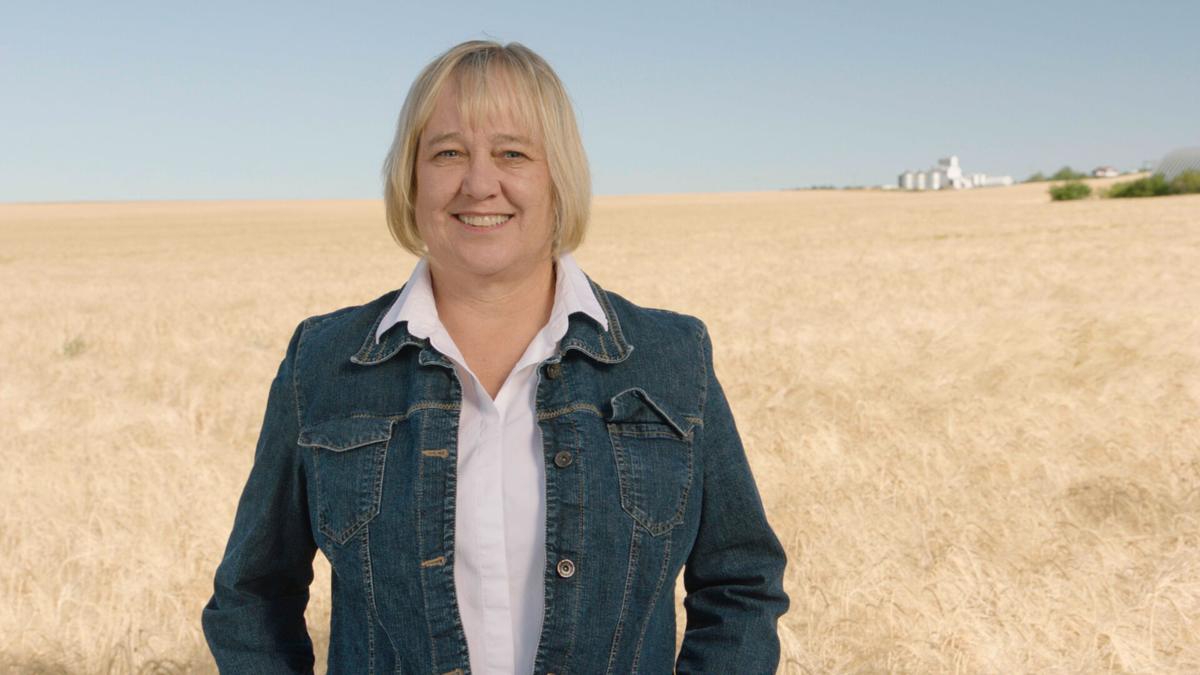 Kristen Juras — a fourth-generation Montanan — grew up on a ranch in Conrad, became an attorney, and then a legal scholar. 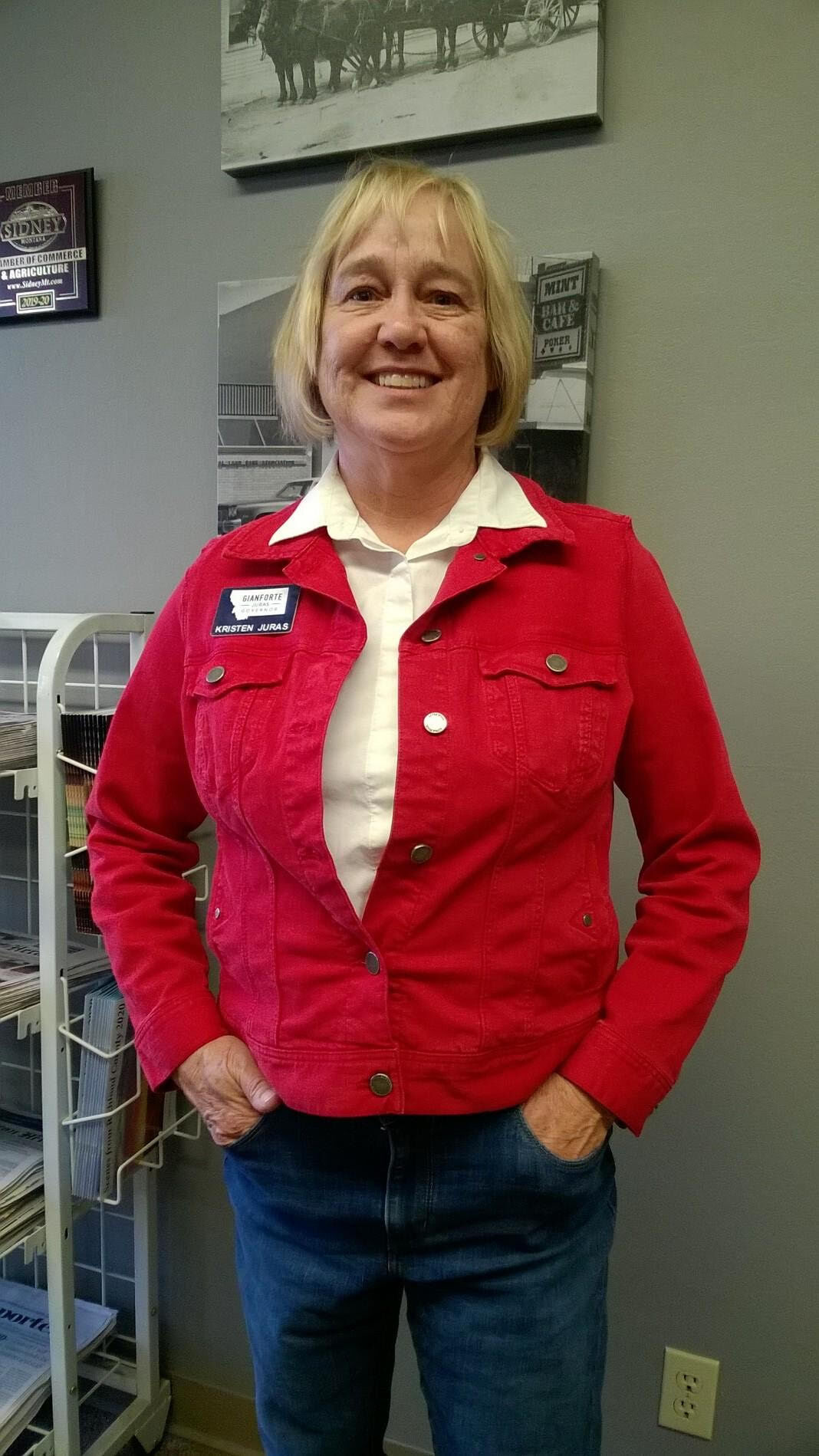 Kristen Juras, GOP candidate for Montana Lt. Governor, makes no secret about her fondness for the color red.

Kristen Juras — a fourth-generation Montanan — grew up on a ranch in Conrad, became an attorney, and then a legal scholar.

Kristen Juras, GOP candidate for Montana Lt. Governor, makes no secret about her fondness for the color red.

During a recent visit to the Sidney Herald offices, Kristen Juras was relaxed and well-prepared. The Republican Lt. Governor candidate also appeared fearless.

Not that there’s anything to fear from the press. When it comes to candidates for public office, however, a bit of posturing and defensiveness seems par for the course these days.

Not so with Juras.

Perhaps it’s her background as a college law professor. Perhaps it’s her disarming style. Either way, Juras is prepared to answer questions and clarify misconceptions about her positions — and her motivation for becoming the next Lt. Governor of Montana.

“Greg and I are advocates for eastern Montana,” she said about her reasons for visiting Sidney and Glendive.

Juras had just toured a beef-processing facility in Richland County, she said, jumping right into an issue that confounds ranchers in the community.

Plain spoken but ready to “dive into the weeds” on legal matters if necessary, the adjunct professor for the University of Montana School of Law said she understands issues that are important to Richland County. Namely, ranching and farming, beef and wheat prices, oil and gas exploration.

“One thing Greg and I want to see is more [beef] processing facilities in Montana,” Juras said, citing unfair competition as a barrier to independent ranchers in eastern Montana who want to compete with the “Big Four” meat companies from other regions.

Although she cited agriculture as the number-one industry for most Montanans, Juras said she and Gianforte are committed to fighting beef monopolies in federal court if necessary. Both candidates are prepared to continue investigating anti-competitive practices among big beef companies, she added.

The daughter of a veterinarian, Juras seems as comfortable talking about the slaughter of cattle as she is the price of beef — and the complex laws that drive the industry.

“Most Montana producers right now would say they are not getting fair prices for the [cattle],” Juras declared, emphasizing Rep. Gianforte has not let up on Congressional investigations into anti-competitive pricing within the beef industry.

Juras is careful to preface all her statements as a running mate.

“We support the production of our natural resources in an environmentally responsible manner,” she said. “We do not think the two are mutually exclusive.”

It’s an interesting choice of words: produce. Opponents often accuse Republicans of “exploiting” the state’s natural resources. For eastern Montanans who rely on the production of oil and gas to earn a living through good-paying jobs, however, the term exploit does not sit well. They have families to feed, kids to educate — bills to pay.

Juras seems to understand what drives Richland County’s economy. She is well-educated and technologically adept. She speaks of the present plight facing oil and natural-gas drilling industries in future terms, as if there is a lot riding on the November 2020 election, when Montanans will decide whether to elect Democratic candidate Mike Cooney or his Republican opponent, Gianforte.

There are stark contrasts between Cooney and Gianforte, as well as Juras and Lt. Gov. candidate Casey Schreiner. Whereas Schreiner was a K–12 public-education teacher who taught children with learning disabilities, Juras is a retired law professor who specialized in helping sharp, aspiring attorneys understand how to win in court.

For Juras, it seems to boil down to embracing technology without allowing it to rule one’s life. That axiom not only stands true in classrooms, where computers and distance learning are finally catching on, it applies to oil fields as well.

“We have to [adopt] technology to use coal in an environmentally safe manner,” Juras said, claiming Montana is the largest coal-mining state in the country.

The key difference, she said, is Montana has an abundance of “clean coal.” Juras cited Japan as one nation that’s moving away from accident-prone nuclear power and moving toward clean coal as an alternative energy source.

Japan, Juras said, is fond of importing coal from Montana.

If Democrats win in November — both nationally and in the Treasure State — coal mining and oil-production will suffer. That’s no secret.

“Right now, coal is being transported through Canada, which adds costs,” Juras said, pointing to Washington State for violating U.S. interstate commerce laws by refusing to allow Montana to ship coal through its Pacific ports.

Without missing a beat, she addressed the importation of oil from Canada into the United States through North Dakota, and possibly Montana.

“Greg and I support the construction of the Keystone Pipeline,” Juras said, pointing to Jordan as one locale where residents reportedly want the pipeline constructed.

Moving to the current state of affairs — rioting and the killing of police officers — Juras declared she is 100 percent in favor of protecting men and women in uniform.

Returning to the subject of technology, Juras made clear the future lies in engineering and science jobs, particularly for graduates of Montana universities.

“We export too many of our children and grandchildren, and we want to bring them home,” she said, crediting entrepreneurs like Gianforte with creating good-paying engineering jobs.

“Business experience and leadership” are what drew Juras to Gianforte, she said. “Because of Greg my son was able to come home...because of the increased demand for high-tech workers.”

Juras continued: “We want to create opportunities, not just in high-tech but in agriculture and other small businesses, so we can stop exporting our kids and grandkids.”

Although she was running late for another appointment in Glendive, Juras took time to address an important question on some voters’ minds.

Why is she supporting Greg Gianforte, a New Jersey native and multi-millionaire accused by opponents of exploiting Montanans for his own personal financial gain?

“Greg and I complement each other,” Juras explained. “Greg has a business background. I have been practicing law for 38 years, helping ranchers, farmers and small businesses navigate the legal issues they face on a daily basis.

“Greg comes from a high-tech background and I have deep agricultural roots,” she continued. “I’m a fourth-generation Montanan raised on a ranch. I want to be an advocate for our number-one industry — agriculture — in the governor’s office.”

Then, like a buttoned-down law professor who favors free enterprise over big government, Juras served up her closing argument: “I don’t see my role as cutting ribbons, but cutting red tape to streamline regulations and improve the business climate.”

If it all sounds rather conservative, it is. With her red denim jacket, Juras literally wears the Republican Party colors on her sleeves.

The adjunct law professor makes it clear she is campaigning for Lt. Governor as Gianforte’s running mate — his second-in-command.

“Greg is a very effective Congressman,” Juras stated, explaining why she said yes to joining his ticket. “Greg will be even more effective to improve the lives of Montanans as a governor.”

What are they saying?