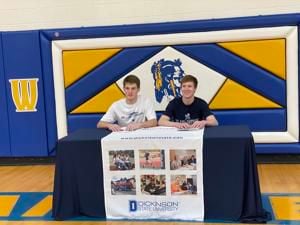 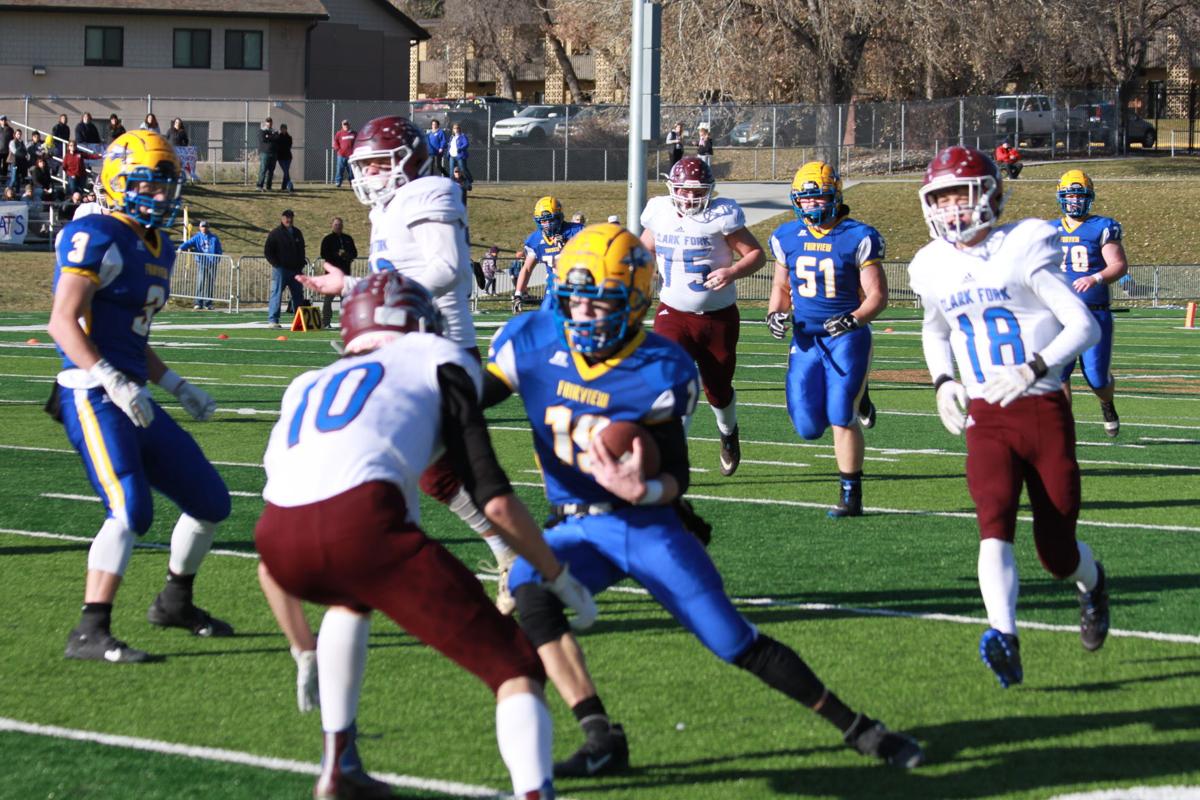 Breaking a tackle in the eight-man football championship game this past season is Fairview senior Alex Schriver in the matchup against Clark Fork at Rocky Mountain College in Billings in November 2019. 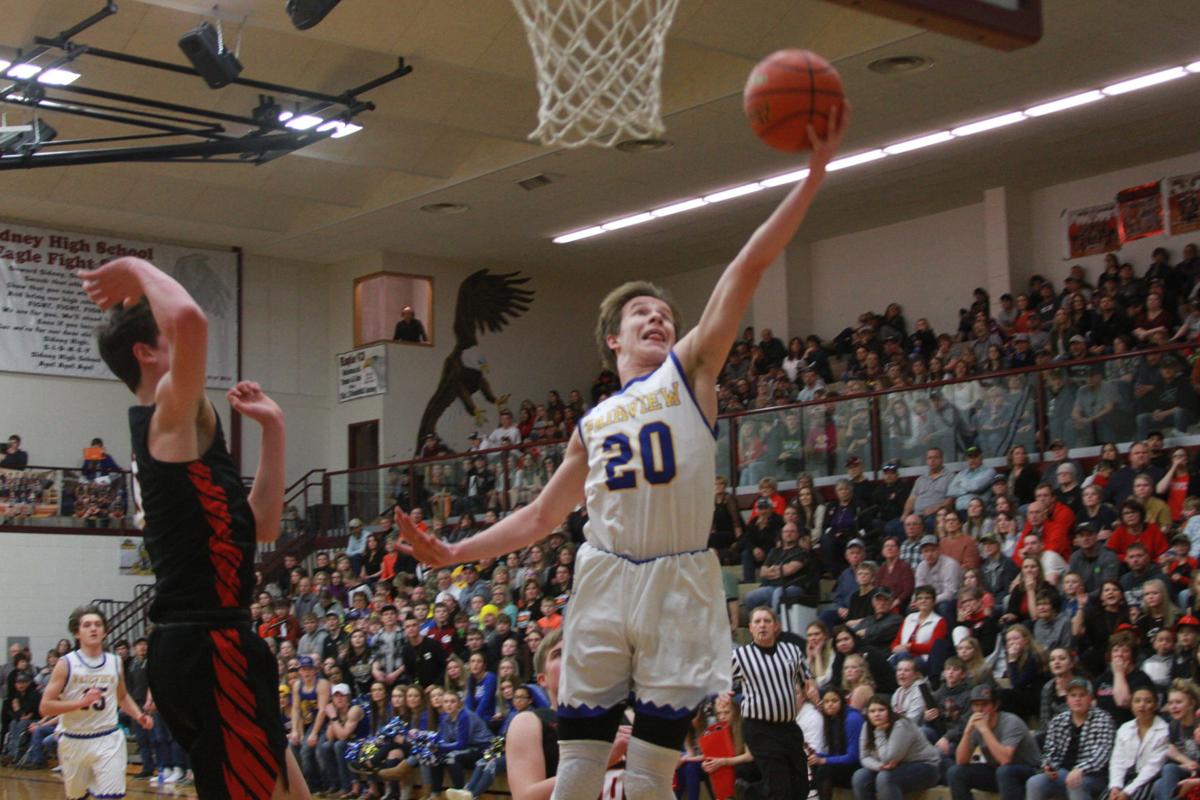 Going up for the layup in a matchup against Froid/Lake during the season is Fairview Warriors all-around athlete Alex Schriver.

Breaking a tackle in the eight-man football championship game this past season is Fairview senior Alex Schriver in the matchup against Clark Fork at Rocky Mountain College in Billings in November 2019.

Going up for the layup in a matchup against Froid/Lake during the season is Fairview Warriors all-around athlete Alex Schriver.

Growing up with an older brother and sister, Alex Schriver was the youngest of three, but the competitive nature of the family was bestowed upon him at a young age.

“Everything was a competition from basketball, football, golf and baseball to playing cards in the house or video games,” Alex Schriver said, alluding to his brother, Brock, 25, and sister, Bailey, 23. “They never took it easy when we played each other.”

Schriver is thankful for the impact his siblings had on him in many other ways as well.

“They have always been there for support and to encourage me,” he said. “They made me feel bad for just sitting around doing nothing when I could have been shooting hoops or playing catch. They always pushed me to be better.”

Schriver, 18, is currently a senior at Fairview High School. He finds himself looking back at his time growing up in Fairview after he and his family moved from Wolf Point when he was 4.

“Growing up here was a blast. Being able to ride your bike or walk to your friends’ houses was something I’ll never take for granted,” Schriver said. “Growing up with my friends was crucial to how we play together. We were so connected on and off the court...field from the time we were just kids to the last year playing together on the big stages.”

The big stages are where he and his Fairview Warrior teammates ultimately ended up this past season on the gridiron and the court. They secured a 77–6 win over Alberton Superior in the eight-man football state championship game at Rocky Mountain College in Billings. Also, they reached the 2020 State Class C Boys’ Basketball Championship in Missoula before it was abruptly ended due to the COVID-19 pandemic.

Schriver tallied three interceptions and a pick-six in the championship football game back in November 2019.

“The whole game is something I’ll never forget,” he said. “I played my best game by far, just very blessed to go out with a bang.”

Those championship runs were things Schriver will remember forever. Still, he was rightfully bummed that Fairview didn’t get its shot at a rematch against Scobey in the basketball championship after losing in the divisional championship round.

“We wanted that rematch so bad,” he said. “We were the underdogs and the ones with a chip on our shoulder. We spent all week preparing for that game. We had a great game plan. We had a lot of momentum coming off a big game the night before, so everyone was heartbroken when we got the news.”

In addition to excelling on the football field and the basketball court throughout his Fairview high school career, Schriver also starred on the golf team. He ultimately chose golf as the sport he wants to play in college, signing a letter of intent to play golf at Dickinson State University and major in Pre-Med.

“Deciding to play golf was one of the hardest decisions I have made,” he said. “I love all three sports, but golf just has a different feel. I enjoy playing for a team and being a part of that family, but at the same time, playing by yourself gives you a whole different meaning.”

Despite receiving offers for football and basketball, he is confident that attending Dickinson State University and playing golf was the best decision for him.

“Choosing to attend Dickinson was tough. While on my visit, I got to see just how inviting the school was, along with the hometown atmosphere,” Schriver said. “The head golf coach, Thad O’Donnell, was amazing; he was the one who contacted me about playing golf at DSU.”

O’Donnell is anxious to bring Schriver onto the Blue Hawks team and into the Dickinson community.

“Alex is a great young man. My son-in-law is the golf coach at Wibaux and was the first one to tip me off to Alex,” he said. “Alex came down for a visit and I was very impressed with the young man without ever seeing him swing a club. He is the type of person every coach wants on his team. He is driven, humble, and a team player. His accomplishments in high school in three different sports shows he is a heck of an athlete. We have a good class coming in this fall and in golf, like other sports, the chemistry is key to success. Alex strikes me as a leader that helps develop chemistry without overselling it and we’re excited to have him in our program.”

“Cody and Lak have been my best friends since I was in kindergarten,” Schriver said. “Having them along just adds to how excited I am to be attending Dickinson...and being away from home is going to be much easier with them around.”

With the continued playing of the spring sports season yet to be determined due to the pandemic and not having an opportunity to get back on the course with his teammates, Schriver has found ways to keep occupied. He is ready to swing outdoors when the golf season begins.

“With the courses not open yet and the golf simulators shut down, I have been stuck putting and chipping in my house. I even got a golf net and a mat in my garage that I use daily.”

Schriver is eager to get back on the course, especially for one final time with his Warrior teammates.

“As a team, we’re looking to grab another trophy. We missed a trophy by one stroke last year,” he said. “My teammates and I spent a lot of time on the course and in the simulators during the offseason. We got better and we knew that we had a chance at another trophy.”

Even if the golf season is canceled, Schriver couldn’t have imagined a better senior year and experience as a Fairview Warrior.

“Just the overall success of my class, we made it to state all four years in basketball, playoffs every year in football, and I placed every year in golf,” he said. “I couldn’t have asked for a better way to end my athletics career.”