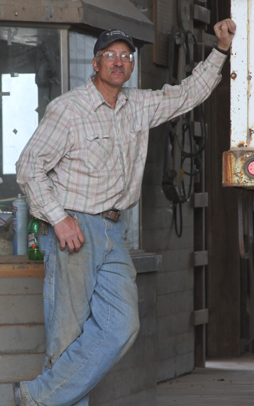 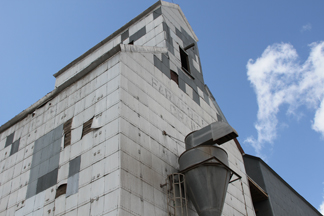 Lambert’s grain elevator is scheduled to be demolished this summer.

Lambert’s grain elevator is scheduled to be demolished this summer.

For nearly 100 years, Lambert’s grain elevator has stood as a landmark in the rural prairie community.

The 80-foot high structure made from old growth Douglas Fir timber is as old as the community itself, which was established in 1914, but by the end of the summer, the elevator will no longer tower over the small town. Nortana Grain Company abandoned the facility March 1 and demolition is set to began any day now.

“We’d both be able to retire rather famously if we had a penny for all the bushels of grain that went through it,” said Sheldon Heringer, a lifelong Lambert resident who has worked for Nortana since 1987.

Heringer has spent more time in the elevator than anyone still alive to talk about it. Since joining Nortana as a part-time bookkeeper, he has held nearly every job imaginable at the company, including serving as its general manager for two years in the early 2000s. He is currently the manager/operator of Nortana’s Lambert location.

Heringer said construction of the elevator began between 1913 and 1914. It was finished in 1917 just before the railroad reached Lambert. “The railroad was moving this way, and they moved materials ahead and built the elevators, so grain came from the west and when the railroad got here, they were full and ready to go,” he said. “This one’s been functioning ever since.”

Faded lettering on the front of the structure hints at the elevator’s past. While it has been managed by the Nortana Grain cooperative since 1983, “Farmers Union Grain Co.” is still written in all caps on the front of the building. The Farmers Union co-op took over management of the elevator 78 years ago, and kept that name until it was changed to Nortana in 1983. “Most of the grandparents of the people we’re doing business with now actually started that co-op,” Heringer said.

While he may be a little sad to see the elevator go, what it represents is far more important than the building itself, and that is something that will live on as long as farmers continue to plant their crops every spring. “If you’re working in the farming industry, it just seems like the right thing to do,” Heringer said. “It’s what God created us to do. Grow stuff and feed people. If I can help people do that better, I feel good about it when I get up in the morning, I feel good about it when I go to bed at night. The work is long, the work is hard, it’s dusty, but it’s rewarding.”