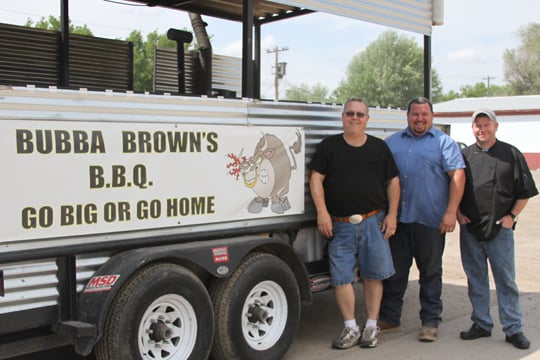 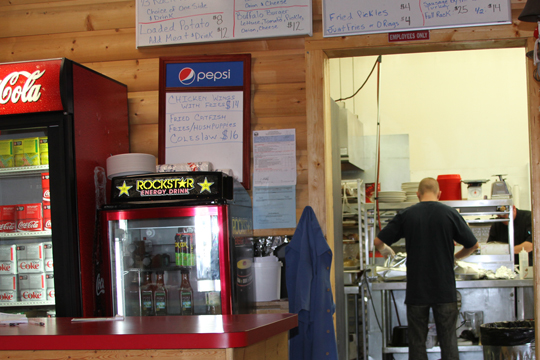 A look inside the kitchen at Bubba Brown’z BBQ.

A look inside the kitchen at Bubba Brown’z BBQ.

A new smell fills the air in downtown Fairview these days.

Whether strolling through town on foot or driving down Ellery Avenue, one can detect the scent of slow-cooked pulled pork, sausage and ribs from the street. The aromas emanate from an almond wood-burning barbecue pit set up next to the old Wagon Wheel Cafe, which now goes by the name Bubba Brown’z BBQ.

For nearly two months, Bubba Brown’z BBQ has been serving up Texas-style barbecue to longtime residents and oil field workers alike. The new restaurant is owned by Bubba Stelter, a colorful Texan whose forays in the restaurant business have allowed him to serve entertainers like Ray Charles and Wayne Brady among others, Eric Brown, an off-road racing enthusiast from northern California, and Matt Zinsmeister, a culinary school graduate from Indiana. Combined, the three men have approximately 70 years of experience in the restaurant business. Stelter previously owned a restaurant in Houston called “Sonora Del Norte,” Zinsmeister has worked as a pastry chef and line cook and Chicago and all three have been involved in the food business in Las Vegas.

They came to Fairview from Las Vegas looking to capitalize on the business brought by the oil boom. So far they’ve been flooded with customers. “We haven’t had a day off since we opened,” Stelter said.

The restaurant serves barbecued pulled pork, brisket, ribs, sausage, turkey and chicken, as well as burgers. “Barbecue really fit this area,” Stelter said. “You’ve got oil workers from all around the world. There aren’t many vegetarians up here, they’re meat and potato guys.”

Stelter said their most popular item is their ribs as they’ve been selling 30-50 racks a day.

Serving barbecue allows the partners to operate with a small staff, which is essential given the current labor shortage. “You don’t have to have many waiters and waitresses to do this,” Stelter said. “We cook all of our barbecue at night, we smoke it all night long.”

This allows Bubba Brown’z BBQ to serve food quickly, making it a convenient stop for oil field workers and truck drivers looking to pick up food to go. Stelter estimates 40-45 percent of the restaurant’s business is carry-out. “One of the reasons we went barbecue is we’re not cooking each plate to order,” he said. “That’s why everything is ready in three to five minutes. It’s fast.”

The idea for Bubba Brown’z BBQ was hatched in August when Stelter approached Brown about opening their own restaurant. They had been doing catering together in Las Vegas at the time, and Brown had just returned from an off-road race in Salt Lake City. “I came back unhappy because there was no food to eat up there,” Brown said. “He comes back and says, ‘I want to build a barbecue.’”

Bubba Brown’z went on tour with the racing series and was an immediate success. In February, Zinsmeister, who had been a waiter and bartender at an Italian restaurant in Las Vegas, joined the venture, and they began looking for a permanent location.

After some research, the three partners decided they wanted to open a restaurant in the MonDak region. “Eric had a couple friends who had been up here doing other work, and they said there weren’t really any good places to eat between Sidney and Williston (N.D.),” Stelter said. “So we came up here and ate in a lot of different restaurants and saw that there was a lot of opportunity for us.”

While searching for a location for their new restaurant, Stelter and Brown sat down to eat at the Wagon Wheel Cafe in Fairview. They thought it was in an ideal location and decided to make an offer on the building.

Since taking ownership of the old Wagon Wheel Cafe, the partners have remodeled the kitchen and replaced the booths with tables, and they say more changes are on the way. “We’re just going to get bigger,” Brown said.

“This is a busy town at three in the morning,” Stelter said, noting he’s seen oil field workers line up at the Loaf ‘N Jug convenience store to buy food in the early morning hours when no restaurants are open. “We feel sorry for them that they really don’t have a choice,” he said.

Stelter said the early morning menu would likely include nine or 10 items from breakfast food to burgers. He would also like to begin serving fajitas and burritos to offer customers more variety. “I don’t want to burn people out on barbecue,” he said. “We keep expanding our menu so everyone gets a little variety.”

“Bubba tells us a lot of stories about Texas because we’ve never been there,” Brown said. “He’ll get into the story and then a third of the way into it he’s like, true story, so we always give him a bad time about the true story part.”

Stelter, Brown and Zinsmeister also intend to open restaurants in Sidney and Williston, N.D. “We have plenty of people in Las Vegas,” Stelter said. “They’re just waiting on us to bring them up here.”