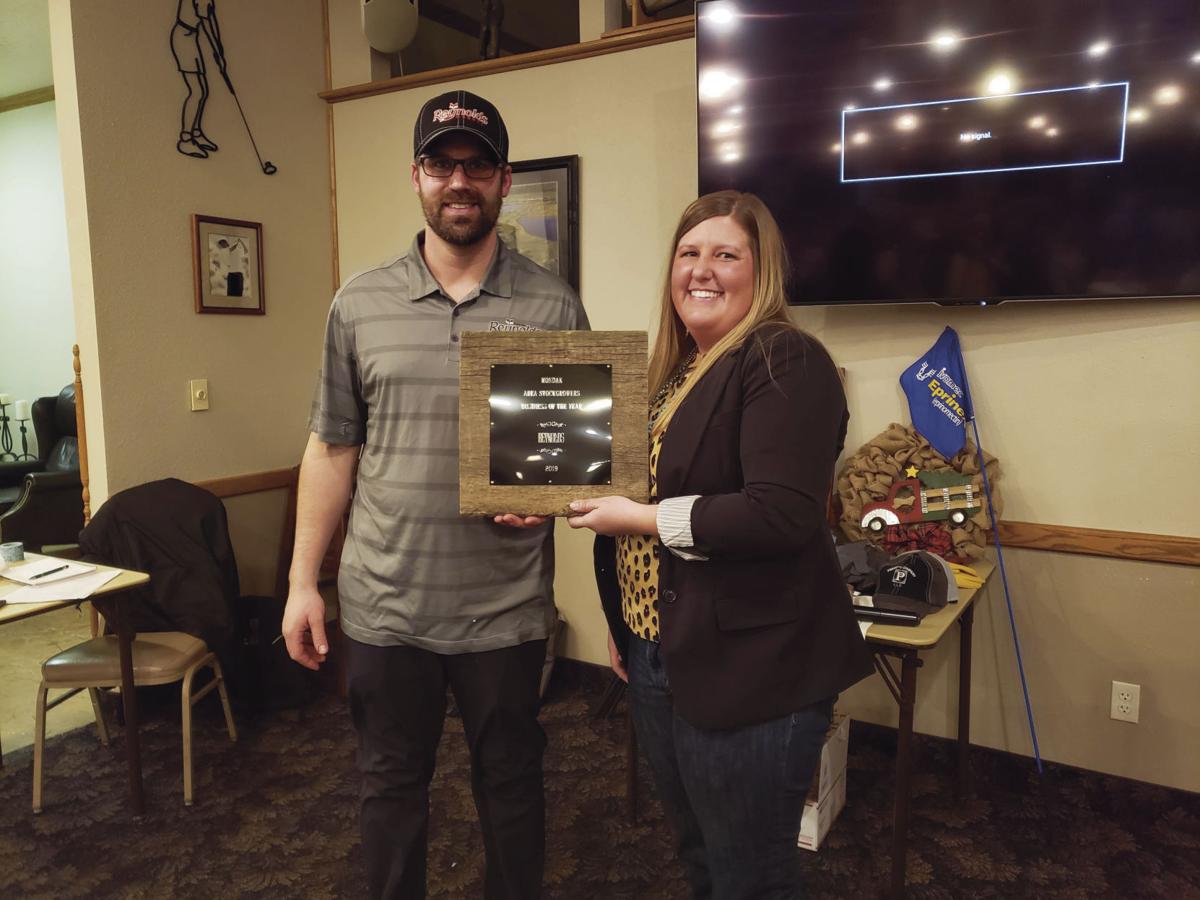 Josh Reynolds, manager of the Reynolds Meat Department, accepts a plaque for Business of the Year from newly re-elected president of MonDak Stockgrowers Association Katelyn Dynneson Larson during the organization’s annual meeting. Larson said Reynolds was selected for the award because of its efforts to keep front and center of meals, as well as its willingness to help whenever needed. 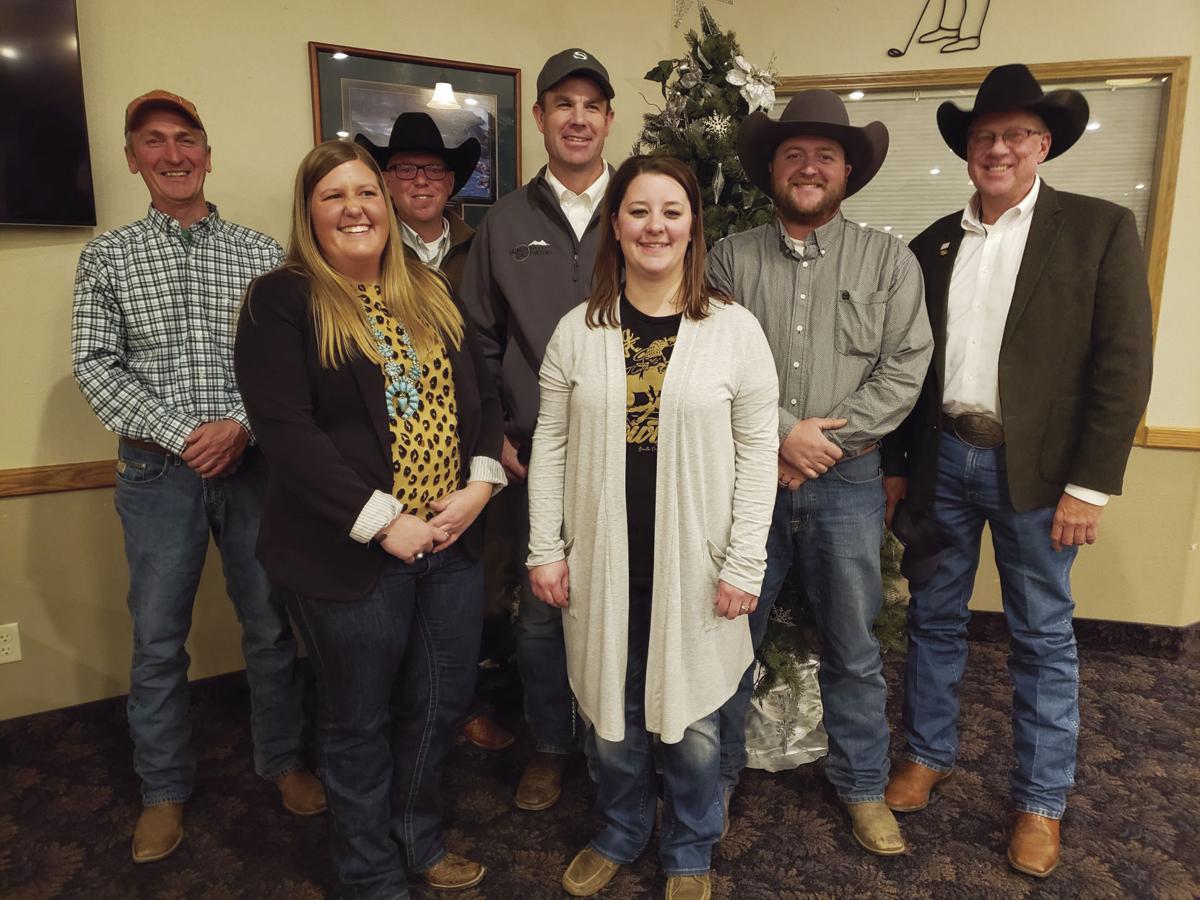 Josh Reynolds, manager of the Reynolds Meat Department, accepts a plaque for Business of the Year from newly re-elected president of MonDak Stockgrowers Association Katelyn Dynneson Larson during the organization’s annual meeting. Larson said Reynolds was selected for the award because of its efforts to keep front and center of meals, as well as its willingness to help whenever needed.

Letters from both the Montana Stockgrowers and the North Dakota Stockgrowers Association have gone out to Agriculture Secretary Sonny Perdue, pressing for more information about the fires at a packing plant in Holcomb, Kansas.

“We are certainly monitoring that very closely,” said Jim Steinbeisser during his report at the annual meeting of the MonDak Area Stockgrowers. “They are not going full scale, but they will be very soon.”

The subsequent price drop after the fires occurred are also a matter of great concern, and were the subject of separate letters sent to USDA.

Meanwhile, on the trade front, the Japanese government has ratified a deal between the United States and Japan. When it comes to agriculture, this deal is similar to the Trans Pacific Partnership that the Trump administration left earlier in the year. It’s still a very welcome deal for livestock producers in particular.

“That doesn’t need to be ratified by our Congress,” Stenibeisser said. “So it will be a done deal (once President Donald Trump signs it). That is extremely good news for the cattle industry. It’s huge, huge news.”

“Our product was set to get really expensive fairly soon, so we are looking forward to that.”

Ratification of the USMCA agreement appears to be close, but is politically stalled. Steinbeisser has been told there aren’t enough votes, but doesn’t believe that’s true.

As far as China goes, negotiation is still ongoing.

There is a little bit of beef going there now,” Steinbeisser said. “Who knows how that will all work out.”

Two to three weeks ago, false positives for brucellosis in western Montana caused a bit of a stir, Steinbeisser said.

These turned out to be false positives.

“Thankfully, no ranches had to hold cattle back before they re-tested and found it was a false positive,” he said

On the WOTUS front, repeal of that legislation is not enough, Steinbeisser said.

“We need to replace it with something, otherwise a president and a Congress down the road could give us the same type of thing again,” he said.

Another of the big national issues that both stockgrowers associations are tackling is fake meat.

“We had a big win when we got USDA to be in charge of the regulations on fake meat,” Steinbeisser said. “Some of the fake meat folks would prefer FDA take the lead on that.”

Steinbeisser pointed out the dairy industry as an example of what can happen to beef if nothing is done.

“You have noticed how many different milks we have,” he said. “Almond, soy, coconut … That is all a shame in my eyes. Those folks are playing off a reputable product that has been here 4,000 years, and we don’t want the beef industry to go through that same things.”

At the state level

A century-old water dispute appears to be near resolution. Sen. Steve Daines, R-Montana, and Sen. Jon Tester, D-Montana, have both announced support for an agreement resolving that. Senator Daines will be introducing the Montana Water Rights Protection Act next week in the Senate.

The deal relinquishes 97 percent of all the Confederated Salish and Kootenai Tribes water rights claims with prejudice across Montana, and will save taxpayers more than $400 million in tax money. The agreement also protects Montanans’ due process, by giving them access to state courts over water disputes between tribal and non-tribal members.

An environmentalist suit against a bill allowing water water to be piped to state lands either for stock wells or irrigation will be heard in Montana courts.

“We certainly feel like we will be able to win that,” Steinbeisser said. But they feel like they will win it, too. So we will see how that works out.”

American Prairie Reserve, an organization that’s trying to bring a free-ranging bison herd to the plains, has been petitioning BLM to let them tear out interior BLM fences, Steinbeisser said.

“Evidently, because buffalo are so smart that they don’t overgraze riparian areas and so forth,” Steinbeisser said. “They saw they were going to lose that and so they pared it down to one-third of what they were originally asking for.”

Steinbeisser suggested that is just a strategy aimed at setting a precedent, to make getting the rest of the fences torn down easier in the future.

“Hopefully, we get that stopped, too,” he said. “We have been in contact with the Department of the Interior on that, and we are certainly watching that very closely.”

Montana Stockgrower Foundation has a relatively recent program that tracks data on a calf through its lifecycle, available for a donation of a calf or equivalent.

This has been an underutilized program, Steinbeisser said.

“We’d sure like to see more of this area get involved with that,” he said. “The first year that was a little weak on data, but we have that perfected now, and it is pretty interesting to see how your cattle do. We encourage you to do that. The money is put to great use in the foundation.”

Pete Bess, meanwhile, on behalf of the North Dakota Stockmen’s Association, talked about efforts to find additional assistance for producers.

“We just had a board meeting yesterday, and there is some talk about working with some government programs as far as the Bank of North Dakota,” he said. “Maybe we can get some emergency loans to help people out who are short on operating expenses.”

There was also a quiet — but huge — victory for cattle country during the last North Dakota legislative session, Bess added.

“A lot of agricultural property is (tax) exempt,” he explained. “If you are in agriculture, they weren’t taxing the dwelling. They were trying to change that.”

The rules were kind of gray and messy, Bess conceded.

“That was one we thought we would lose,” he said. “We don’t have many votes compared to those in the city, but we came out on top of that, and they actually made it stronger. There’s no longer an income limit to it. So that was a big win.

Ag in the Classroom — Sometime in April

Burgers in the Park — To be determined

Among business items during the MonDak Stockgrowers annual meeting:

• A committee was formed to develop a burgers in the park event, to promote beef.

• Approved paying for a steer scholarship for an area youth.

• Gave new bylaws a first reading. There will be two more readings before they are adopted.