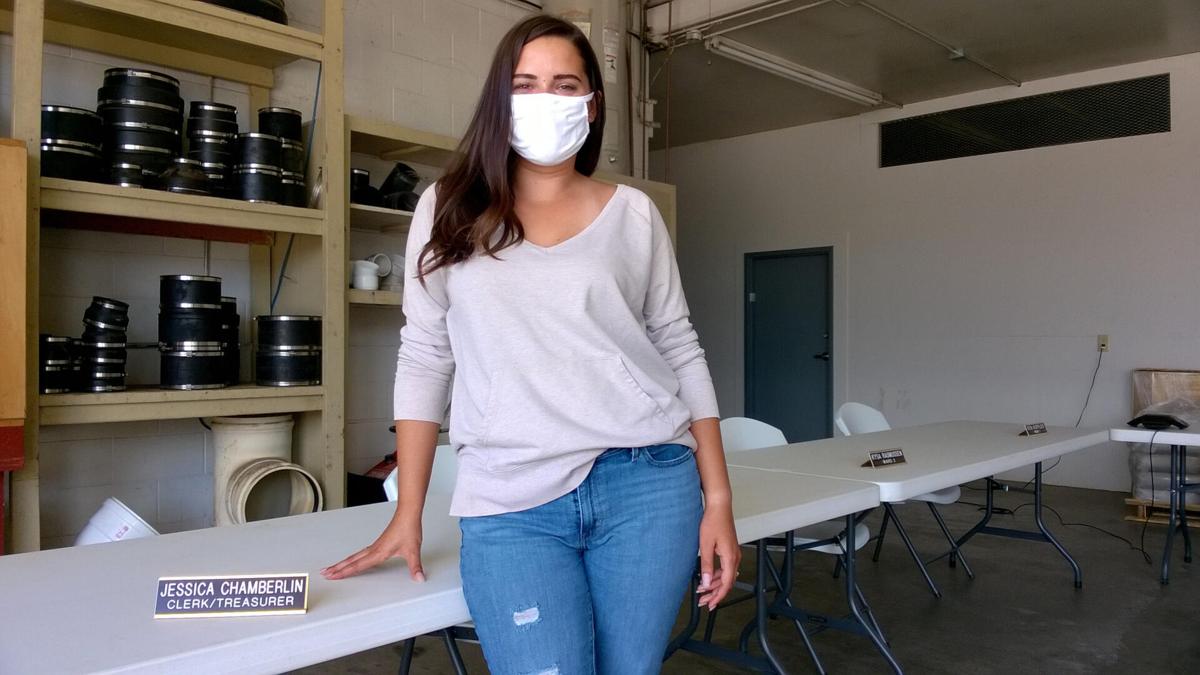 Jessica Chamberlin, Sidney city clerk and treasurer, stands at a table inside the converted fire engine bay, where the City Council met on Monday, July 20. 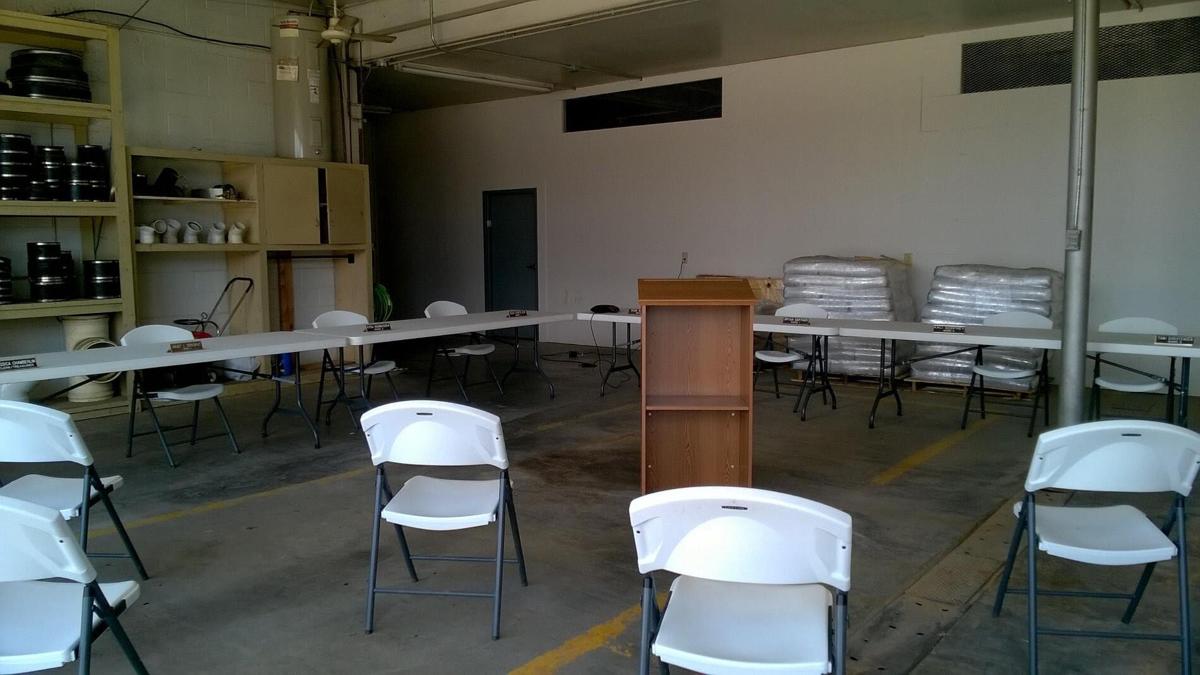 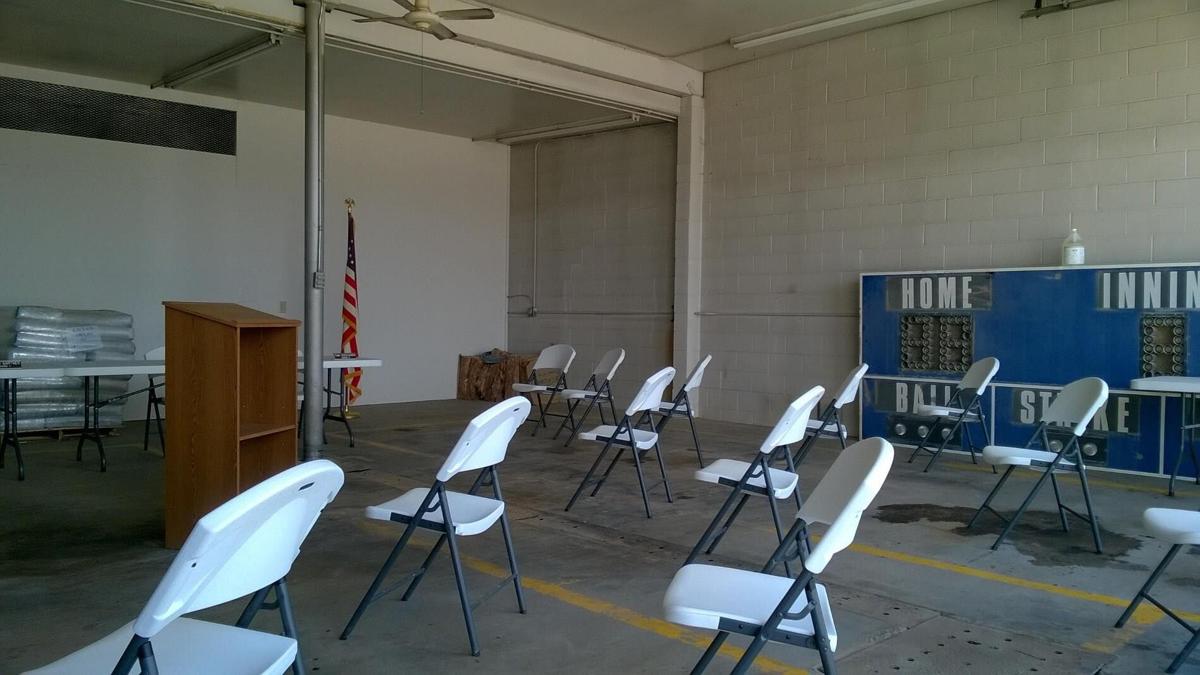 Chairs are set up six feet apart inside a converted fire engine bay at Sidney City Hall to allow the public to attend meetings while wearing facemasks, or electing to stand outside the open-bay doors if they prefer not to wear facial coverings.

Jessica Chamberlin, Sidney city clerk and treasurer, stands at a table inside the converted fire engine bay, where the City Council met on Monday, July 20.

Chairs are set up six feet apart inside a converted fire engine bay at Sidney City Hall to allow the public to attend meetings while wearing facemasks, or electing to stand outside the open-bay doors if they prefer not to wear facial coverings.

The heat was on. Now it’s off. The Sidney City Council has decided to continue making its meetings open to the public.

The council agreed by consensus more than two weeks ago to limit public access to its twice-monthly meetings out of concerns about COVID-19 restrictions.

In a somewhat unprecedented move, the council reversed its decision. Beginning Monday, July 20, the Sidney City Council held its meeting in a converted fire engine bay. This enabled the council to hold its meeting in a manner more conducive to social-distancing mandates and recommendations from the state and local County Health Department officials. It also allows public access to the meetings.

The city council held its most recent meeting in the truck bay at the former firehouse, where city hall is now located. Facemasks are now required for the mayor, city council members, city staff and any participants who wish to sit “inside” the meeting space.

“We actually ended up moving [the meeting] over into the older fire hall,” said Jessica Chamberlin, city clerk/treasurer, explaining the city’s decision not to close its council meeting to the public out of concerns about COVID-19 restrictions and public health recommendations around social distancing.

“We had six visitors, besides the mayor and city council members, and five staff members,” Chamberlin said, noting facemasks were available to those participants who needed one.

At the July 20 meeting enough chairs reportedly were available to accommodate about a dozen public attendees. In addition, the meeting was teleconferenced for anyone — including the city attorney — who wanted or needed to participate via phone-in. Chairs were set up six feet apart, per state social-distancing recommendations. The garage “bay doors” were opened to allow fresh air to flow in and out of the space.

People who choose not to wear facemasks are given the option not to, provided they stand outside the garage area.

“On behalf of the city we don’t really have much choice,” Chamberlin said. “The governor mandates and we just follow.”

“I can definitely credit him with having the idea of having it both indoors and outside at the same time,” Chamberlin said.

It’s a simple solution, but not an easy one.

One glance at the space — compared to the cozy, business-like council chambers in an adjacent building — and one has to credit the mayor and council members for their spartan approach to open meetings. They are giving up the luxury of the normal “council chamber” to ensure council meetings remain accessible to the public.

Chamberlin had suggested at the council’s previous meeting that future official gatherings be closed to the public out of legitimate concerns about the coronavirus. The idea to hold meetings in one of the firetruck bays at the converted firehouse meets three objectives.

1. It enables the council to adhere to social-distancing requirements by setting up chairs six feet apart, and at a comfortable distance from the mayor and council members.

2. It accommodates anyone in attendance who is required to wear masks, including the mayor, council members and city staff, as well as public attendees who prefer to wear facemasks.

3. It gives people who are not required to wear facial coverings and choose not to do so the option to stand outside the bay and still participate in the meeting.

Although no one at the most recent meeting reportedly opted not to wear a facemask, for future meetings Chamberlin said chairs will likely be provided for public attendees who wish to remain outside the meeting space.

“It’s still a work in progress,” Chamberlin said. “The acoustics in there are not the best.

“But it’s definitely what we want to pursue in the future,” she added, noting the acoustics are a bigger issue for phone-in participants who cannot hear conversations because of the facemask requirement for all city staff, including the mayor and council members.

For now, all future Sidney City Council meetings are planned for the indoor-outdoor space at the converted firehouse.