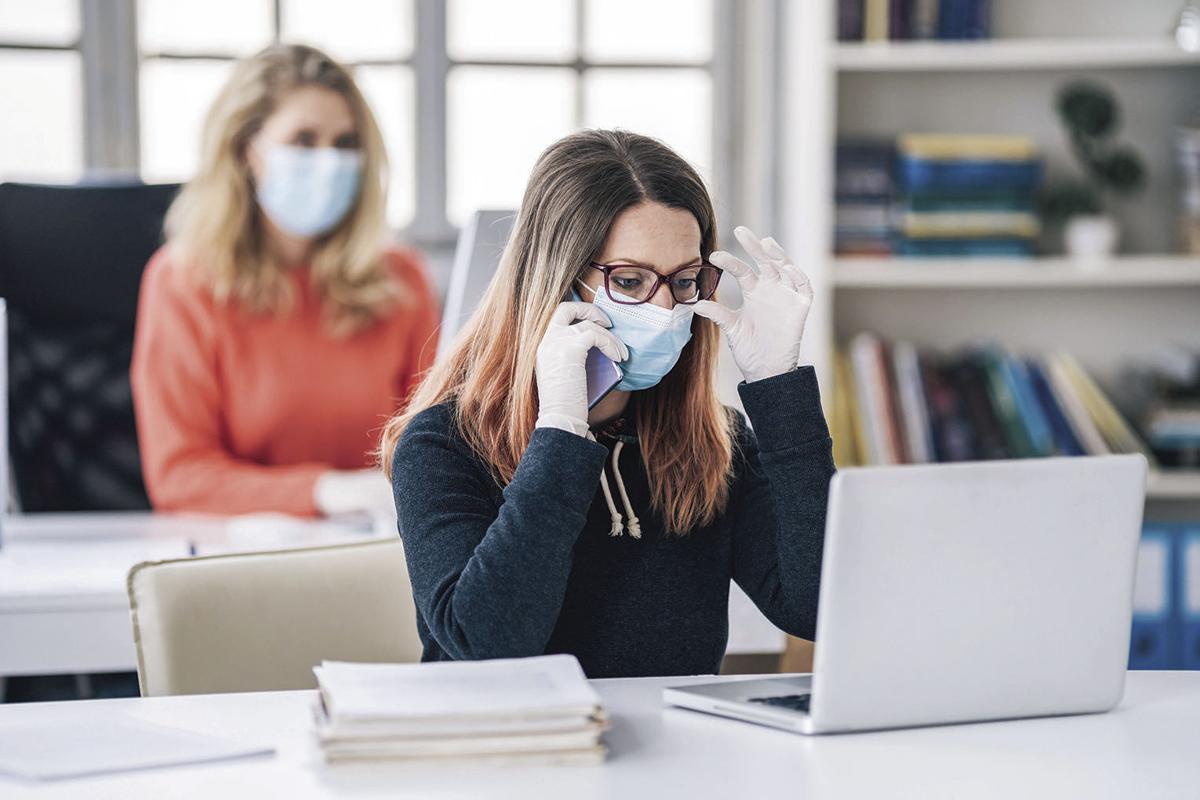 Google and Apple announced a joint effort to help track exposure to the coronavirus using Bluetooth technology. High-tech contact-tracing apps have created a debate over personal privacy versus community health. 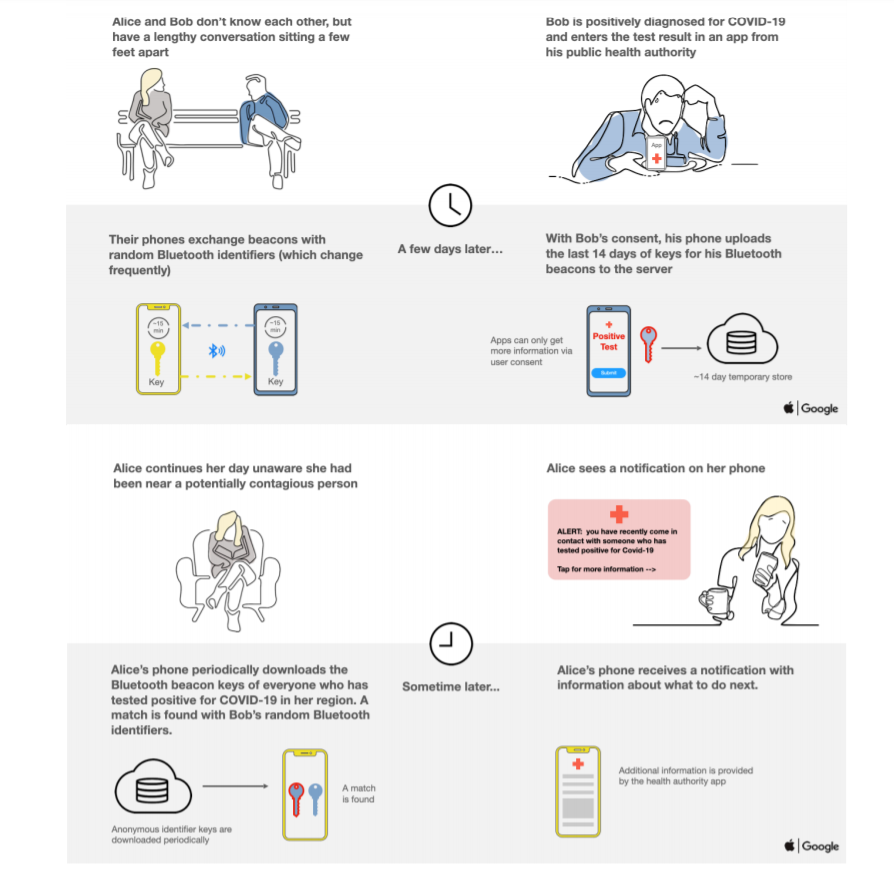 This diagram shows how Bluetooth technology and "beacon keys" are used in contact-tracing phone apps from companies like Google and Apple.

Google and Apple announced a joint effort to help track exposure to the coronavirus using Bluetooth technology. High-tech contact-tracing apps have created a debate over personal privacy versus community health.

This diagram shows how Bluetooth technology and "beacon keys" are used in contact-tracing phone apps from companies like Google and Apple.

Protecting people and getting society back up and running are top priorities for health organizations and governments worldwide. Nevertheless, important questions about reducing the spread of the coronavirus abound.

Is deploying newly developed technology a viable solution to slowing down the spread of the COVID-19 pandemic? Are contact-tracing apps the solution to saving lives and restoring the economy?

Just over a month ago, Silicon Valley tech giants Google and Apple announced a joint effort to help track exposure to the coronavirus using Bluetooth technology. High-tech contact-tracing apps have created a debate over privacy versus human health.

On April 10, 2020 Google and Apple advised that user privacy and security are central to the design of their smartphone apps. The contact-tracing app is available for download through Google and Apple online stores. The app works on either iOS or Android systems.

After downloading the free app, users will be notified if they have been in close contact with an infected person; but only if the infected person has entered that information into the app.

The app does not give the user the location where contact was made, nor does it provide that information to public-health officials.

Many health and government officials are concerned about contact-tracing apps because of potential privacy issues. They are concerned about Health Insurance Portability and Accountability Act (HIPAA) laws. Consequently, some public agencies have begun developing their own apps for contact tracing.

Google and Apple have not backed down from their positions against providing user locations. They argue that letting apps collect location data would undermine a user’s privacy. Additionally, allowing the app to run in the background drains phone battery life, which would likely upset Apple and Android phone customers.

North Dakota is one of many states that has opted to build its own app to assist in contact tracing. Vern Dosch, contact tracing administrator for North Dakota, is overseeing Care19, an app developed by ProudCrowd that tracks a phone’s location using Global Positioning System (GPS) technology.

The app does not track who the user has been in contact with, according to the developer. The technology essentially works as an electronic diary, aiding the user in remembering where they were during the 14 days prior to receiving a positive COVID-19 test result.

“We took extreme care in protecting privacy,” Dosch said. “This app is controlled by the user and can be uninstalled and deleted at any time.”

The Care19 app has been available for approximately three weeks. It has reportedly been downloaded by more than 33,000 people in North Dakota and over 30,000 people in South Dakota.

The initial reviews of the app were not good. The majority of users stated it wasn’t tracking many of the locations they had visited.

“With the urgency of the onset of Covid, the app was fast tracked and was not as active as we would have liked,” commented Dosch. “However, we are now in version 3.0 and it is much more accurate. Users can add a location if the app misses it.”

The Care19 Collection, which consists of the current Care19 GPS app and the Care19 Exposure Bluetooth app, is expected to be available in both iOS Apple and Android Google app stores very soon.

“By offering two separate apps, we are giving our citizens every technical option they could need,” stated Dosch.

Experts caution that contact-tracing apps are not a “Silver Bullet” for stopping the spread of COVID-19.

Although GPS and Bluetooth technology are crucial to the success of contact-tracing apps, human factors are also important. Whether using Care19 or the Google-Apple exposure app, much of the reliability of the technology rests on the integrity of the information users input.

Jennifer Nuzzo, epidemiologist at Johns Hopkins Bloomberg School of Public Health, said it is not clear if these apps will assist contact tracers. For the apps to be effective, it is up to the individual and their willingness to “divulge information to a public health official,” said Nuzzo.

According to a 2017 Pew Research Poll, only 42% of Americans above the age of 65 own a smartphone. That’s significant, because people in that age group reportedly account for 8 out of 10 deaths from COVID-19.

“This technology is new and untested,” stated Deborah Brown, senior digital rights researcher at Human Rights Watch. “There is a likelihood that Bluetooth-based proximity tracing can lead to both false positives and false negatives.”

False negatives, Brown explained, “occur when an app will fail to flag individuals as potentially at risk even when they’ve had high risk contact with someone with the virus. False negatives might give people a false sense of security about their exposure risk, lead to them spreading the virus, or delay seeking treatment.”

False positives — incorrectly notifying users they have been exposed — lead to users mistrusting the app, Brown pointed out.

Jason Bay, one of the leading developers of contact-tracing app TraceTogether, stated: “If you ask me whether any Bluetooth contact-tracing system deployed or under development anywhere in the world is ready to replace manual contact tracing, I will say, without hesitation, that the answer is, ‘No.’

“There are lives at stake,” Bay continued. “We use TraceTogether to supplement contact tracing — not replace it.”