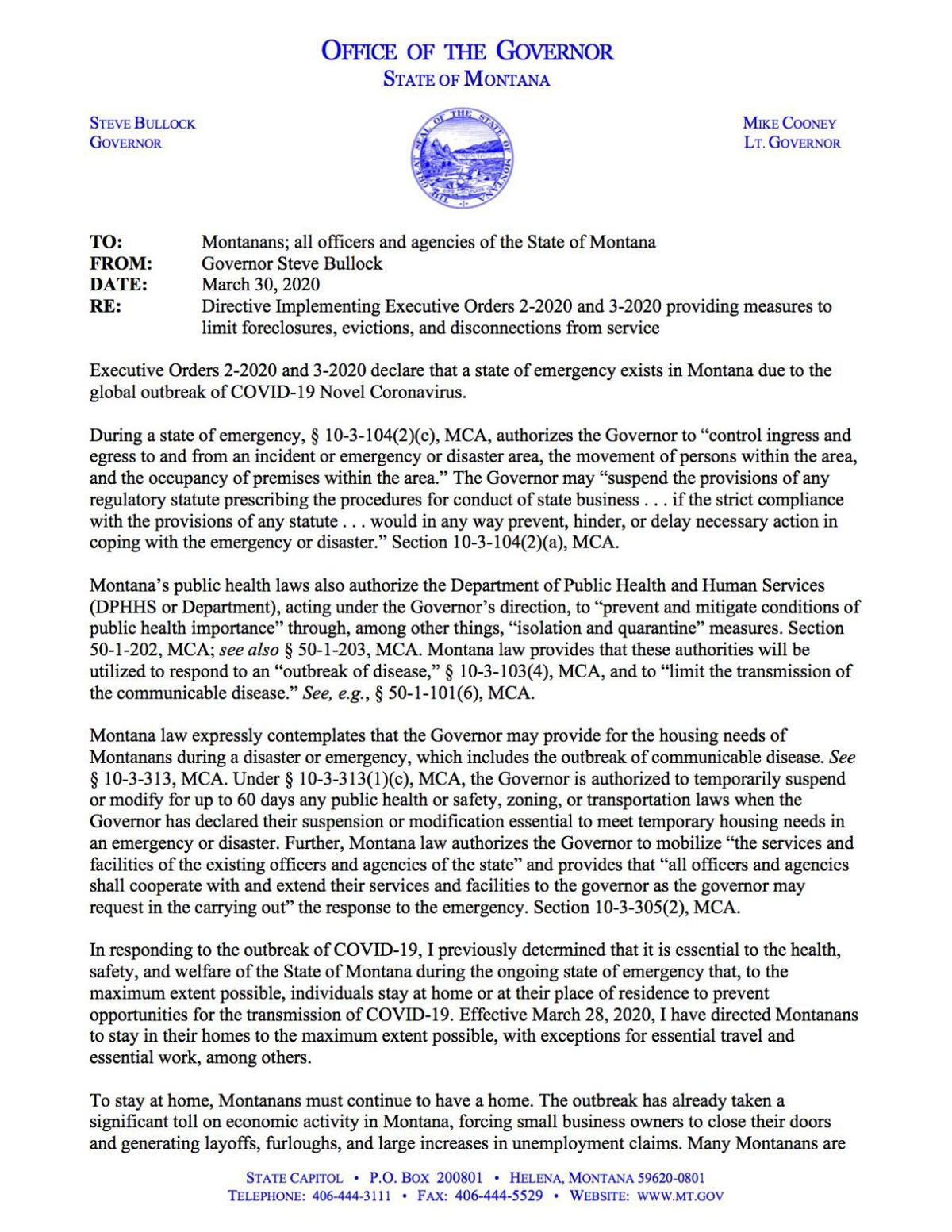 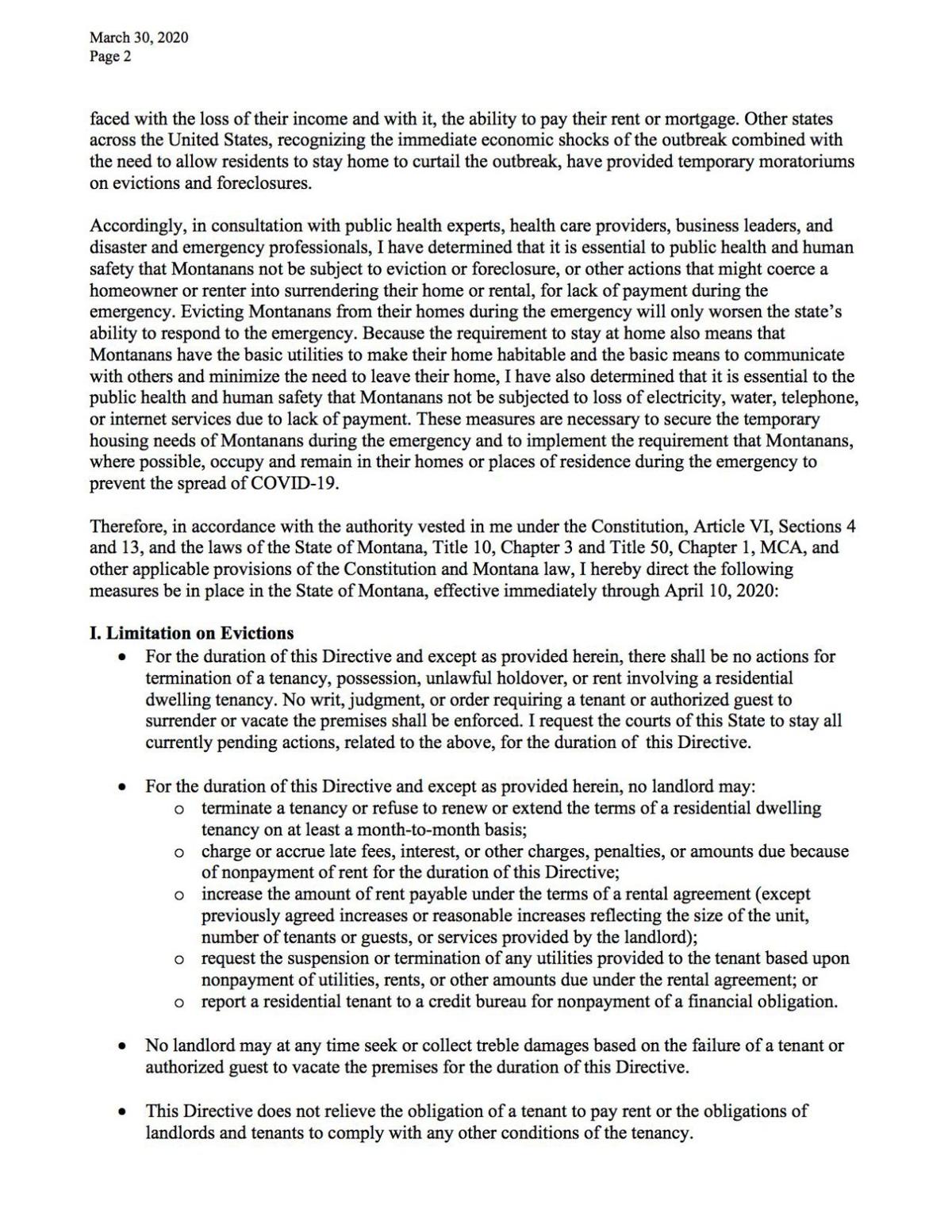 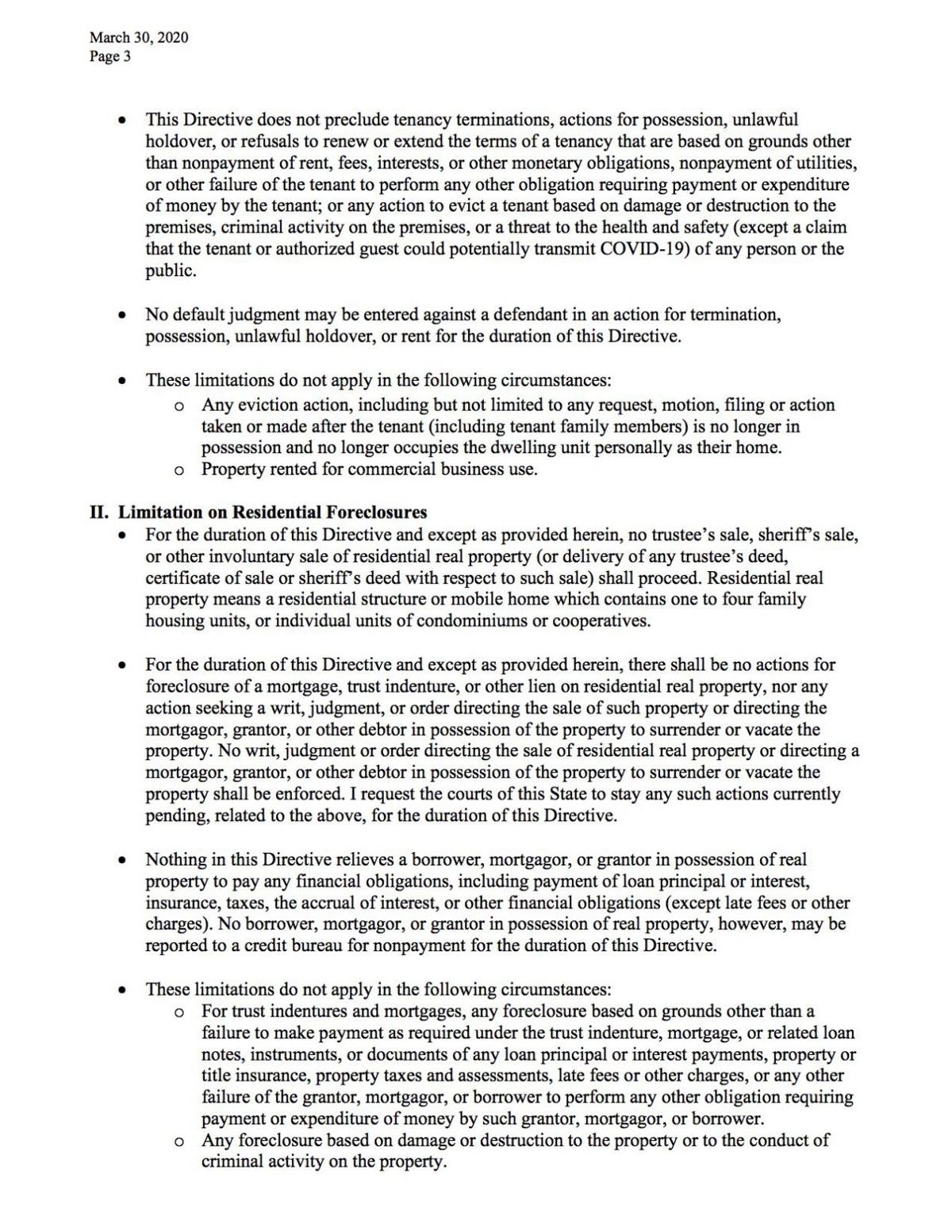 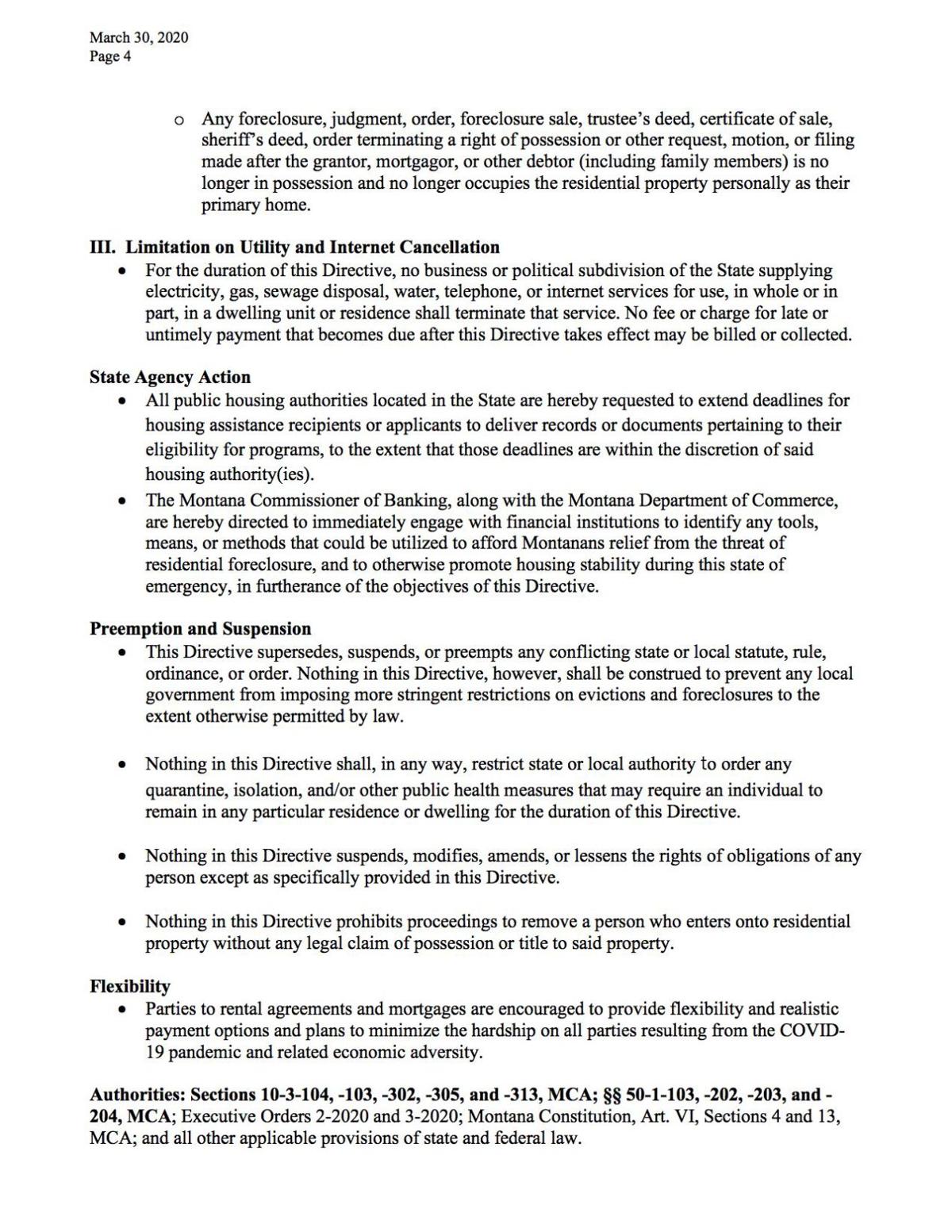 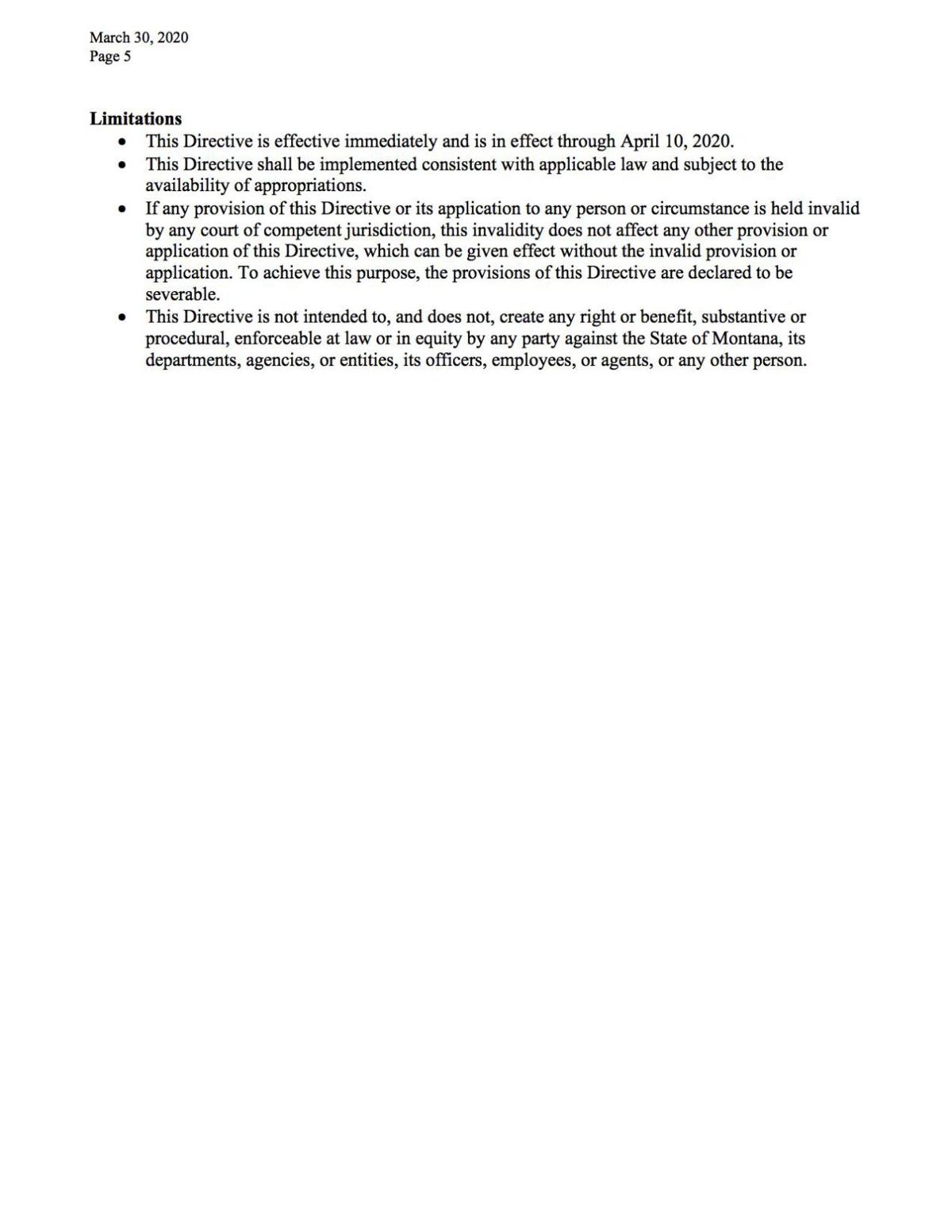 We have lifted the paywall on this story. To support essential reporting, please consider becoming a subscriber.
1 of 5

Montana Gov. Steve Bullock announced a directive prohibiting landlords from evicting tenants who are unable to pay their rents because of economic hardships due to the COVID-19 crisis.

Gov. Bullock held a press conference to address a host of issues related to the COVID-19 epidemic, including the somber announcement that a fifth Montanan has died because of complications directly related to the coronavirus.

“Our community felt a ripple effect of heartbreak,” the governor said, referring to weekend news that four residents of Montana were confirmed to have died because of COVID-19.

As if to find a silver lining in the dark story that has become the coronavirus, Gov. Bullock added some good news.

“Of these cases that have tested positive for COVID-19,” he said, “32 have been released from isolation and have recovered.”

The governor’s directive provides detailed specifics about the decision to prevent landlords from evicting tenants who face financial hardships directly because of the coronavirus.

“Landlords are prohibited from terminating a lease or refusing to renew or extend the terms of a current lease agreement, at least on a month-to-month basis,” the directive states. “It also prohibits late fees or other penalties due to late or nonpayment of rent, prohibits rent increases except for those previously agreed upon, and prohibits landlords from seeking damages in court due to nonpayment of rent.”

The governor’s directive also prevents involuntary sales of homes, foreclosures, liens placed on residential properties or “late fees charged due to inability to pay mortgage payments on time” for the duration of the directive, in effect at least until April 10, 2020.

A media representative asked whether apartment landlords will receive financial compensation from the state if tenants are unable to pay their rents.

Gov. Bullock reiterated that “tenants and homeowners should meet their obligations on time.”

However, he said no financial resources are being made available under the directive to compensate landlords for lost rents due to the coronavirus.

Today’s actions do not relieve tenants “from paying rent or borrowers from paying mortgages or other financial obligations related to homeownership,” the governor’s directive states.

Additionally, the directive “prohibits suspension of utilities during the emergency, including electricity, gas, sewage disposal, water, telephone, or internet services, and prohibits late fees for bills due during the ‘Directive.’”

“Montanans need to know that we’ve got their backs,” the governor told the media.

A reporter asked the governor if he has any plans to close schools for the remainder of the current school year.

Gov. Bullock responded he will continue to assess the situation with school shutdowns and business closures on a twice-monthly basis.

The governor said he hopes to see schools open again soon; however, he applauded school administrators and teachers for their efforts in providing online learning to K–12 students who attend Montana’s public schools.

Bullock thanked internet providers for taking steps to ensure families with kids have continuous computer interconnectivity so school-age children can receive lessons through the internet and study at home during the COVID-19 crisis, at least while schools remain closed.

“Schools will continue receiving funding during this time,” Gov. Bullock said, noting he will waive requirements for schools to document student time in classrooms.

The governor said he will “issue a closure mandate every two weeks” for schools if necessary. However, he added his goal is to reopen the state’s schools, as well as non-essential businesses “like bars and restaurants,” as soon as possible.

Representatives from more than 400 public school districts in Montana have submitted plans to show they’re providing learning activities, mandated school meals and extended care for special-needs students during the closures, the governor reported.

“I’m going to continue to look at what we would have to do to open the schools up before the end of the school year,” Bullock told the media.

During the press conference Gov. Bullock discussed the shortage of test kits and swabs made available from the federal government to Montana.

“I don’t want a day to go by without being able to perform tests,” he said, explaining it has been challenging to persuade the federal government to allow states such as Montana to purchase test kits through non-federally sanctioned private companies.

“No matter a rural or an urban state, all governors face certain challenges with regard to testing,” Gov. Bullock said, addressing the shortage of federally approved test kits. “We either have to get [kits] from the federal government or from the private sector.”

Not testing people who think they may have the coronavirus is not an option, he said, adding that Montana is expecting to receive 1,500 additional test kits from the federal government on March 31.

“We’ve made some progress with the CDC from today to last Thursday,” he said, referring to the increase in the number of test kits Montana expects to receive this week.

Gov. Bullock thanked the state’s truck drivers for continuing to deliver needed supplies, as well as teachers who offer distance-learning to students. He also applauded healthcare workers — from doctors and nurses to janitors.

“For weeks, both rural and urban hospitals have served on the front lines to protect” the citizens of Montana, the governor said.