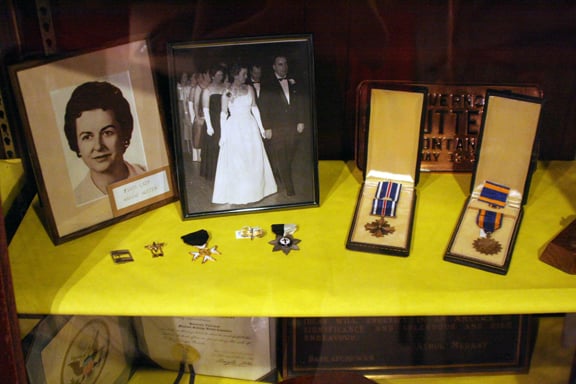 Nutter's Distinguished Flying Cross and Air Medal from WWII are on display at the MonDak Heritage Center. 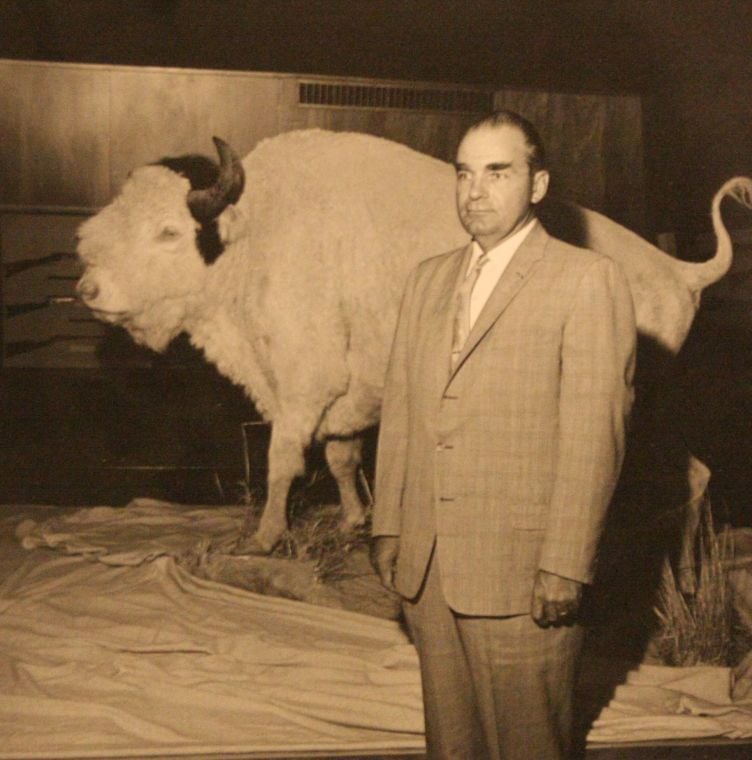 Nutter's Distinguished Flying Cross and Air Medal from WWII are on display at the MonDak Heritage Center.

A statue of former Montana Gov. Don Nutter in Veterans Memorial Park in Sidney has him standing confidently while holding a cigar in his hand.

Beneath the statue is a plaque briefly listing his accomplishments. He lived from 1915 to 1962, served as governor from 1960-1962, and was a World War II pilot, state senator, undersheriff, attorney, local businessman and referee.

“May God give you and I strength, courage and intelligence to do those things good for Montana,” Gov. Nutter said.

Nutter was serving his term as Montana’s governor when he died tragically in a plane crash during a blizzard. Born in Lambert and raised in Sidney, Nutter was a small town man and an underdog in his election.

Families around Sidney still remember him.

His wife, Maxine, and him were close friends with Dan and Dorothy Price of Sidney. The Prices had four children: Craig, Kathleen, Patti and Bill. Maxine Nutter and Dorothy Price were particular close; Bill Price recalled “they were inseparable.”

Siblings Craig Price and Patti Boyer still live in the area and have many fond memories of the former governor and his family.

“He had a presence. He just did. And he had a real booming voice, and a great laugh,” Boyer said. “That presence was not a fearful thing. It was kind of mesmerizing in a way, and it never changed as I became a young teenager. Maxine was a very classy compliment to his demeanor.”

Craig Price added, “How does anybody get elected out of Sidney, Montana to be a governor? ’Cause the west carries so much clout. He, in my mind, as he worked in the legislature, then wanted to run for governor, he just had that presence about him. I believe both parties here supported Don in a big way because of what he stood for, where he was from. So it didn’t make any difference whether your party affiliation was one or the other, they went to work for him.”

Craig’s first vivid memory of Gov. Nutter was watching him referee. Nutter refereed high school basketball and football games. In 1949, 8-year-old Craig tagged along with Nutter when he went to referee a basketball game in Wolf Point.

“Wolf Point was a real renown town for basketball teams and players,” Craig said. “During the game, there was one fan in the stands heckling the referees real bad. And all of a sudden, in the middle of that game, in the middle of a play, Don blows his whistle…stops the game, marches right up into the stands, puts his finger on this gentleman’s nose, so to speak, and said, ‘One more word out of you and you’re outta here.’ A lot of officials want to do that, but he actually did it and I saw it. It stood out in my mind for so long all these years, of the command that he had for that game.”

Patti, Craig and their brother Bill all remembered how Nutter loved black Labrador dogs and hunting ducks and pheasants.

“That tradition was passed along to his son, John,” Craig said.

Bill Price, who currently lives in Seattle, Wash., was the godchild of Don and Maxine Nutter and good friends with John Nutter, who passed away in the late 1990s.

“When I was little, he just was this huge man with big hands and love to hunt,” Bill remembered.

“I was in class, got out of class. They said the governor just got killed, and of course, they didn’t know that I would know the governor personally like that,” Craig said. “Just barely into his first term, and he had such hope, such plans for the state to try new things and didn’t get a chance to really implement them.”

Patti was a 16-year-old sophomore in Sidney High School when the tragedy happened.

“The thing I remember is hesitating, and just like, that’s Don. It’s funny because I didn’t think of him like a governor, it was more, he was Don Nutter. He was part of our community, part of our family,” Patti said. “I think that the entire community — it wasn’t just the school — in the next few days, it was so unbelievable because we had such great hope. It was quite devastating for every age level.”

For anyone interested in learning more about Don Nutter, there is an exhibit on him at the MonDak Heritage Center.

“May God give you and I strength, courage and intelligence to do those things good for Montana,”