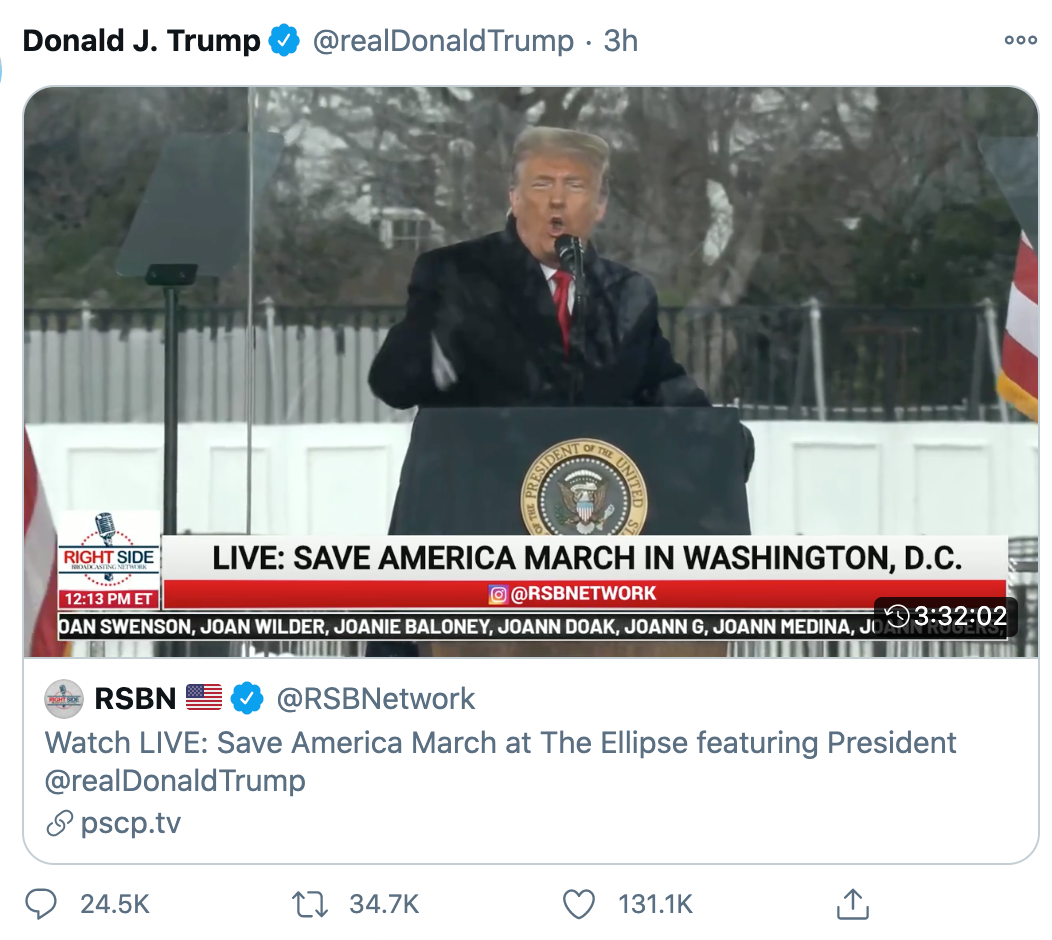 Trump presided over a rally just prior to the Capitol break-in, in which he rehashed claims of election fraud and urged supporters to fight for him. In the same event, he also cast any media outlets that report anything other than his claims as enemies of the people. Judges in the 60-some cases, some of them Trump appointees, have looked at Trump's claims and dismissed the allegations, citing lack of evidence that any fraud took place. 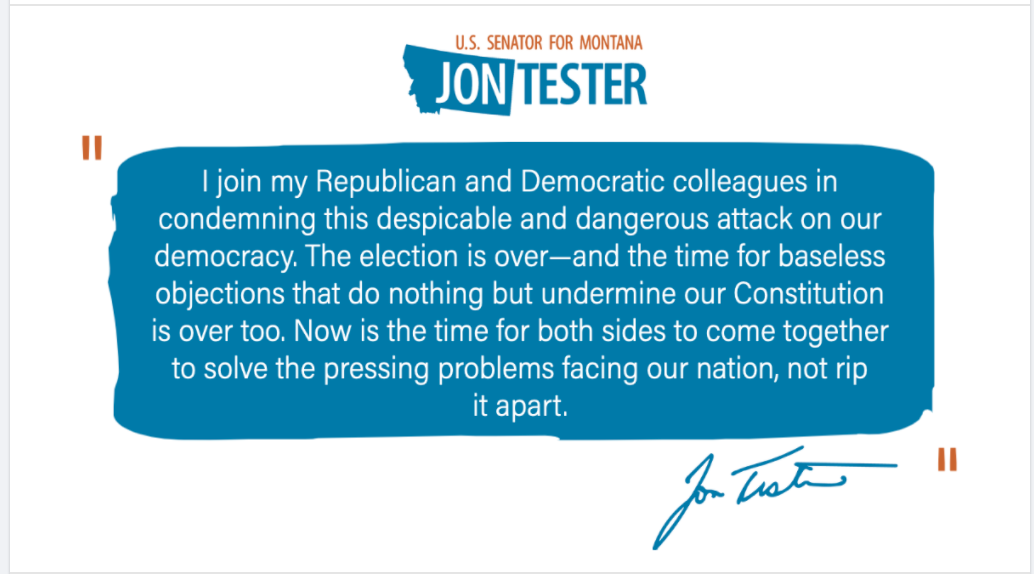 Trump presided over a rally just prior to the Capitol break-in, in which he rehashed claims of election fraud and urged supporters to fight for him. In the same event, he also cast any media outlets that report anything other than his claims as enemies of the people. Judges in the 60-some cases, some of them Trump appointees, have looked at Trump's claims and dismissed the allegations, citing lack of evidence that any fraud took place.

Congress ultimately returned to session and finalized its deliberations in a marathon session that went until nearly 3 a.m. CST. These deliberations affirmed the election of Joe Biden as president and Kamala Harris as Vice President.

“Today is a sad day for our country,” Daines said. “The destruction and violence we saw at our Capitol today is an assault on our democracy, our Constitution and the rule of law, and must not be tolerated. As Americans, we believe in the right to peaceful protest. We must rise above the violence. We must stand together. We will not let today’s violence deter Congress from certifying the election. We must restore confidence in our electoral process. We must, and we will, have a peaceful and orderly transition of power.”

Daines’s office further clarified that the Senator’s decision to object to Arizona’s electoral votes was never an attempt to overturn the election, but was meant to raise concerns on behalf of those Americans who lack confidence in the election process, and to drive reforms that would restore that confidence and trust in the process. That effort will continue, his staff said.

Daines is not the only legislator who decided to change course Wednesday night. Georgia Republican Sen. Kelly Loeffler also reversed course when it was her turn at the podium once Congress reconvened.

“I fully intended to vote to reject electoral votes,” she testified. “But I cannot now object to the certification of these electors.”

Loeffler said that while the violence and lawlessness changed her vote, she still believes that Congress must turn its focus to protecting the integrity of American elections and restoring American faith.

“America is divided,” she said. “But still the greatest country on earth. Upholding Democracy is the only path forward to preserving our Republic.”

Others, meanwhile, said they would go forward with objections despite the situation, including Montana U.S. Representative Matt Rosendale.

“Today is an absolutely terrible day. I have always condemned and will continue to condemn political violence in all forms. It has no place in our country.

“However, I will not be intimidated by mob violence from the left or the right. I will oppose certification of electors from certain disputed states,” he said. “These votes today were always about preserving and protecting the integrity of our election process, not any candidate. I will continue to work to ensure our elections are free and secure and every legal vote is counted and every fraudulent vote is rejected.”

The chaos at the Capitol began late Wednesday afternoon of Jan. 6. A mob of people carrying Trump flags and wearing Make America Great Again hats pushed their way past security guards, after a pro-Trump rally. Lawmakers were forced to halt debate and take shelter instead, while people outside the building were told to take cover.

A woman was shot during the conflict and subsequently died. Three others died of separate medical emergencies. A dozen or so police officers were also wounded, and one has since died.

Montana’s legislators, meanwhile, all posted brief statements on social media immediately after the riot, condemning the violence and saying that they were OK.

In the rally preceding the riot, President Donald Trump re-hashed allegations of election fraud and urged his supporters to keep fighting for him, even suggesting at one point that they walk down to the Capitol. Trump also characterized any media outlets not reporting that his allegations are true as “enemies of the people” during the speech and said he would never concede the election.

“You don’t concede when there is theft involved,” he said. “Our country has had enough. We will not take it any more, and that is what this is all about.”

Judges presiding over the 60-some cases Trump filed to challenge election results in Arizona, Georgia, Pennsylvania, Nevada, and Wisconsin — some of them Trump appointees — have looked at the claims the president has made and dismissed the allegations, citing lack of evidence that any actual fraud took place.

After the rioting began, at 4:17 p.m., Trump released a 1-minute video urging supporters to remain peaceful and go home — but it also still pressed claims of election fraud.

“I know your pain, I know you are hurt,” Trump said in the video. “We had an election that was stolen from us. It was a landslide election and everyone knows it, especially the other side. But you have to go home now. We have to have peace. We have to have law and order, we have to respect our great people in law and order. We don’t want anybody hurt. ….. So go home. We love you. You are very special.”

Here's what people had to say about the violence at the Capitol as lawmakers met in session to take up electoral votes in the 2020 election.

"We are blessed in Montana to have a long tradition of respectful and spirited dialogue and peaceful expression of diverse viewpoints through our First Amendment rights. Violence is not an acceptable response to political differences. Already this week, we've had multiple peaceful demonstrations here at the State Capitol in Helena. We encourage Montanans to continue serving as an example for the nation during these times of intense division."

"I condemn any kind of violence and intimidation. This is unacceptable."

"I am safe and so is my staff. I condemn  political violence of any kind. There is a peaceful process to resolve this which is what we were attempting to do. Thank you to the Capitol Police for keeping us safe."

“We condemn the violence at the U.S. Capitol and encourage respect for the rule of law. We are grateful to the Capitol Police and law enforcement for their dedication as they work to restore order.”

“I’m safe and in a secure location. Violence is never okay, and what is happening is abhorrent. It must end and be condemned immediately.”

“Thank you to the Capitol police and all law enforcement.  Rioting is not protesting. This needs to stop. Now.”