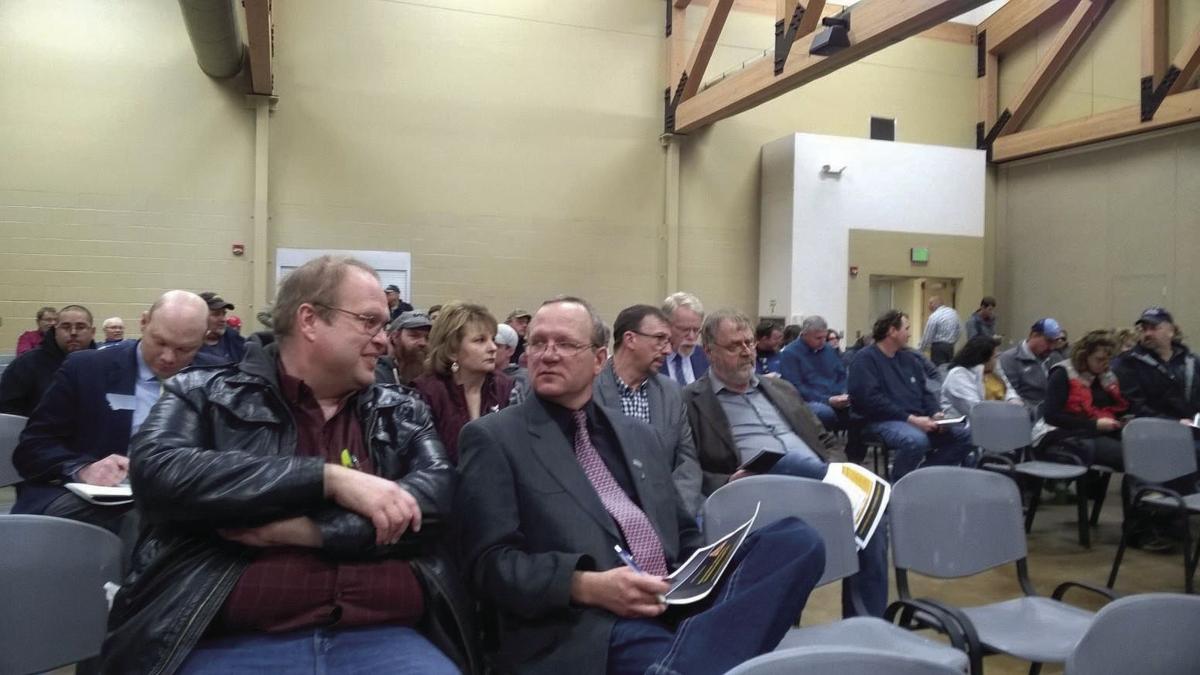 Richland County residents attended a meeting on Tuesday, Feb. 25, 2020, addressing the closing of the Lewis & Clark coal-generation plant in Sidney, including several state representatives, such as Joel Krautter of District 35. 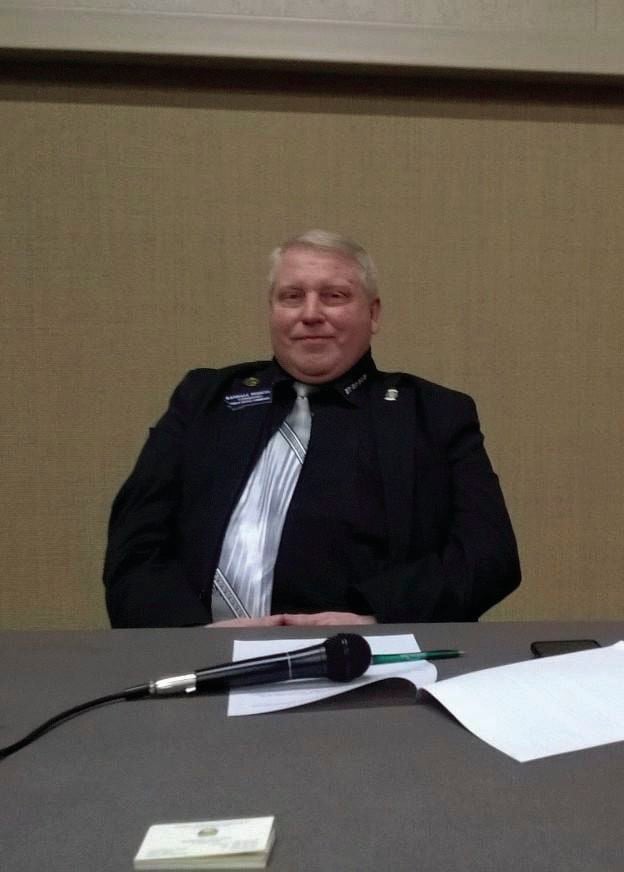 Montana Public Service Commissioner Randy Pinocci led the public meeting at the Richland County Fairgrounds Events Center on Tuesday, Feb. 25, 2020, vowing not to leave until everyone had a chance to speak. 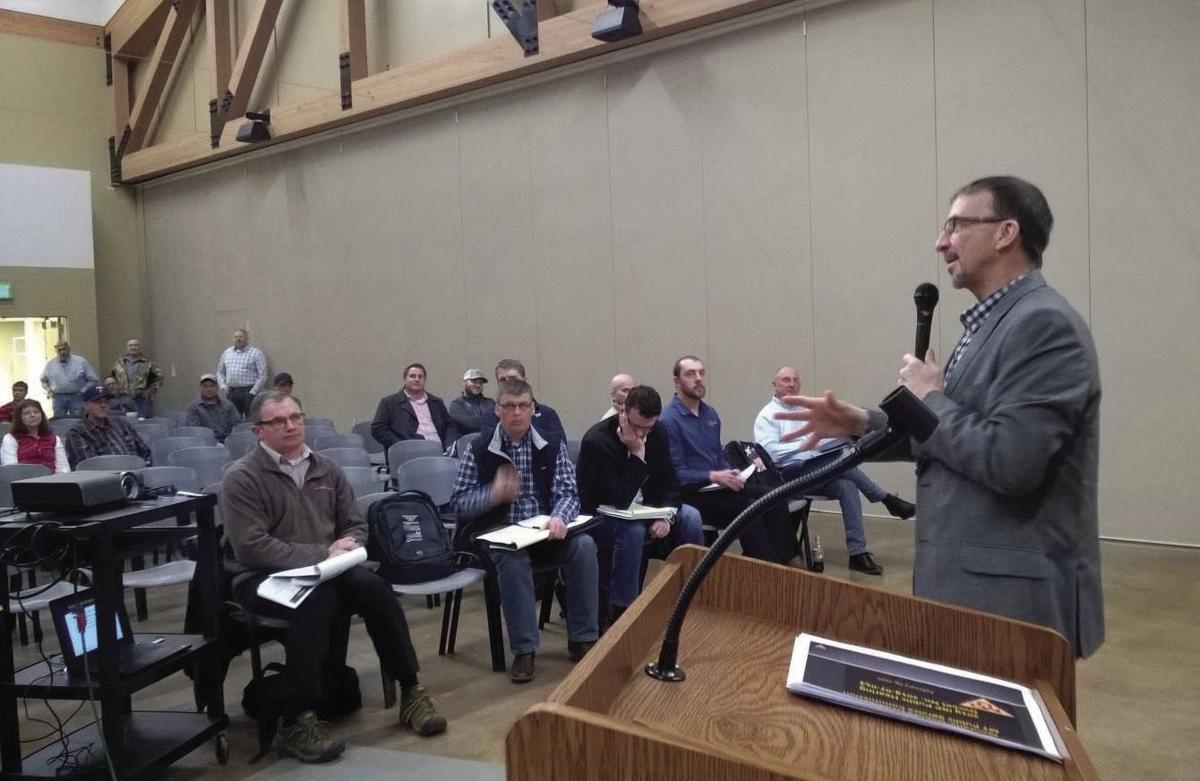 Richland County residents attended a meeting on Tuesday, Feb. 25, 2020, addressing the closing of the Lewis & Clark coal-generation plant in Sidney, including several state representatives, such as Joel Krautter of District 35.

Montana Public Service Commissioner Randy Pinocci led the public meeting at the Richland County Fairgrounds Events Center on Tuesday, Feb. 25, 2020, vowing not to leave until everyone had a chance to speak.

Nearly 100 Richland County residents attended a meeting on Tuesday, Feb. 25, 2020, addressing the closing of the Lewis & Clark coal-generated plant in Sidney. They were joined by several state representatives, who voiced their concerns about the impact of a recent decision to shut down the facility.

State Rep. Joel Krautter (Dist. 35) made clear before the meeting started where he stands.

“I want the plant to stay open,” Krautter said. “Everything is so tied together within our community. With the Savage coal mine and Sidney Sugars, I’m worried about a domino effect. The impact on taxes for Savage schools, if that mine closes, would definitely have a negative impact.”

The words “domino effect” were repeated throughout the meeting, hosted by Richland Economic Development Corp. at the county fairgrounds’ Event Center.

Led by Montana Public Service Commissioner Randy Pinocci (Dist. 1), the meeting initially seemed futile. The Montana Dakota Utilities (MDU) a year ago announced its intention to close the Lewis & Clark coal plant, along with a pair of additional coal-fired “units” in North Dakota known as Hesket stations 1 and 2.

However, Pinocci encouraged audience participation, advising everyone that the pathway to preventing the closure of the Sidney plant is to lobby their local representatives to change state laws. Presumably, changing Montana laws regulating utilities could force MDU to reverse its decision, or sell the facility to a party that would be required to maintain a coal-generating utility facility in the region.

Pinocci pointed out three state representatives were in the audience, including Krautter. He said they could propose legislation that might forestall or prevent the closure of Sidney’s coal-generated plant.

After encouraging citizens of Richland County to “be vocal about their positions on closing the plant,” Pinocci said, “I won’t leave here until you’re all satisfied.”

Throughout the night, the meeting was referred to as a “listening session.” In fact, Pinocci made clear MDU representatives were there to explain the company’s decision to close the three plants, but not to answer any questions.

Mike Green, an attorney with a Helena law firm, gave opening remarks. He said the goal of the Planning Commission’s analysis, which was partly presented at the meeting in the form of slide presentations, was “to provide low-cost power to Montana and Dakota residents.”

Nearly half a dozen executives from MDU attended the meeting and gave presentations, which were brief but succinct.

The first MDU representative, Darcy Neigum, said the initial planned “retirement date” for the Lewis & Clark station was 2024. That date was moved, he explained, after MDU determined the company needed to recover its costs from using coal compared to liquid fuel, which he said is considerably less expensive.

Neigum, a systems operations and planning manager at MDU, said the date for closing the Lewis & Clark station was moved up to the end of 2020 after the company determined it “needed to recover costs for using coal plants.”

Throughout their presentations, MDU representatives referred to “modeling results” that showed it is no longer cost-effective to use coal to operate utility power plants in the region.

Travis Jacobson of MDU showed a slide estimating the annual cost of operating the Lewis & Clark station to be nearly $14-million. Jacobson estimated the cost savings of closing the Sidney utility plant to be $11-million.

Jay Skabo, a vice president with MDU, informed the audience the company has decided to extend the date for closing the Lewis & Clark station.

“We are planning to retire these three units,” Skabo said. “To make the decommissioning more feasible, they have decided to extend the date from December 2020 to March 2021.”

Although people in the audience who spoke seemed to draw some encouragement from the three-month delay in closing the plant, Skabo made clear that MDU intends to move forward with its decision.

“We look toward decommissioning and demolition right away,” he said, noting there was no response from the marketplace in purchasing the Sidney coal-fired utility plant.

“We got no takers,” Skabo said, adding that MDU is cognizant of the impact that closing the local utility facility will have on one of the most prolific employers in the county.

“We are working with Sidney Sugars to make sure the water-supply line they operate with us is still operational through transition,” Skabo said.

MDU company reps at the meeting estimated 28 employees at the Lewis & Clark station will be laid off. However, Skabo announced four employees will be retained, along with a single supervisor, through the transition period.

“We’re providing retraining,” he said, implying relocation possibilities. “Hopefully we can retain all of these employees throughout the MDU family.”

After each of the MDU representatives made presentations, Pinocci invited members of the public to speak.

“I’m not trying to play on your heart strings,” Potter said, standing directly in front of the MDU executives, all seated in the front row.

“I’m just trying to state the facts,” Potter continued, pointing out the school district stands to lose more than $100,000 in lost tax revenues as a result of MDU’s decision to close the Lewis & Clark station, which relies on coal mined in Savage.

“In July we were told we would face closures in 2020,” she said. “Right now Savage faces some concerns. We need that $125,000 revenue from the coal plant.

“It makes me feel like we’re having forced consolidation, which we have no control over,” Potter continued. “We’re only a small school. We have about 116 children there. If we take away an economically productive environment, it hurts kids. We’re trying to run a school. We’re trying to create that future for them right here in Richland County and Savage.”

She pointed out that closing down the plant, where many of their parents work, impacts the entire community, which relies on tax revenues.

“You can’t buy what we have in Savage,” Potter said, noting she spent a portion of her career in a large metropolis on the East Coast, where people yearn to live in a small-town community like those in eastern Montana.

Although Potter reiterated she was not at the meeting to try and change MDU’s decision about closing the local coal-generated plant, she implored the managers to consider giving the community more time to prepare for the harsh economic consequences.

“What I want is a true statement of when” MDU plans to close the plant, Potter said. “We are shifting our tax burden. I am working with our [school district] attorney. I need to have some answers to plan the budget. I’m just asking you for time.”

One by one, residents of Savage appeared at the podium and pleaded with representatives of MDU, sitting patiently in the front row.

“Think about what you’re doing to this community,” said one Savage resident, calling MDU’s presentation a “false narrative.”

Bruce Reed, a Savage resident and employee at the town’s coal mine, was brief but to the point.

“My question to you, here in the newspaper they requested another rate increase,” Reed said. “This was supposed to be cheaper.”

Rep. Krautter, who spoke during the meeting, pointed out one of the slide presentations made reference to an action plan based on a “potential” carbon tax as one justification for closing Sidney’s coal-generated power plant. Krautter noted that Montana has no carbon tax, and isn’t likely to impose one in the near future. In fact, he said almost no states currently have carbon taxes.

“It seems to me that states like Minnesota, that want to be carbon-free, are influencing policy, economically, of Montana, which has no carbon tax,” Krautter said.

By the end of the evening, it seemed clear the perceived “war on coal” is a primary reason for MDU’s decision to close the three coal-generated power plants, including Sidney’s Lewis & Clark station

As Krautter pointed out, however, there is no war on coal in Montana.

Others who came forward to speak pointed out that if future gasoline prices rise, it’s likely coal will make a comeback. With no coal-generated power plant in eastern Montana, and plans to demolish the Lewis & Clark station after it is closed, some people raised concerns about the future of Richland County.

Following the advice of Public Service Commissioner Pinocci at the beginning of the meeting, Tom Halvorson encouraged county residents to take legal action to stop the closing of the the Lewis & Clark station.

“Nothing is going to change unless people in Richland County file investigations to review rate increases and intervene to flush out the facts that we are not getting,” said Halvorson, a big man with a genteel voice, dressed in a traditional blue suit, with a neatly knotted tie.

A more outspoken participant appeared before the MDU reps. Decreasing access to power in Richland County sends a message outside the community that eastern Montana is on the decline, said Rick Norby, Sidney’s mayor.

“Not having enough power is going to be a big deal,” he said.

“Please allow us to make a decision to sell the plant to another buyer,” he said. “Listen to what we have to say.”