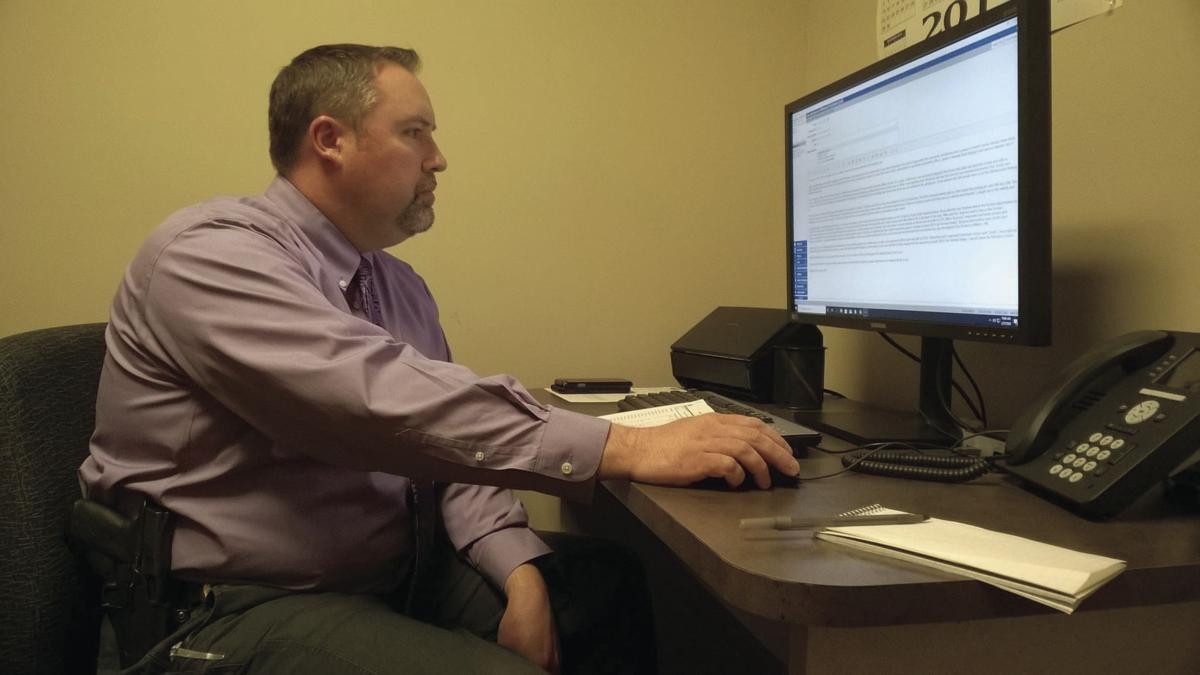 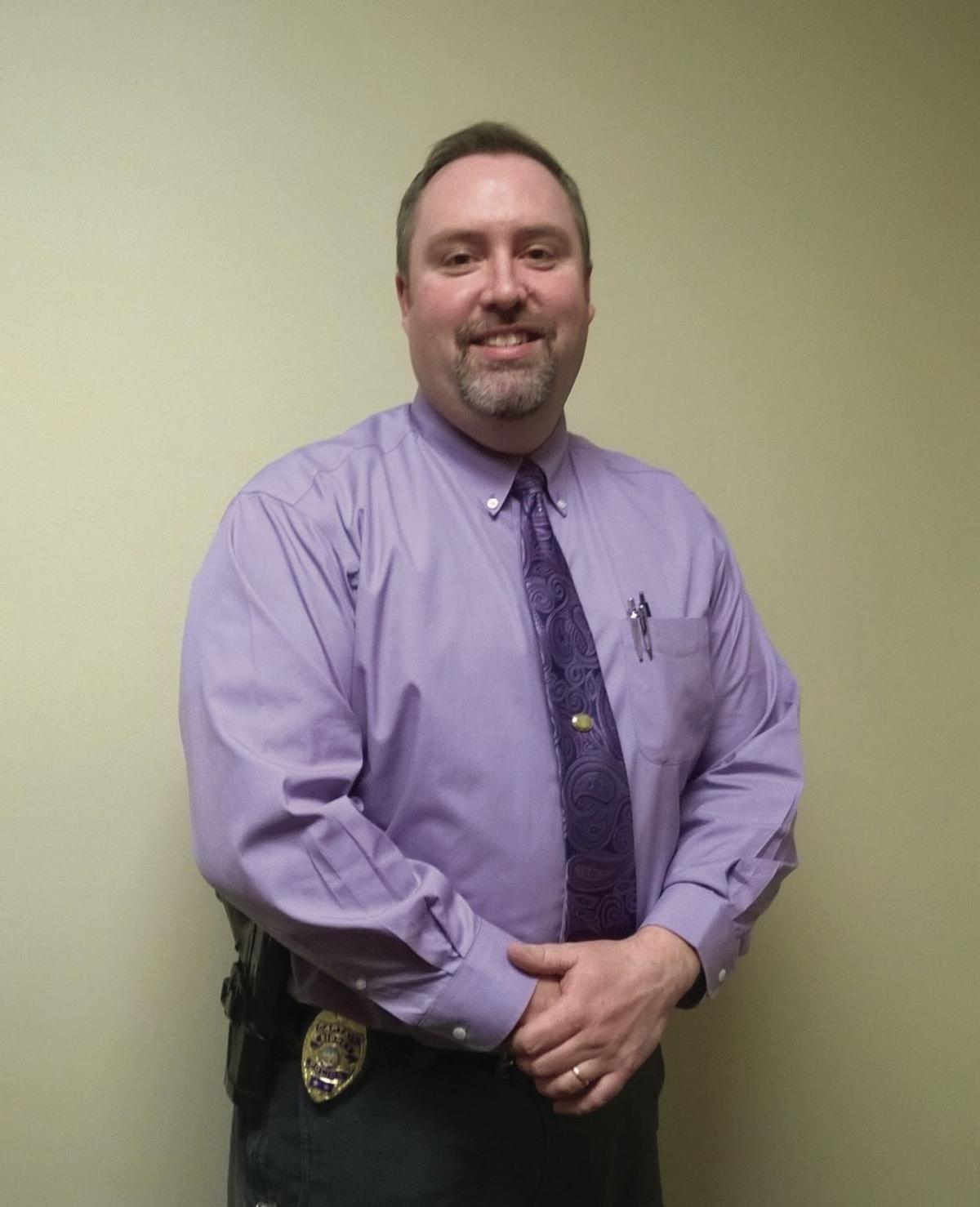 Mark E. Kraft, the newly appointed Sidney Chief of Police, did not envision a role in law enforcement prior to college.

After graduating from Montana State University with a Bachelor of Science degree in biology, Kraft wanted to become a veterinarian. Instead, he became a police officer.

“I hadn’t intended on getting into law enforcement,” said Kraft, explaining that student debts and the demands of a young family necessitated not pursuing a veterinary profession.

After college, he spent several years as an animal-control officer with the Billings Police Department, Kraft recalled from an office at the Richland County Law and Justice Center in Sidney.

In 2010, he joined the Sidney Police Department, rising to the position of assistant police chief. As Sidney Mayor Rick Norby stated, Kraft was essentially the equivalent of a “police captain.”

“He was by far the most qualified person of the five people we interviewed,” said Norby. “I believe he’s going to take us in the right direction.”

Asked why he thought Sidney’s mayor and city council have placed considerable confidence in him to fill the role left by retiring Chief of Police Frank DiFonzo, Kraft answered without hesitating.

“I had the experience and qualifications to fill this role,” he said. “I had a desire to step into this role and could best serve the department and community as police chief.”

It’s been a trying year for the city of Sidney and its police department. Several extraordinary crimes have brought a spotlight upon the city’s police department, including murders and armed robberies. These incidents are compounded, or perhaps caused, by a difficult local economy resulting from a decline in the so-called oil boom throughout the MonDak region.

“From the perspective of law enforcement, Sidney has really had to deal with some challenges from the pressures put on the community due to the oil boom and the high-profile crimes that have challenged the department and the community,” said Kraft. “I’m thinking of the Sherry Arnold homicide and the Nicole Waller case.”

Arnold was a local school teacher who was abducted while jogging, strangled and found dead. Waller, from Kalispell, is believed to have been abducted and is still considered missing.

In addition to these high-profile cases, which attracted international media attention, recent armed robberies and other violent crimes have prompted the community to scrutinize the Sidney Police Department.

Kraft said he’s up to the task of leading the city through difficult times. He credits the people of Sidney and Richland County with standing behind their local police.

“We’ve had all these challenges,” he said, “but the thing that impressed me is the community has always supported the police department in our efforts.”

He credits the city’s leadership with supporting the police department’s needs. The department currently consists of 13 sworn, full-time officers and one civilian employee who serves as administrative clerk. In addition to overseeing these employees, Kraft handles the department’s budget.

“We’re fully staffed, which certainly has not been the case over the years,” he said. “We have a fairly young police department, which is one of the things directing my goals. My primary goal is to continue to serve the community...with an emphasis on serve, integrity and accountability.”

“I want to emphasize ‘continue’ because that has been ongoing,” Kraft said, giving credit to retiring Chief of Police DiFonzo for steering the department in the right direction for nearly four decades.

“DiFonso has been very supportive of me stepping into this position,” he said, emphasizing the retiring chief’s tenure. “It’s unusual for a community not to have had to make this decision for 39 years.”

Kraft said he’s humbled and honored to succeed DiFonzo, noting the retiring police chief left big shoes to fill. He acknowledged the position comes with a sizeable pay raise, but Kraft said his primary motivation for pursuing and accepting the promotion is to serve the people of Sidney.

“Without sounding too braggadocious,” he said, “lots of people have been chiefs of police. I don’t consider myself to be a special individual, but I think I bring dedication to the people of this department and the members of this community. I bring professionalism. I have demonstrated leadership abilities and common-sense problem solving.”

Spending time with Kraft, reviewing routine cases ranging from drug arrests and domestic assaults to reckless driving and animal endangerment, it’s apparent Kraft has compassion for victims as well as offenders. He is quick to point out that everyone accused of a crime is innocent until proved guilty.

If it seems apparent that Kraft considers himself a spiritual man, he does.

“I attend Bible Baptist Church,” he acknowledged. “My relationship with Christ is important to me and my family. I think it really grounds me.”

Married for 16 years, with two daughters, 10 and 12 years old (“next month”), Kraft spoke reluctantly about the fact that his wife was diagnosed with breast cancer when she was 36. Three years ago, she went though full chemotherapy treatment and surgeries to remove the cancerous growth.

“Facing a challenge like that really changed my perspective as to what’s important as a family,” he said, emphasizing, “faith and family.”

He returns to the theme of service and the needs of everyone in the community, not just the people with power and money, but those with special needs as well.

It’s clear Kraft sees the role of Sidney’s police chief as serving — and protecting — everyone.

“The generic response you’re going to get is, ‘I want to serve.’ But in my case it’s true,” he said. “I want to help people. I like people.”

If that seems out of character for a cop, it’s useful to spend some time chatting with Kraft about his concerns for people down on their luck, people who resort to crime out of desperation, not because they’re inherently violent.

Make no mistake, Kraft wears a badge, and he holsters an automatic weapon. He seems to know where — and when — to draw the line, however.

That he’s aware there is a line between violent criminals and people who make bad decisions is reassuring.

“I want to help people in my community,” Sidney’s new police chief said, noting he expects to face new challenges in the position. “A police officer is always the person you want to call when you need help.

“I think it’s important to have someone with compassion and some common sense, steering the ship, so to speak,” Kraft continued. “I will rely on my experience, and faith, to guide me.”