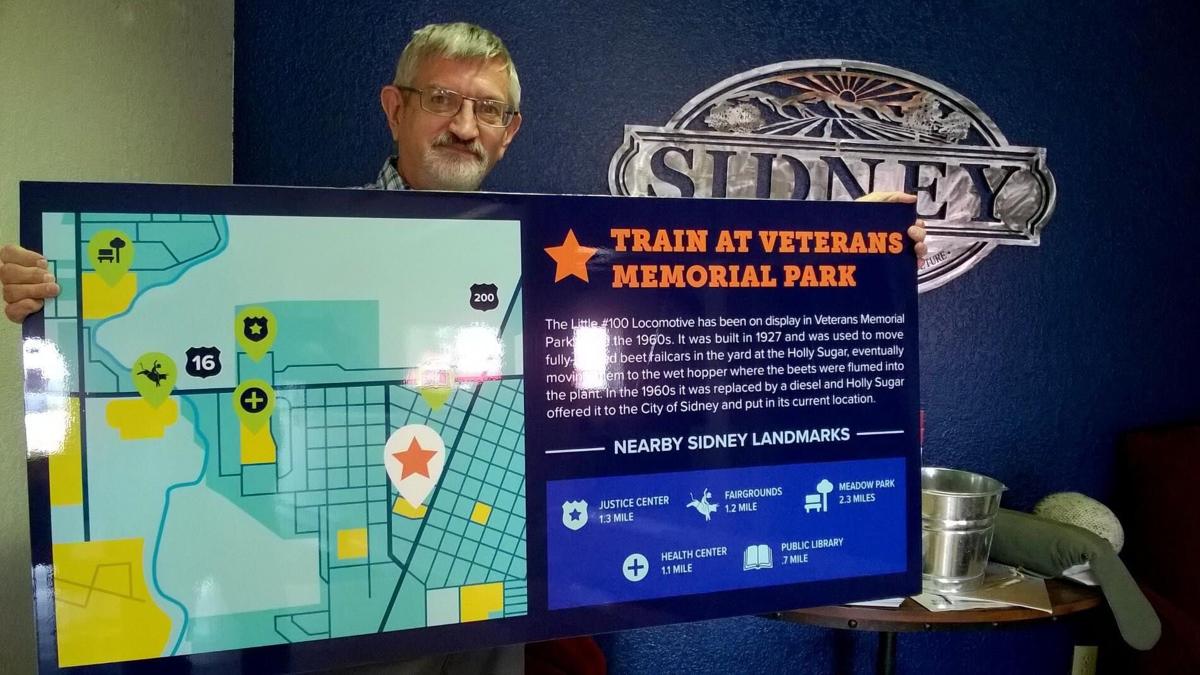 Bill Vander Weele, executive director of the Sidney Chamber of Commerce, holds a medium-sized sign, one of more than a dozen that will soon be posted around town to designate landmarks and help guide visitors. 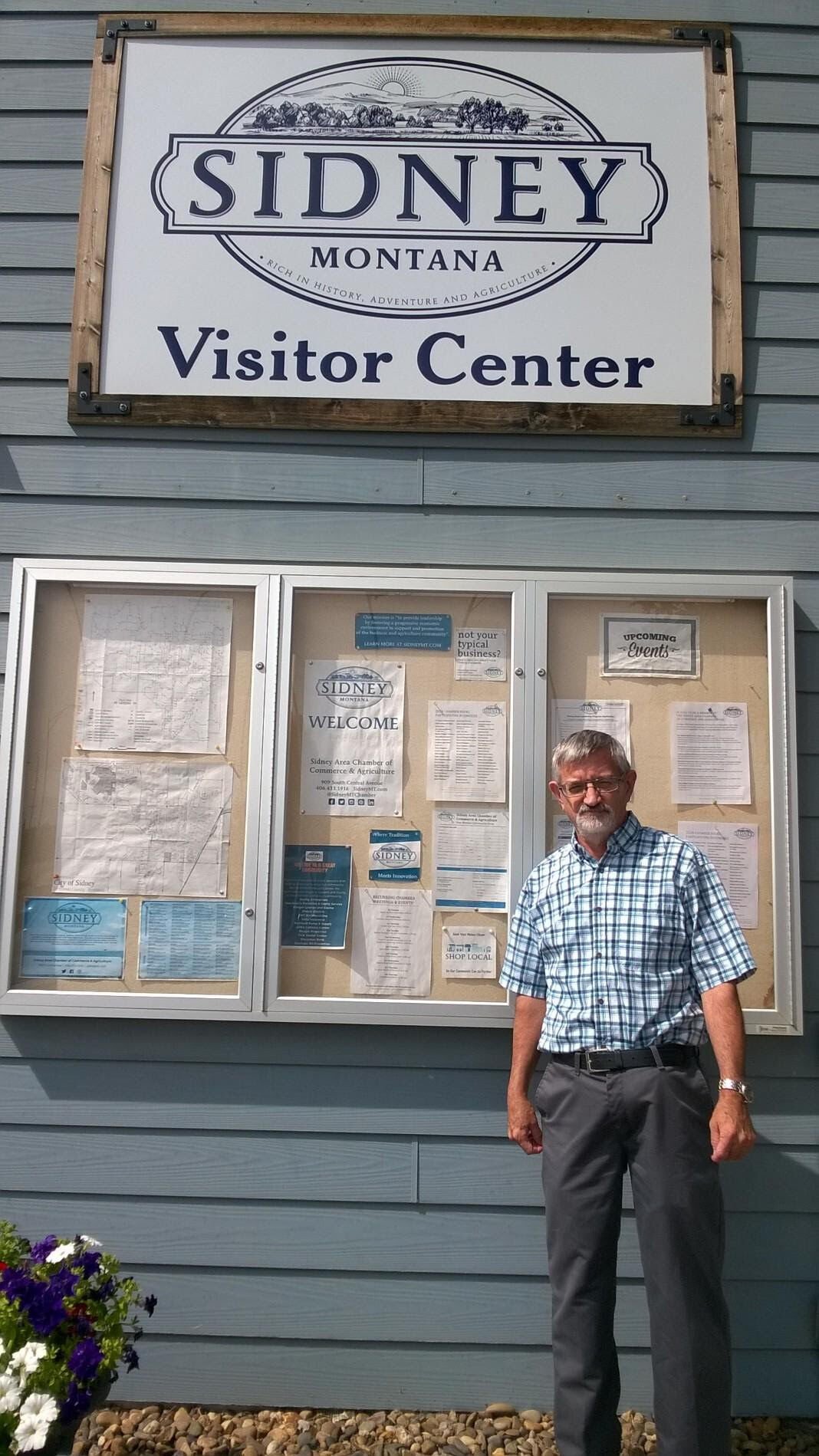 Sidney Chamber of Commerce Executive Director Bill Vander Weele stands outside the Sidney offices, where the chamber meets and serves its estimated 200-plus member businesses.

Bill Vander Weele, executive director of the Sidney Chamber of Commerce, holds a medium-sized sign, one of more than a dozen that will soon be posted around town to designate landmarks and help guide visitors.

Sidney Chamber of Commerce Executive Director Bill Vander Weele stands outside the Sidney offices, where the chamber meets and serves its estimated 200-plus member businesses.

The Sidney Chamber of Commerce has lost its eligibility as a Convention and Visitors Bureau (CVB).

Although this is a loss of prestige for local chambers, it is not expected to have a significant financial impact on operating finances, said Sidney Chamber of Commerce Executive Director Bill Vander Weele.

“Having a CVB was a great benefit for Sidney, but not being one is not going to have much of a financial impact on us,” Vander Weele told the Sidney Herald. “CVB funds helped us a lot to promote our events.”

The way CVB eligibility is determined is complicated. In a nutshell, it is based on annual gross lodging taxes, which must reach a specific threshold for a local chamber to qualify for CVB standing.

Sidney met that threshold for the first time in 2013, following one of the most robust financial booms in Richland County history, directly attributable to increased drilling for oil in the MonDak region.

Sidney qualified as a CVB in 2013 as a result of the oil and fracking boom. In 2013, Richland County gross lodging tax revenues generated for all four quarters totaled $422,417, a 28% increase over 2012, when area “bed tax” revenues increased 173% over the previous year.

By comparison, revenue for Richland County’s 2018 gross lodging tax — which is sent to the state and then returned to Montana counties after a complex calculation — fell to $132,978.

Vander Weele said the Sidney Chamber was put on notice about 18 months ago it could lose its CVB standing in 2020 if it was unable to increase revenues to an acceptable qualifying level. Although Richland County’s year-over-year gross lodging tax revenues for 2019 increased 13% — to $150,230 — it was not enough to qualify as a CVB in 2020.

For the Sidney Chamber, this means it now falls under the purview of a regional visitors bureau, as CVB standing goes. Missouri River Country will oversee distribution of the Sidney Chamber’s share of the local “bed tax” revenue. It will receive Richland County’s portion of the tax and distribute the money at its discretion.

For example, billboards and advertising in regional publications outside of Richland County would normally receive a portion of the CVB funds to help promote Sidney to visitors from other parts of Montana, or even tourists from other states.

“The main thing that changed is the bed tax money that usually goes to the state, and comes back to Sidney after it’s been divided, goes to the region Missouri River Country,” Vander Weele said. “We used it as a way to promote Sidney outside our area.”

Not About a Virus

Coming on the heels of the Bakken Brew Fest and Sunrise Festival cancellations — which the Sidney Chamber organizes — losing CVB eligibility is disappointing news for the chamber and its estimated 200-plus local business members.

However, Vander Weele pointed out they are two separate issues. Cancellation of chamber-held events was due to the COVID-19 pandemic and accompanying restrictions mandated (or recommended) by Gov. Steve Bullock. Fear of the coronavirus and the governor’s “Directives” resulted in low attendance at local events. This made holding events like the Sunrise Festival economically infeasible for the Sidney Chamber.

In other words, the chamber would lose money instead of making revenue on its annual festivals if it continued with them. After anticipating a steep drop in attendance, and even vendor participation, disheartening decisions were made to cancel many local events.

Loss of eligibility as a CVB is directly related to the slowdown in oil drilling throughout Richland County, which brought an influx of temporary workers into the area. They often stayed at hotels for short durations. However, a month at a hotel for a temporary worker is decidedly more profitable than empty rooms on weekdays during off-tourist seasons.

In short, the oil boom enabled Richland County hotels and motels to collect more “bed taxes.” That revenue was then funneled to the state, divided among counties and sent back to entities like the Sidney Chamber of Commerce to help promote the area to tourists from across Montana and throughout the western United States.

“The advantage of being a CVB is you receive funds directly from the state that you can use to promote your community,” Vander Weele said. “The good news is we knew this was going to happen, so we used the money we had wisely.”

He pointed out that most of the money the Sidney Chamber receives each year comes directly from member dues — meaning local businesses, including hotels and motels.

“It’s a slight financial hit, but the chamber is sound financially thanks to our memberships,” he said, estimating the Sidney Chamber of Commerce received more than $90,000 in dues from members in the past year.

“Our businesses have been very good about supporting us through the years,” the chamber’s executive director said.

Vander Weele added there will be no staff reductions as a result of losing CVB eligibility.

Although not as significant as the money it was receiving through its share of lodging revenues, both grants have been helpful, Vander Weele said.

“The chamber has to go back to the way it was before 2013,” he said. “It worked well then, and will continue to work well.”