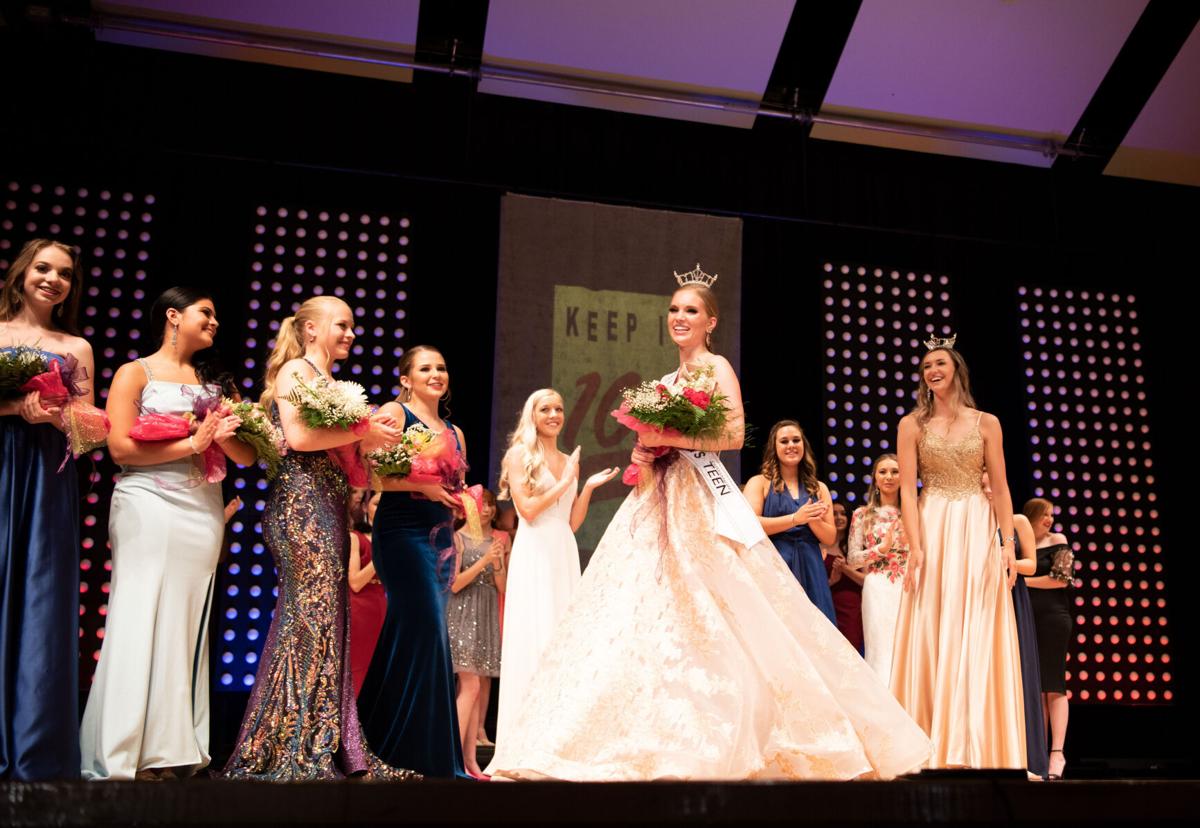 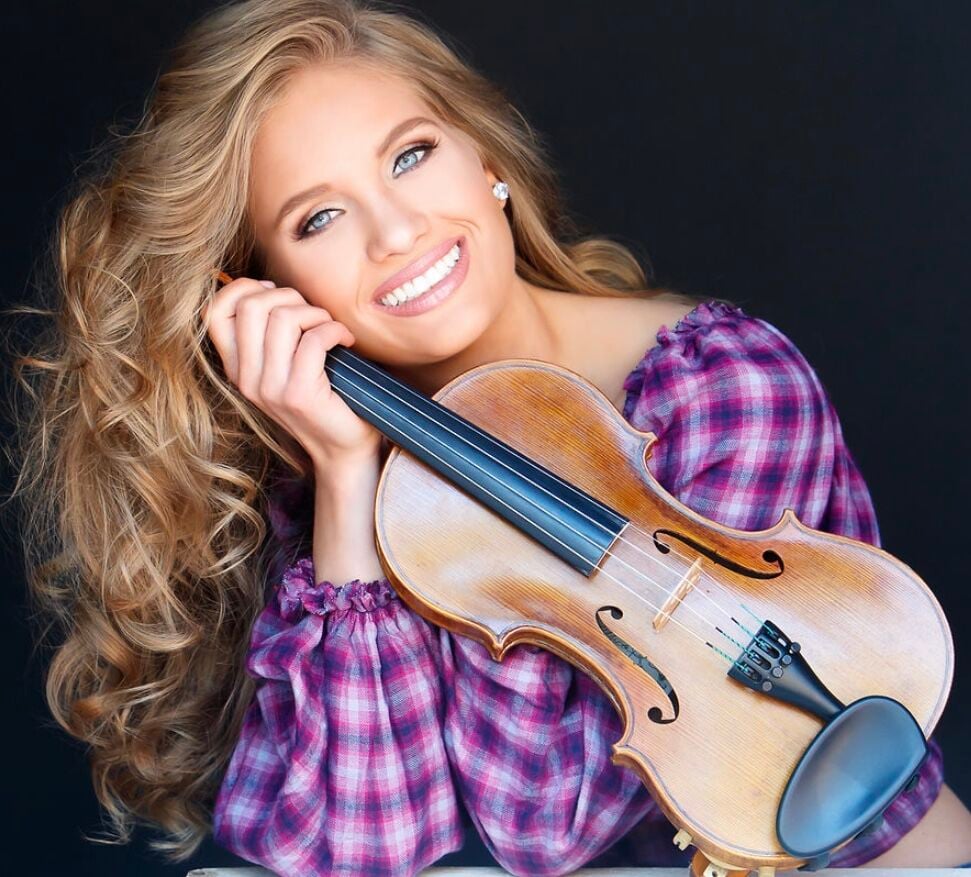 Sidney's Annika Bennion, 17, played her violin/fiddle during the talent portion of Montana's Miss Outstanding Teen 2020 pageant, which she won. 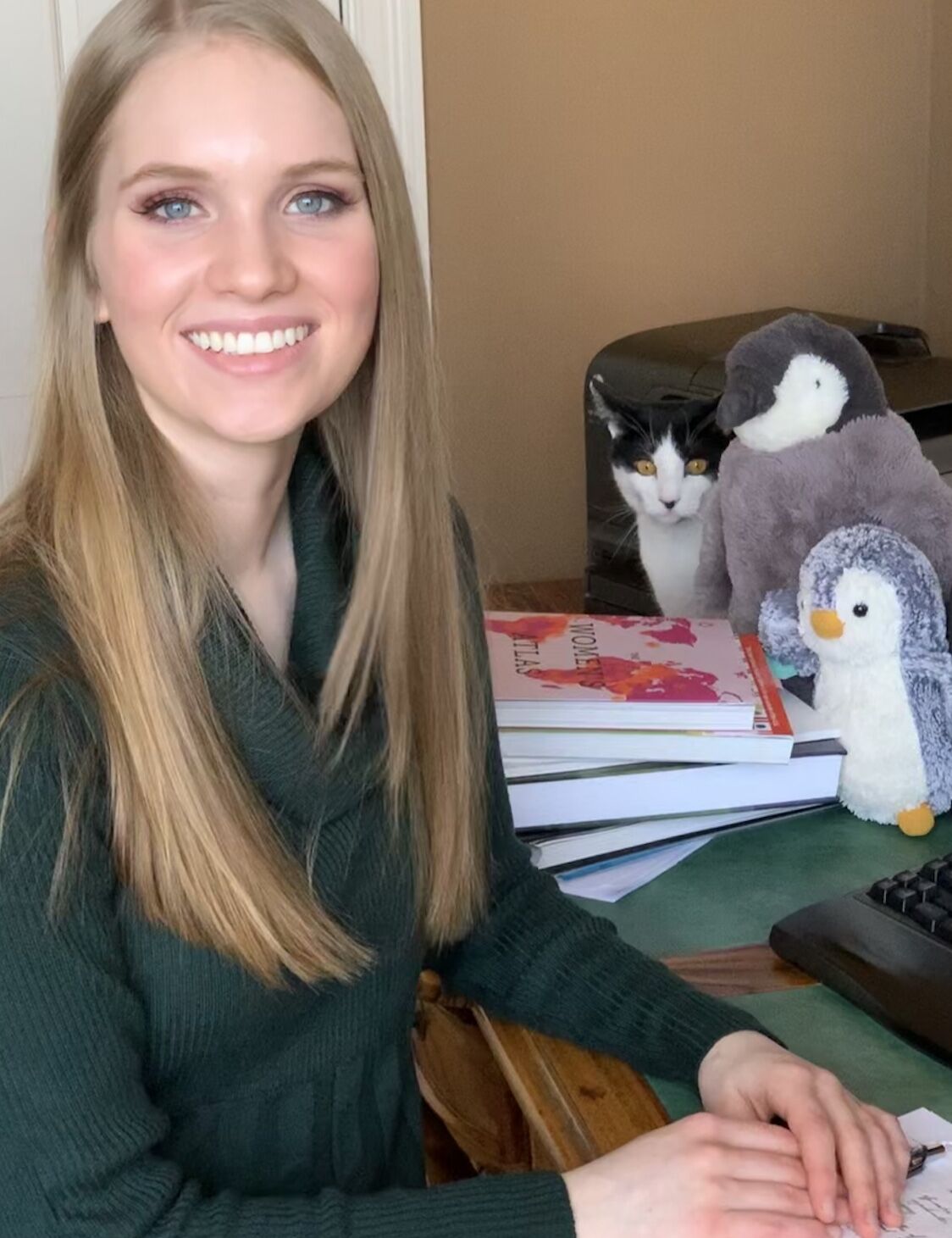 Annika Bennion of Sidney, at home in early 2020 working on her community project to educate local teens about vaping, appropriately titled "No NicoTeen." 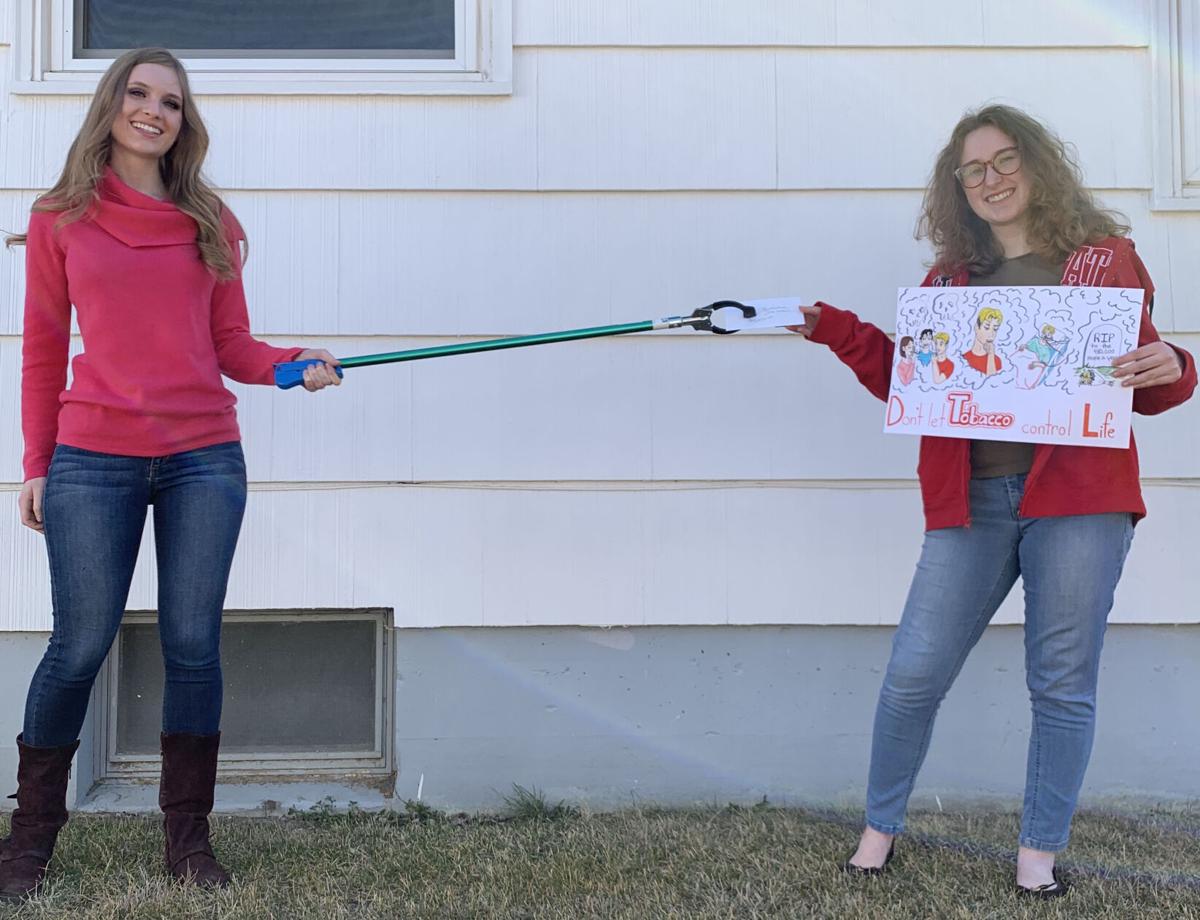 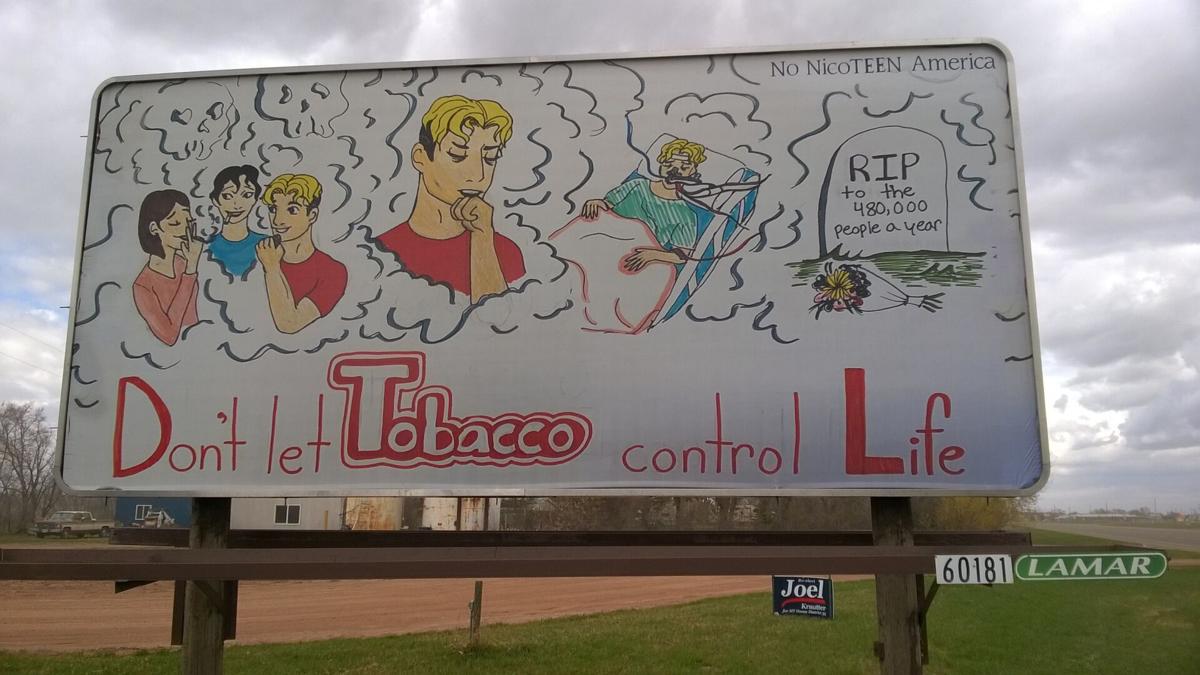 The "No NicoTeen" billboard near downtown Sidney, a reproduction of Autumn Davidson's winning poster design in a contest spearheaded by Annika Bennion.

Sidney's Annika Bennion, 17, played her violin/fiddle during the talent portion of Montana's Miss Outstanding Teen 2020 pageant, which she won.

Annika Bennion of Sidney, at home in early 2020 working on her community project to educate local teens about vaping, appropriately titled "No NicoTeen."

The "No NicoTeen" billboard near downtown Sidney, a reproduction of Autumn Davidson's winning poster design in a contest spearheaded by Annika Bennion.

Perseverance and natural talent paid off for Sidney’s Annika Bennion. The 17-year-old was crowned Miss Montana’s Outstanding Teen on July 24 in Glendive.

“I’m really excited about the two years ahead of me,” Annika told the Sidney Herald, noting she plans to leverage her platform to advance causes like persuading teens not to smoke tobacco, particularly vaping products.

It was a memorable night for Annika. In fact, it was a big night for all of Richland County. The top three contestants at this year’s Outstanding Teen competition are from Sidney.

“They were all really sweet,” Annika said of the young women competing this year. “It wasn’t like those pageant movies, where they’re all really caddy. This week, we didn’t have that drama.

“Everyone was helpful and encouraged each other,” she continued. “And I couldn’t have had a more wonderful crowd of people.”

The daughter of Dr. Brett and Daniela Bennion, Annika won a $1,100 scholarship and a chance to compete at Miss America’s Outstanding Teen Competition in 2021. In addition, she was voted online as Montana’s Choice, winning an additional $1,000 scholarship.

When she appeared onstage for the evening gown competition, the judges asked Annika to describe what she likes about her state.

“Especially during Covid time, I like the space we have,” she recalled during an interview the following day. “I’ve been to New York and it’s really crowded there. Montana is friendly and I really like our beautiful blue sky.”

For the talent portion, Annika “played a rousing rendition of Souvenir D’ Amerique that thrilled the audience,” a Miss Montana press release stated.

Although she is a classically trained violinist, Annika is a savvy competitor who chose a lively arrangement. In other words, she played to her audience.

“I wanted to have something that wasn’t too classical,” she said. “I wanted a song that would combine classical, [country] fiddle and jazz.”

It’s no secret in Sidney that Annika is devoted to persuading local teens not to smoke and to avoid the vaping craze. For the past year, she has worked with reAct on a Montana Tobacco Use Prevention program.

With a modest grant she procured, Annika organized a poster/billboard contest. The winning poster, created by Sidney High School student Autumn Davidson, was enlarged as a billboard and prominently displayed on the outskirts of town.

The anti-vaping project was not lost on the judges.

“Annika has volunteered over 600 hours of community service since the age of 5,” the Miss Montana press release explained. “Her social impact is No NicoTeen America.”

For education, Annika is participating in an advanced program through MSU Billings, where she has already earned 60 credits toward an undergraduate degree. She plans to devote the coming year to her new responsibilities as Montana’s Outstanding Teen, which runs through 2021 because of COVID-19.

When she graduates from college, however, Annika said she plans to enter an advanced-degree program with a focus on health care. Currently, Annika said she’s interested in artificial intelligence — how AI can be used to improve health care for patients and medical professionals.

Daniela Bennion said her daughter deserves credit for reaching out to others through social media for assistance in preparing for Montana’s Miss Outstanding Teen 2020 competition.

“She came very prepared and had a lot of coaching from all over the United States — and from Cammy Heck, who was Miss Montana Outstanding Teen in 2018,” Daniela said, adding that her daughter takes acting lessons online and has a voice teacher.

“These are skills that you carry with you for life,” Daniela said, pointing out her daughter is active with the Boys & Girls Club of Richland County. “I think Annika...understands the importance of being sociable.

“She takes responsibility for herself,” Daniela continued. “I’m really proud of her for being self-motivated and easy to work with.”

From the local youth club, Annika “learned the value of setting a good example,” Daniela said.

“Young people are looking for older kids to model after,” she continued, describing an emotional time when Annika showed up at an event to discover all the young girls were dressed up.

When asked why they were wearing dresses, Daniela said the girls responded: “’We want to be like Annika.’”

Now that she has been crowned Miss Montana’s Outstanding Teen, Annika has stepped up to assume an even bigger role.

Her mother credits the Miss Montana and Teen pageants for raising the bar by establishing goals for young women to follow.

“It’s an education that’s really important, that’s already woven into the program — like communicating, interviewing, public speaking, stage presence, social media [and] social initiative, which is what they do for the community volunteer program,” Daniela said of the Miss Montana pageant. “And talent and paperwork. There’s a lot of paperwork...it has to be done well. And right.”

Although she felt good about her daughter’s chances, Daniela confessed to a certain amount of anxiety leading up to the conclusion of the July 24 evening.

“It’s always a surprise because you just don’t know what’s going to happen,” she said. “It’s up to the judges. All you can do is be as prepared as possible.”

“It was a really difficult competition this year,” she said, explaining the nuances of the judging. “I’m really grateful to my family for supporting me through this. And the pageant director...and the board of directors for holding the event, even though it wasn’t the easiest thing this year, with Covid.”

Annika intimated she was initially overwhelmed when her name was announced as the new Miss Montana’s Outstanding Teen.

Now that it has sunk in, Annika has already started making plans for leveraging her new title to promote causes dear to her, like persuading teens not to smoke or vape.

“I’m going to find every social media platform I can,” she said. “I’m going to use Instagram and Facebook, and mobile marketing.”

Then, as if to give herself a break from all the commitments she has assumed, Annika said: “I’m just really happy.”