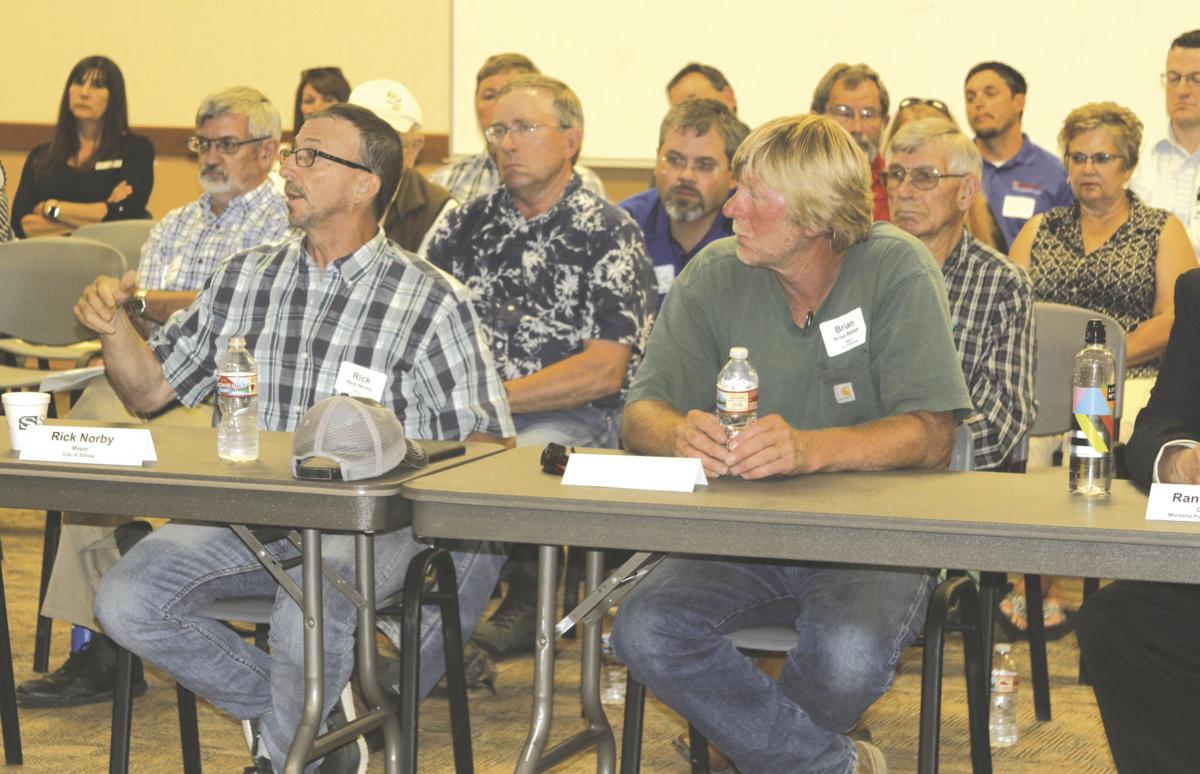 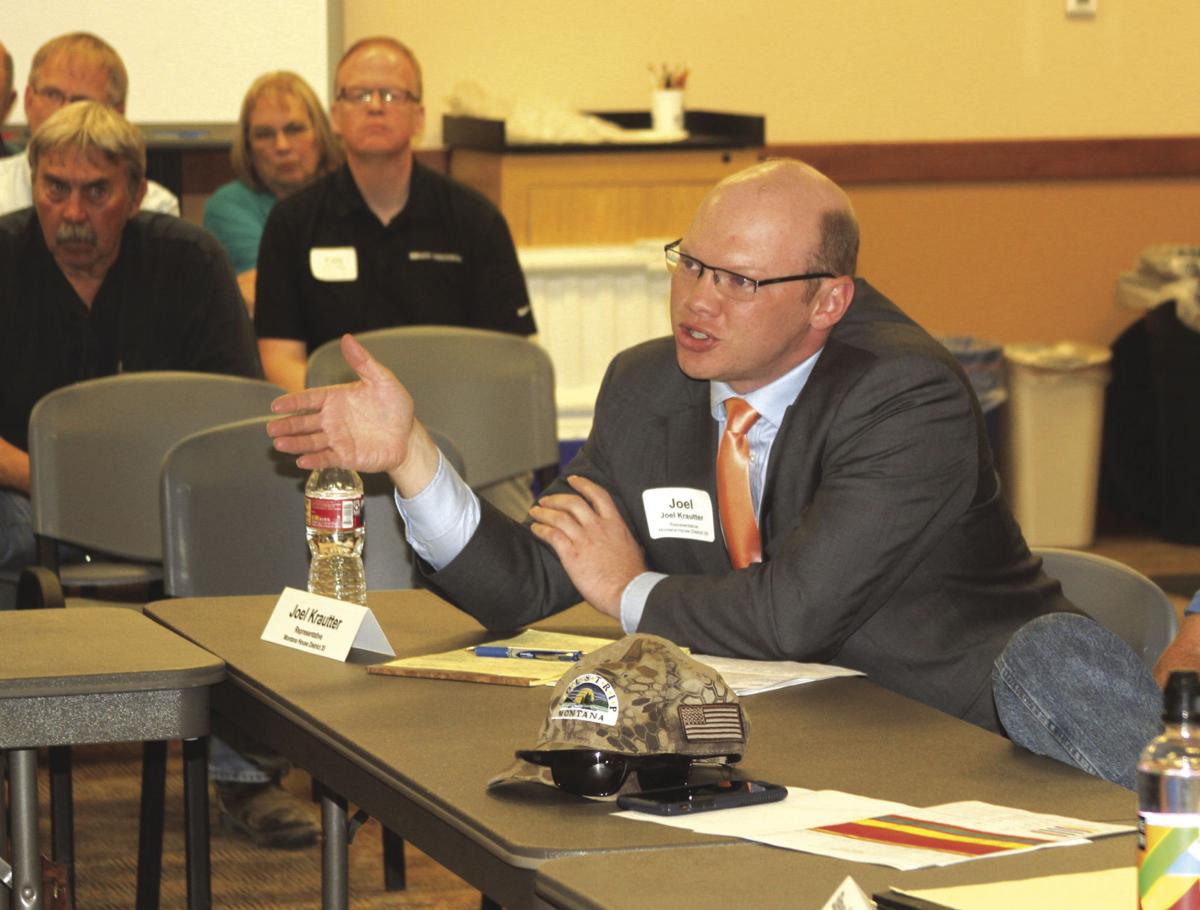 Rep. Joel Krautter asked MDU about the impact to rate payers for the demolition of the Lewis and Clark Station in Sidney during the community meeting Monday, July 15 in Sidney.

Rep. Joel Krautter asked MDU about the impact to rate payers for the demolition of the Lewis and Clark Station in Sidney during the community meeting Monday, July 15 in Sidney.

If one thing was made clear at the Montana-Dakota Utilities (MDU) meeting Monday afternoon, it’s that MDU’s decision to close the Lewis and Clark Station was made a long time ago. That notion left Richland County Commissioners, Sidney Mayor Rick Norby, Fairview Mayor Brian Bieber, Rep. Joel Krautter, Montana Public Service Commissioner Randy Pinocci and Sen. Steve Hinebauch feeling frustrated with the premise of the meeting, which came through as too little too late for most those in attendance.

“When we look at the Heskett and Lewis and Clark station, they served our customers very well for over 60 years, but they’re no longer economical to run as compared to other alternatives we have available to us,” said Darcy Neigum, director of system operations and planning at MDU. “The decision has been made to close the Lewis and Clark station and Heskett units at the end of their current coal supplier agreements.”

After a presentation about MDU’s decision from Neigum, MDU’s president and CEO Nicole Kivisto and Jay Skabo, vice president of electric supply, community members had the chance to discuss the information.

“I know that figures don’t lie, but liars do figure,” Mitchell said. In a cost comparison chart presented by MDU, wind energy had an estimated cost of $25.63 per mega watt hour (MWh), compared to $53.76/MWh for Lewis and Clark. “How much tax incentive makes that as low as it is and how long do we have the tax incentives for the wind farms?”

“The thing I want to clarify is that 10-year benefit is baked into the $25.63, so in other words, that’s a levelized cost on average across that whole 25-year period,” Kivisto said.

“I understand that, but here’s the concern I have,” Mitchell said. “When these tax incentives leave the wind farms and the solar panels and all this unsustainable energy, what is going to happen to your operation when you lose this tax incentive?

“It’s a fictitious number, because we as tax payers are paying that tax incentive. So we’re getting hit both ways. You say you’re saving us $20 million dollars as customers, but how much is it costing us in tax incentives for that fake number?”

Other concerns brought up at the meeting included the loss of MDU employees, the Savage mine, Sidney Sugars and those tax dollars.

“We have 24 employees that are fixing to either leave this town or find different employment,” Mitchell said. “According to the chamber of commerce, every dollar earned in a community turns six to seven times. How much is that going to cost Sidney?”

“We understand the impact to the community,” Kivisto said. “I come back to our objective as a company: safe, reliable, cost-effective. I’m staring at these numbers saying I can do better for my customers. My job is to make that decision.”

Kivisto said they were there to start the dialogue and hear what solutions the community had come up with.

“It looks like you should have started the dialogue way before now because the gate’s already open,” Commissioner Loren Young said.

MDU revealed they would be demolishing the Lewis and Clark Station. Rep. Krautter wanted to know what the estimated cost would be to rate payers.

“We’re still working on the estimates for that,” Neigum said.

Krautter asked about any exploration of selling the Lewis and Clark Station versus demolition. Neigum said if a buyer were to come in, they would be in the same economic position as MDU.

“We have not been inquired by anyone else and there really isn’t a lot of interest by others of wanting to come in and own assets like this, especially when they’re 61 years old,” Negium said.

That topic came up again at the hands of Public Service Commissioner Randy Pinocci. Over in Colstrip, Pinocci said NorthWestern Energy is purchasing a portion of Colstrip for $1 under the support of Senate Bill 278. The bill aims to save jobs, preserve the economy and provide Montanans with low-cost power. Pinocci wanted to know why something similar wasn’t possible for the Sidney coal plant. It’s a question that keeps coming across his desk.

“Why don’t we do that here in this case? This give us the possibility of the plant continuing,” he said. “Rate payers will be charged with tearing it down. Save the cost, save jobs in Sidney and Savage and have more base-load power.”

Pinocci explained that last winter, Northwestern Energy didn’t produce enough power in one of the cold months, so they had to go to the open market to buy power. They paid $900/MWh and it ended up costing them approximately $20 million for one month. They came to the Public Service Commission to raise their rates to make up the cost.

“Northwest Energy would have bought every penny that Sidney had to produce and that price there is tremendously lower than what they had to pay during that cold snap,” Pinocci said. “I want to explain to people why the western part of the state thinks this is a huge mistake to close this plant down, because of what happened to Northwest Energy. If we lose Savage and we can’t fund the school and we lose the jobs, we might be better off paying a little bit more for our electricity. It might pencil out.”

Pinocci said he wanted people to understand when the wind is blowing, wind-generated energy is cheap, but there’s an obvious flip side to that.

“When the wind shuts off, you have to turn on a turbine to make up that energy,” he said. “That is more expensive than wind energy and it costs consumers more when that wind shuts off.”

In a phone interview the day after the meeting, Pinocci said he made a commitment to see areas like Colstrip and Sidney through losing their coal plants.

“I’m trying to represent the people of the district. This is a really important issue,” he said. “We are going to close a coal-fire plant that’s been in Montana for many, many years. I made the promise that I would watch things closely. That’s why I was at that meeting… There’s not much we can do to convince MDU. They made their decision.”

Kivisto said she knows it feels like they are late to the conversation, but the age of the units was something to keep in mind.

“Even if today we were to say, ‘We feel like it’s in the best interest to continue to operate these units,’ we have to continue to put capital in them, to maintain them and they are already 60 years old,” she said.

Pinocci said the answer was simple. “Is a new plant more efficient? Of course, that’s technology. But don’t tell me this plant has to be shut down because of age. Any part can be remade. The plant can last forever.”

Sidney Mayor Rick Norby spoke to his frustrations with MDU at the meeting.

“I mean no disrespect for what I’m going to say,” he said. “I sit here and I listen to you say you do what’s best for customers in this area. The outcome from this closing — do you really believe it’s the best thing for people in this community? I don’t buy that. For me to look at what the domino effects are going to be and what’s going to happen here… Everybody in this room who lives here locally, I guarantee is willing to pay more for electricity if they don’t lose the tax base, Savage school, things like that… I have trouble listening to you say that you’re doing what’s best for your customers in this area. Everything is a figure. A dollar figure. These are real lives this is going to effect. It’s devastating. This isn’t what’s best for these customers.”

Kivisto said while she appreciates Mayor Norby’s opinion, the decision wasn’t just about Sidney, but about MDU’s 130,000 other customers too.

“Everybody that builds a business knows there has to be money put back into it to survive,” Norby said. “I can’t walk away from this meeting feeling good about this. It’s just wrong. I honestly believe if the commissioners and the mayor and council wouldn’t have signed a resolution, you wouldn’t be here today to even explain yourself.”

Fairview Mayor Brian Bieber asked if the decision to close the Lewis and Clark Station was the result of pressure from environmental groups. Kivisto said it was not a fuel source decision, but an economic one.

“That being said, I will tell you we have investors that have said because you own coal in your portfolio, we’re not going to invest in MDU stock. But that is not factored into our decision to do this,” she said.

The answers ultimately offered by MDU to relieve some of the impact to the county are the Just Transition Fund, which helps coal-affected communities, helping the country treasurer with tax revenues and keeping a balanced budget.

“We’ve started to do some homework around some of these items, but wanted to have this meeting so we could hear from you about what ideas you might have,” Kivisto said.

The resounding idea from community members? Don’t close the Lewis and Clark Station.

“I can’t walk away from this meeting feeling good about this. It’s just wrong. I honestly believe it the commissioners and the mayor and council wouldn’t have signed a resolution, you wouldn’t be here today to even explain yourself.” -Sidney Mayor Rick Norby

“If we lose Savage and we can’t fund the school and we lose the jobs, we might be better off paying a little bit more for our electricity. It might pencil out.” -Public Service Commissioner Randy Pinocci