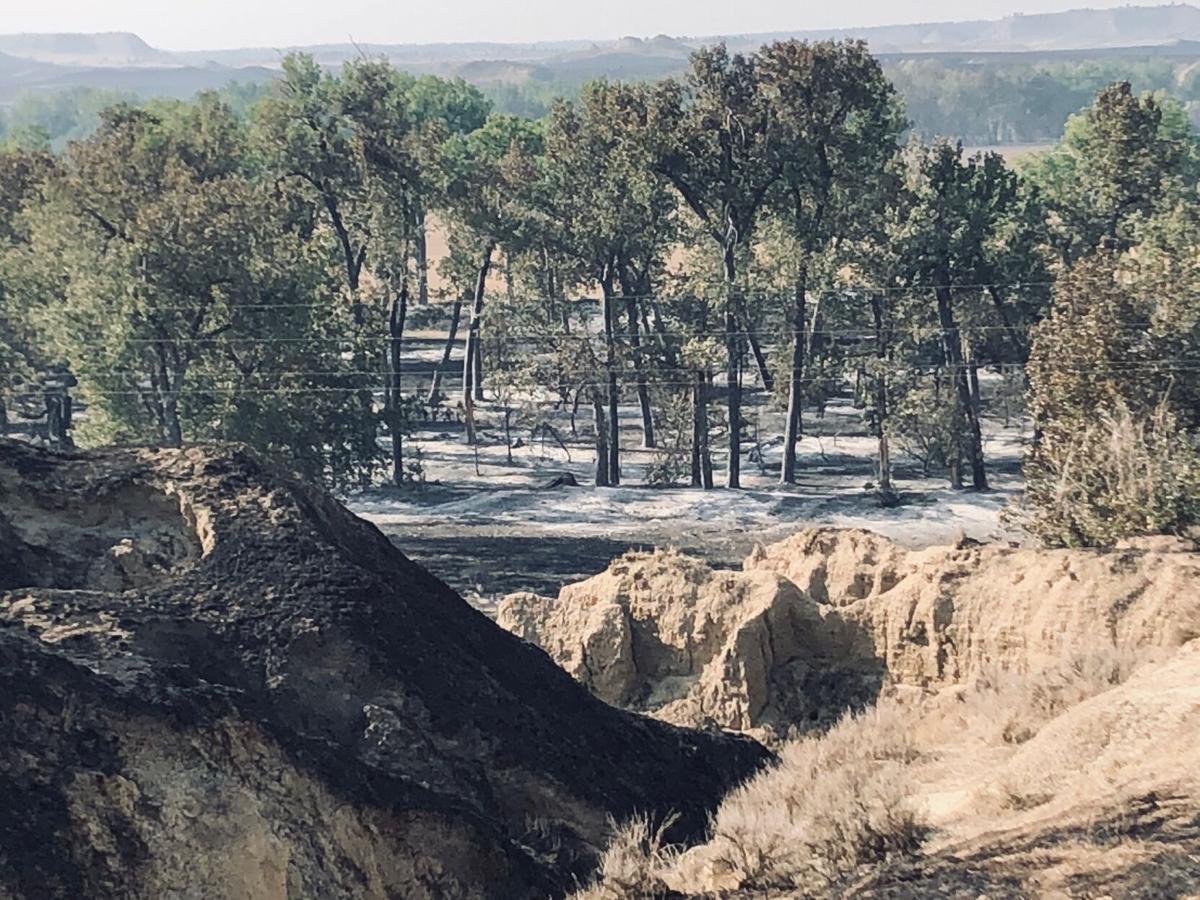 The Rice and Snider Fire burned more than 47,000 acres but reportedly was 95% contained as of Labor Day morning. 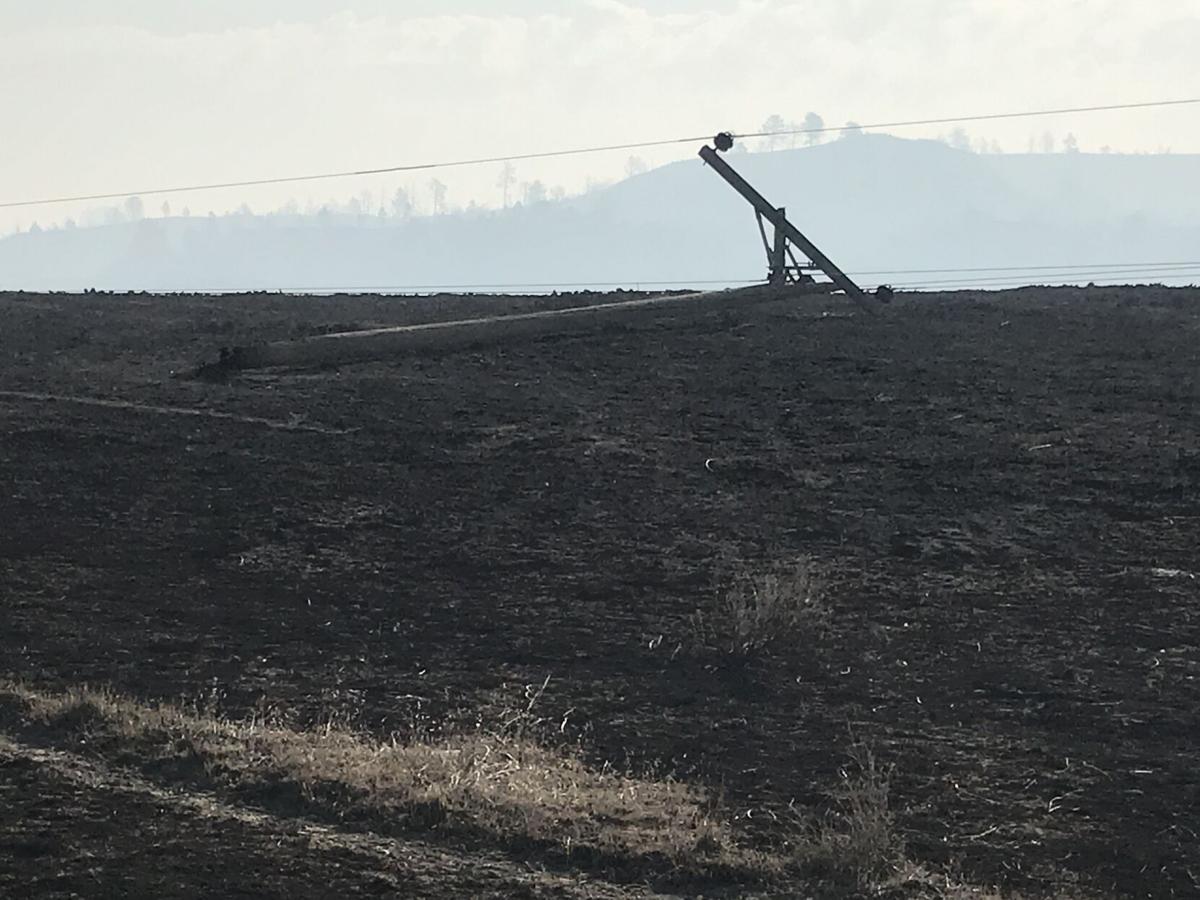 Power lines were charred in the recent Rice and Snider Fire. 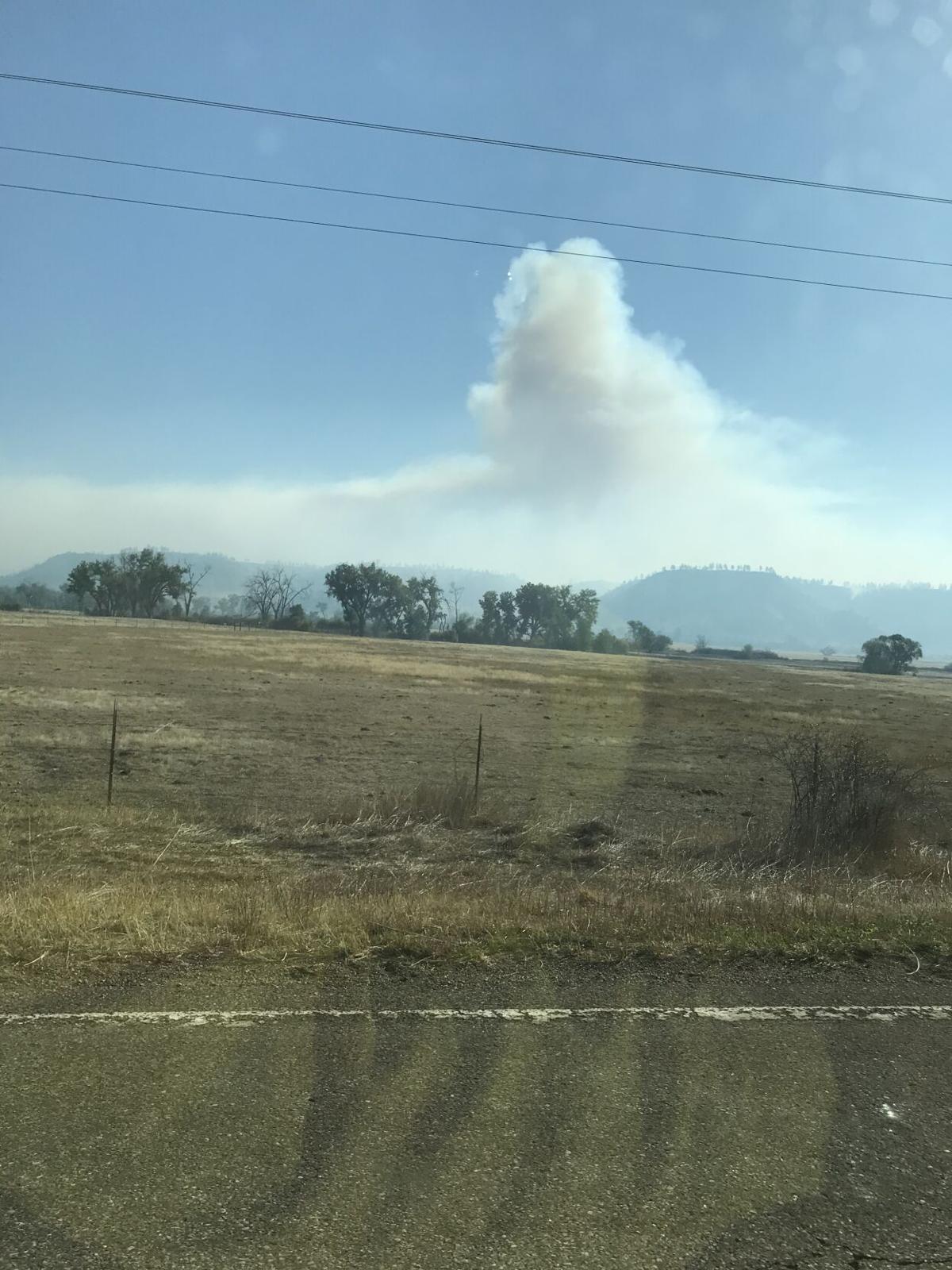 The Rice Fire near Ashland reportedly was fueled by cottonwood trees. 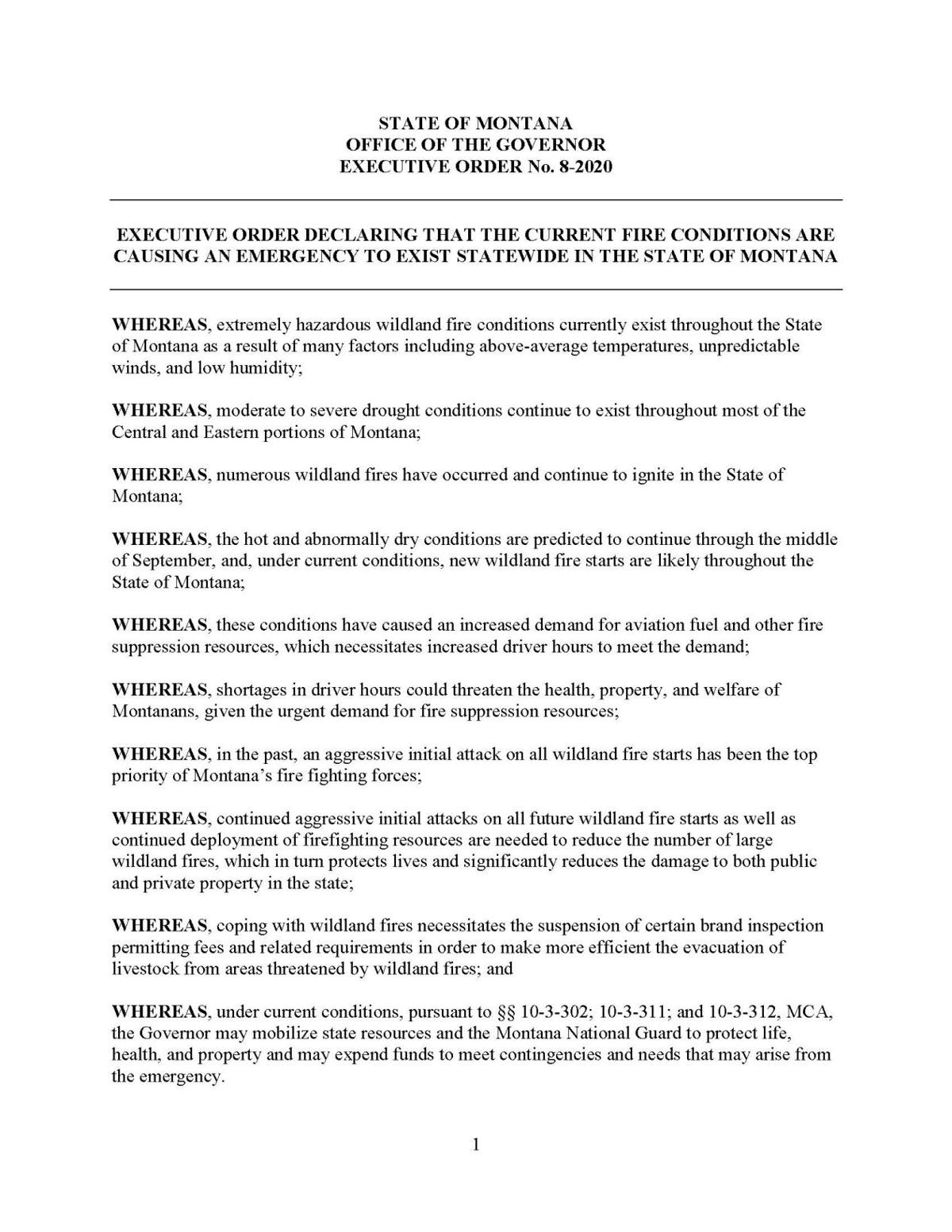 Page 1 of Gov. Steve Bullock's Executive Order declaring a state of emergency in Montana due to current fire conditions. 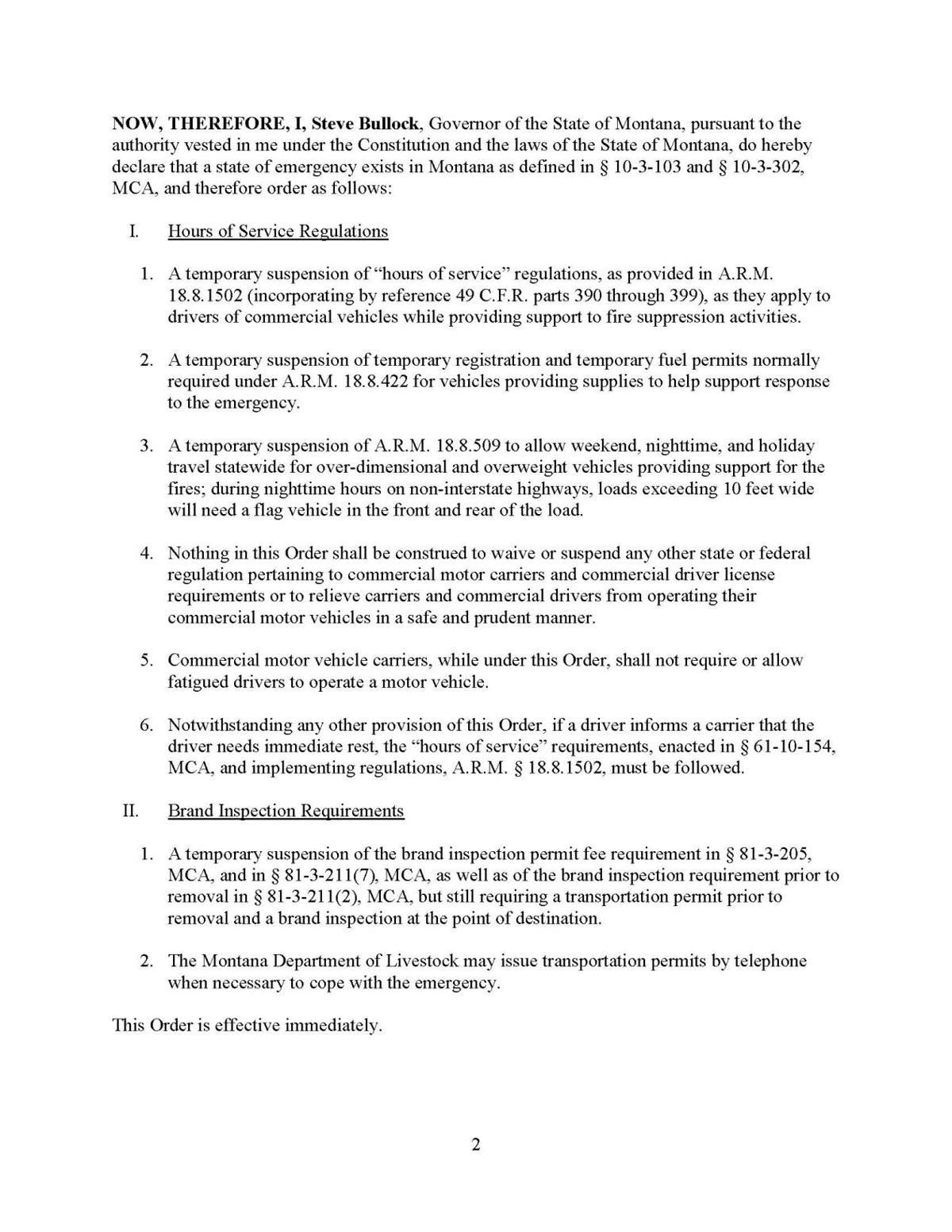 Page 2 of Gov. Steve Bullock's Executive Order declaring a state of emergency in Montana due to current fire conditions.

The Rice and Snider Fire burned more than 47,000 acres but reportedly was 95% contained as of Labor Day morning.

Power lines were charred in the recent Rice and Snider Fire.

The Rice Fire near Ashland reportedly was fueled by cottonwood trees.

Page 1 of Gov. Steve Bullock's Executive Order declaring a state of emergency in Montana due to current fire conditions.

Page 2 of Gov. Steve Bullock's Executive Order declaring a state of emergency in Montana due to current fire conditions.

As of Sept. 6, 2020, more than 200,000 acres of land had burned across Montana. One of the most severe outbreaks, dubbed the Rice and Snider Fire, centered near Ashland along the Tongue River, where cottonwood trees fueled the flames.

The Rice and Snider Fire was reported to be 95% contained as of September 7. Combined, the two fires charred more than 47,000 acres.

A bit closer to Richland County, the Huff Fire near the town of Jordan was raising concerns across the state and within Gov. Bullock’s office. The Huff Fire — close to the Missouri River in northeast Montana — had burned almost 47,000 acres by Sunday morning, Sept. 6, 2020, according to a DNRC incident report.

Both the BobCat and Huff fires were attributed to “human cause,” according to Gov. Bullock, who held a press conference on September 3 to address the state’s wildfires and ongoing efforts to fight the COVID-19 pandemic.

“Due to what’s really extreme fire weather conditions,” Gov. Bullock hinted he might take extreme measures to extinguish the wildfires.

“Whereas, extremely hazardous wildfire conditions currently exist throughout the State of Montana as a result of many factors including above-average temperatures, unpredictable winds, and low humidity,” Gov. Bullock’s Executive Order stated it was necessary to take immediate action.

In a press release announcing the state-of-emergency declaration, Gov. Bullock stated: “Local, state, and federal partners, and the brave men and women on the front lines are working together to take on this fire season and we are prepared to use every resource available to protect Montana lives and property.”

Executive Order No. 8-2020 requires the deployment of extra firefighting resources, mobilization of the Montana National Guard and “the suspension of certain brand inspection permitting fees and related requirements in order to make more efficient the evacuation of livestock from areas threatened by wildfires.”

During the press conference, Gov. Bullock made clear Montana is seeking assistance from the Federal Emergency Management Agency (FEMA) to help fund firefighting efforts across the state.

“I am thankful to FEMA for their quick turnaround regarding these fires,” Gov. Bullock said, noting the unprecedented speed at which FEMA has responded to Montana’s requests for assistance.

Meanwhile, U.S. Sen. Steve Daines issued a statement pointing out the Republican senator is visiting areas of the state hit by recent wildfires, including the Bridger Foothills Fire near Bozeman.

Republican Sen. Daines and Democrat Gov. Bullock are locked in a battle for the U.S. Senate.

“Daines’ visit follows an announcement that the Federal Emergency Management Agency (FEMA) has authorized federal funds to help with the costs of fighting the Bridger Foothills Fire,” the press release stated.

“I appreciate FEMA’s quick response to providing this assistance and to the firefighters working diligently to keep the community of Bozeman safe,” Gov. Bullock stated. “We ask that Montanans continue to stay safe, stay informed, and take every precaution to prevent a wildfire.”

During the press conference, Gov. Bullock requested all landowners across the state exercise extreme caution during the dry and windy month of September.

As if the recent wildfires were not enough cause for alarm, Gov. Bullock also addressed the COVID-19 pandemic.

Combined, the wildfires and coronavirus are draining valuable state resources. However, Gov. Bullock said Montana’s budget is currently able to handle both emergencies, thanks largely to forward planning and federal assistance.

Noting that Montana has seen seven consecutive weeks with up to 700 new positive-tested cases of COVID-19 per week, Gov. Bullock warned people not to become complacent.

He also expressed concerns about elderly residents in the state, where Gov. Bullock said 47 out of 480 long-term-care facilities have reported new COVID-19 cases.

Heading into Labor Day weekend, Gov. Bullock offered this message to Montanans: “Let’s enjoy one another without letting our guard down.”