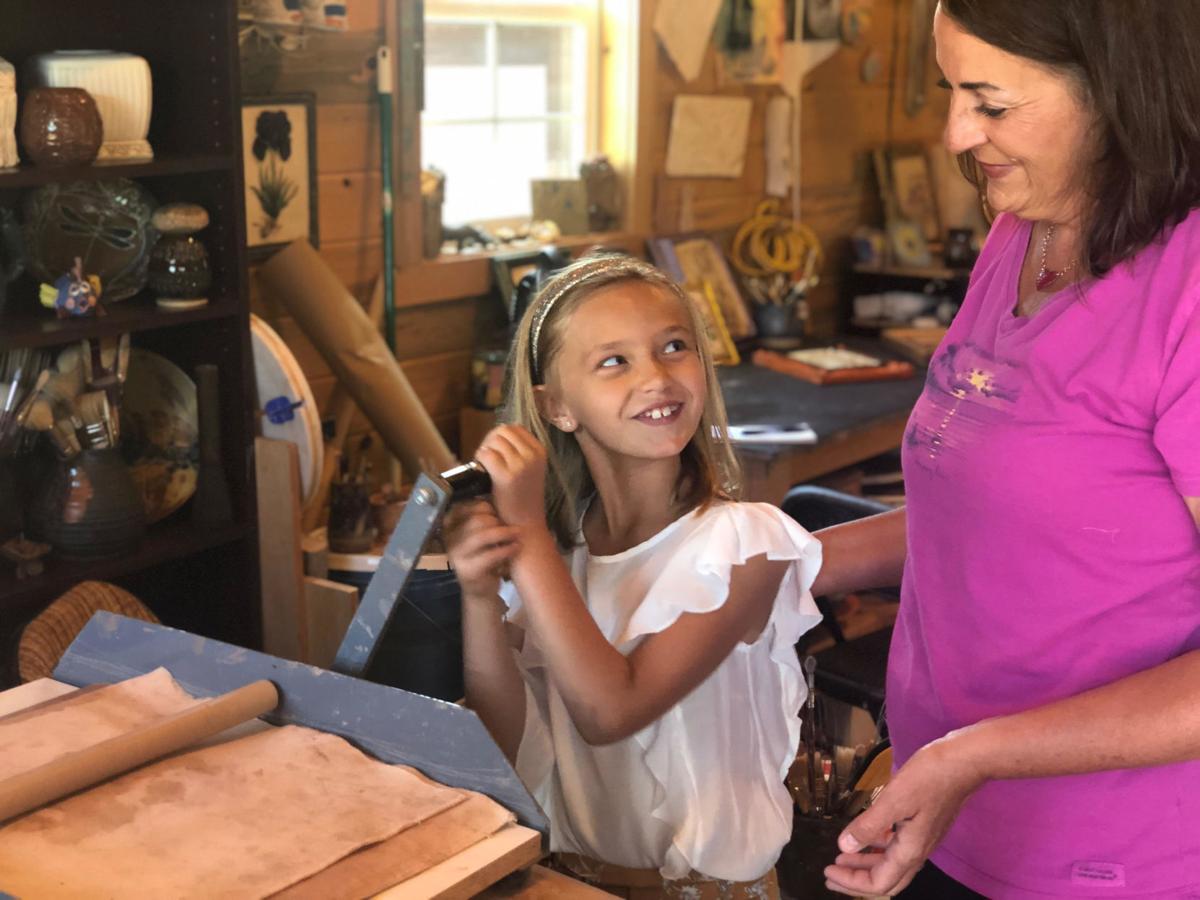 Henri Haugen rolls out a slab of clay with her grandmother Shelly Haugen in the art studio on the family ranch. The pair put together their second art show, set for Sept. 14, to benefit the Boys and Girls Club of the MonDak. 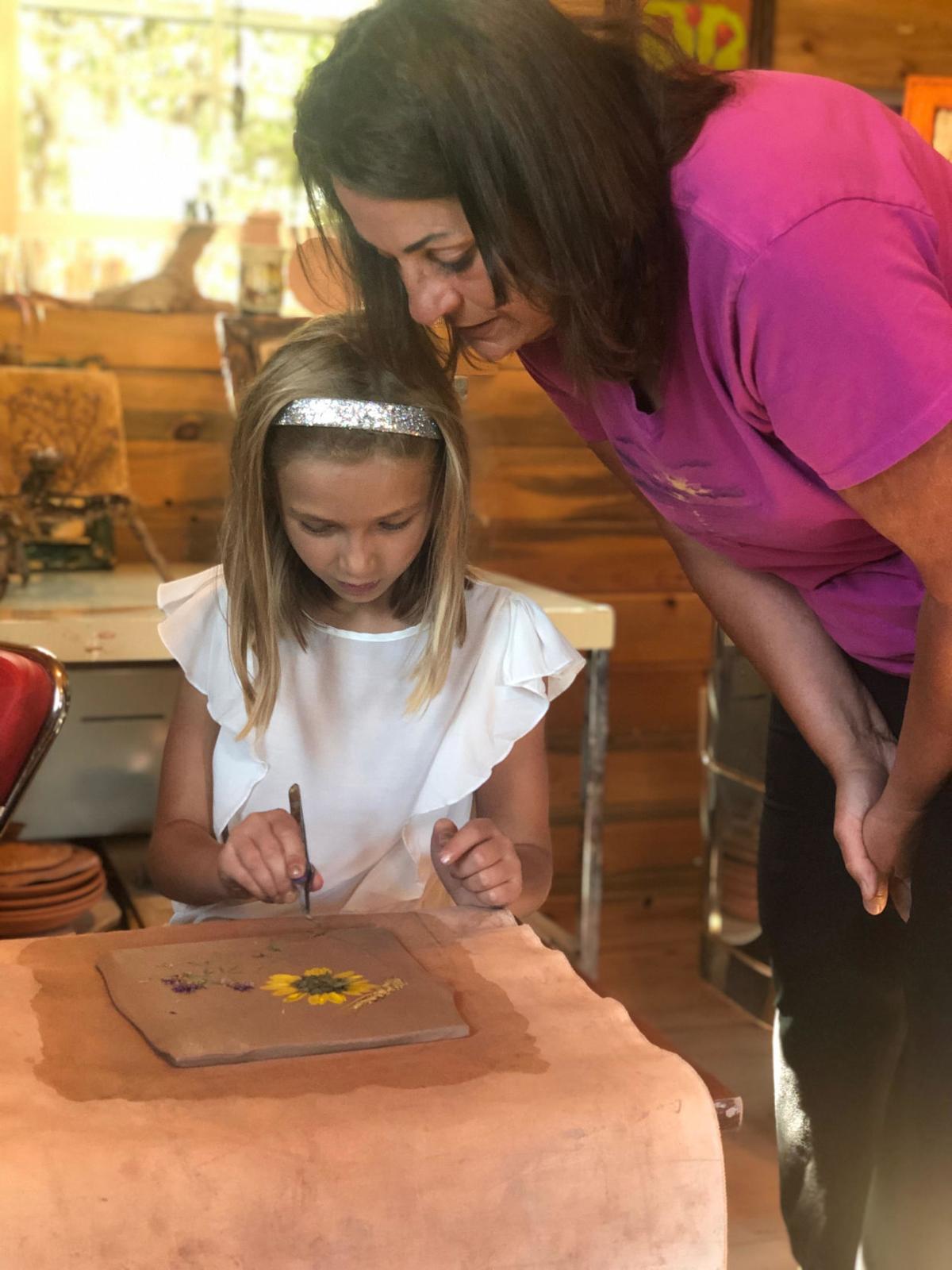 Henri Haugen carefully picks out wildflowers from a clay slab under her grandma Shelly’s watchful eye.

Henri Haugen rolls out a slab of clay with her grandmother Shelly Haugen in the art studio on the family ranch. The pair put together their second art show, set for Sept. 14, to benefit the Boys and Girls Club of the MonDak.

Henri Haugen carefully picks out wildflowers from a clay slab under her grandma Shelly’s watchful eye.

A few miles up the highway from Sather Dam in the sprawling plains of western North Dakota lies a small art studio, found in a quaint log cabin on a multi-generational family ranch. One could find Shelly Haugen painting, sculpting or throwing clay most days of the week. A person can also spot her 7-year- old granddaughter Henri by her side in her miniature artist’s apron.

Together, the artistic duo is putting together their second art show featuring botanical casts of wildflowers. The show will be Saturday, Sept. 14, from 3-5 p.m. at Boys and Girls Club of the MonDak. All proceeds from the show and the accompanying lemonade/coffee stand will go to the Boys and Girls Club.

“I’ve been doing art with my grandma since I was 9 days old,” Henri said proudly.

“It’s true,” Shelly said. “For her room, I painted a big pair of really cute cowboy boots and we wrote a little note on there and then we put Henri’s little baby feet across those boots.”

“And then on the back there’s scribbles from me,” Henri said.

Shelly grew up learning the informal names for the wildflowers that occupy the family ranch with her mother and aunt. It was something she was happy to pass along to her seven grandchildren (plus one on the way). With Henri living right up the driveway from Grandma’s house, the two have bonded over the years through their creative outlets.

“I had seen these botanical casts by an artist in Australia,” Shelly said. “I wasn’t sure how she did them, so through a lot of trial and error, Henri and I devised a method. We’ve come up with pretty darn exact replicas of the wildflowers. It’s a process, but a fun one.”

In Henri’s lifetime, art with Grandma has been a staple activity. Shelly has helped her develop and hone her skills over the years.

“When I turned about 4, Grandma started to teach me how to draw circles, then she taught me to do flowers. I started coming here doing pottery and when I turned 5 we started doing this,” Henri said.

Henri has her own mini pottery wheel and has just started to experiment on Grandma’s full-size wheel. She’s getting stronger and better at throwing clay with each practice run.

“When I taught her to draw, we started with circles and we’ve expanded,” Shelly said. “We’ve been writing a children’s book and we are illustrating it ourselves. We’re just doing it for fun right now, but it’s honestly a cute little story. Here we are, two girls in the middle of North Dakota writing about sea horses.”

The last art show for the Boys and Girls club was in 2016. Shelly said in between, Mother Nature didn’t cooperate.

“We were dry and we need to have some rain to make the flowers,” she said.

The girls are happy to be back in business for this year.

“I really believe that art is such a good expression for anybody,” Shelly said. “It’s a really good creative, positive outlet. I can’t think of a better way to show that to my grandkids and Henri.”

For Shelly and Henri, art not only serves as an outlet, but also as a means of giving back. With the 18 botanical casts prepared for the art show, Shelly is thankful to pass the tradition of giving on to another generation.

“I’ve picked crocuses since I was a little girl and would give bouquets to nursing home residents,” Shelly said. “Giving has always just been part of who I am. I’m just so blessed that I can. I wanted to teach Henri the joy of being able to do for others that sometimes can’t do for themselves.”

The Boys and Girls Club was a natural fit for donation. Shelly has a niece who was a single mother in Wyoming and her son went to their local clubhouse after school.

“I was so grateful he had a safe place to go,” Shelly said. “I just think all kids should have a safe haven. The Boys and Girls Club supplies meals, snacks, and there are so many kids who need a place. So this is our small way of giving back.”

As for the botanical casts, Henri has a special affection for the gumbo lily piece.

Gumbo lilies are special to Shelly and Henri because they aren’t found every year. They weren’t in the last art show the pair put together. She also likes the prairie rose cast, which is the North Dakota state flower.

The passion for the process is evident between the pair, who have developed a special bond in their little art studio.

“Henri has a really creative mind,” Shelly said. “Henri sees pictures in clouds and things like that and so do I. It’s just funny, our similarities.”

“We have the exact same minds,” Henri said to Shelly. “When I think something you always guess it.”

“Our brains are connected,” Shelly said.