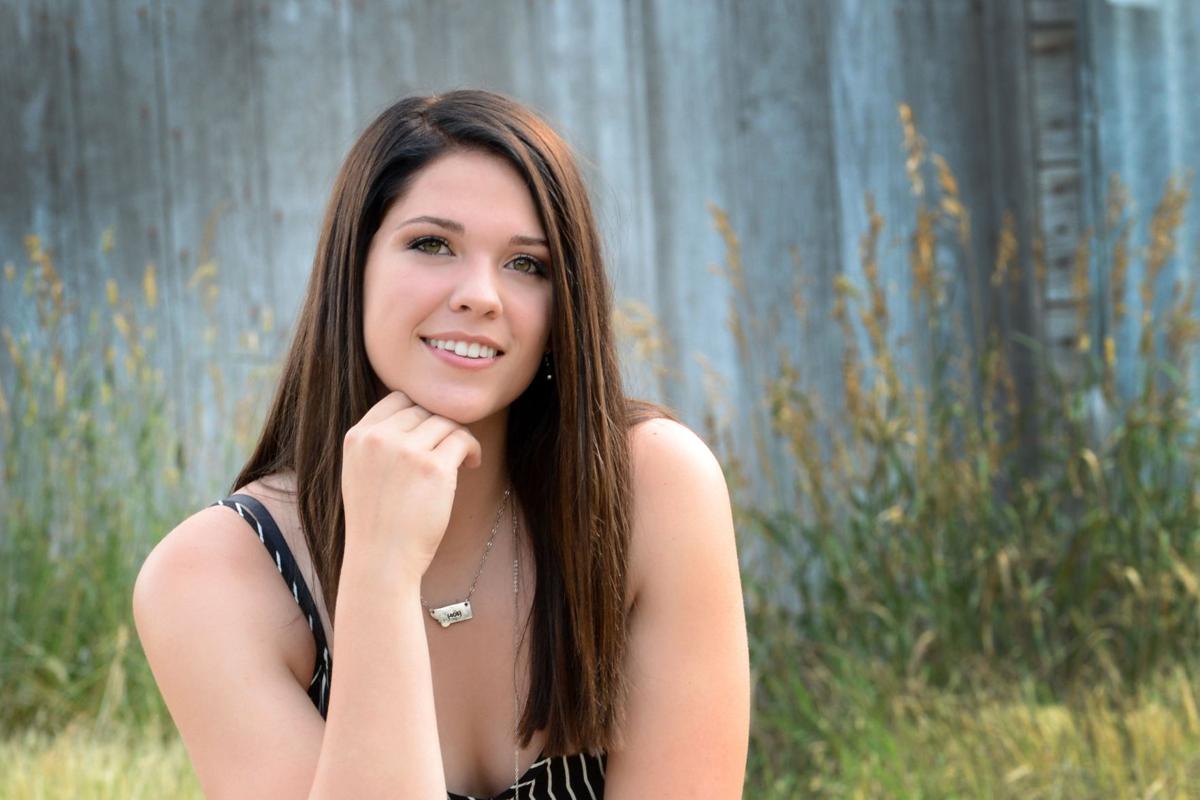 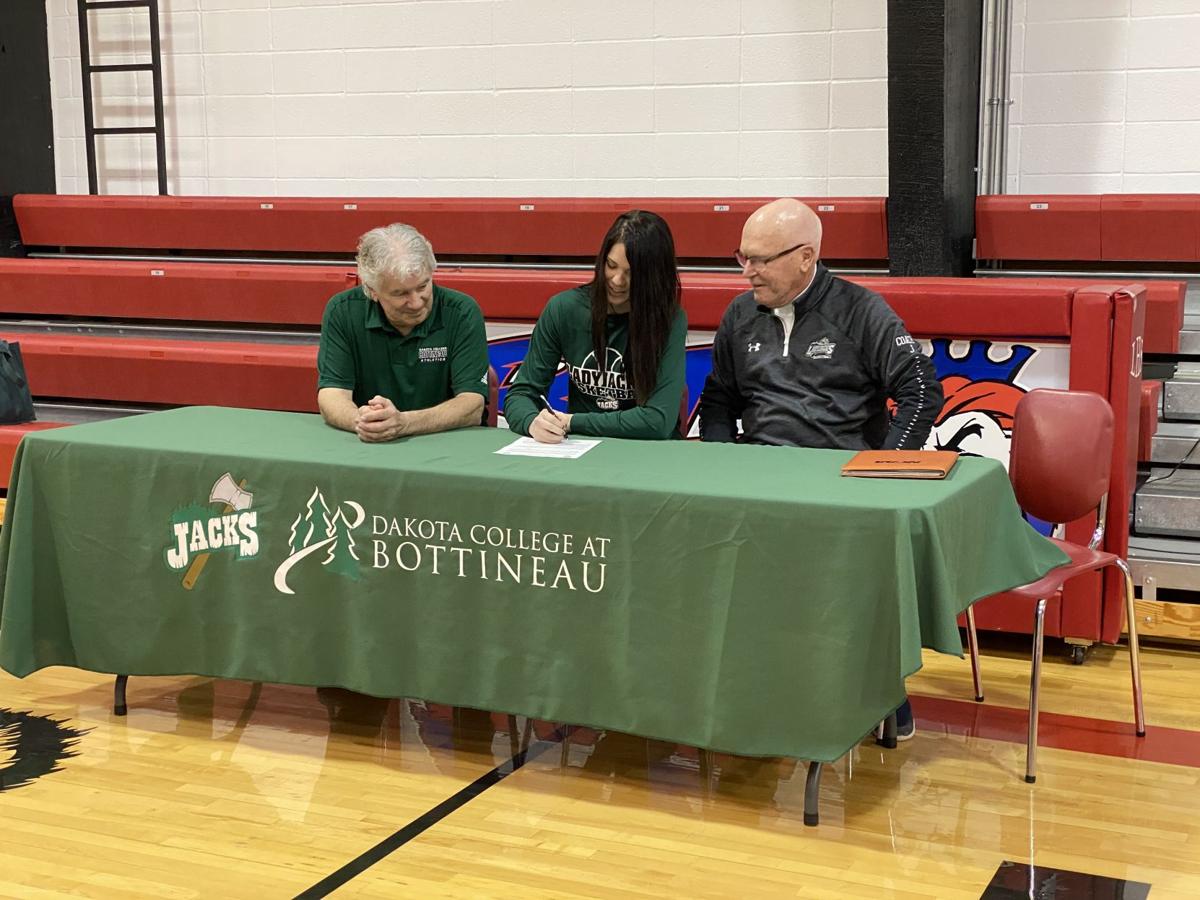 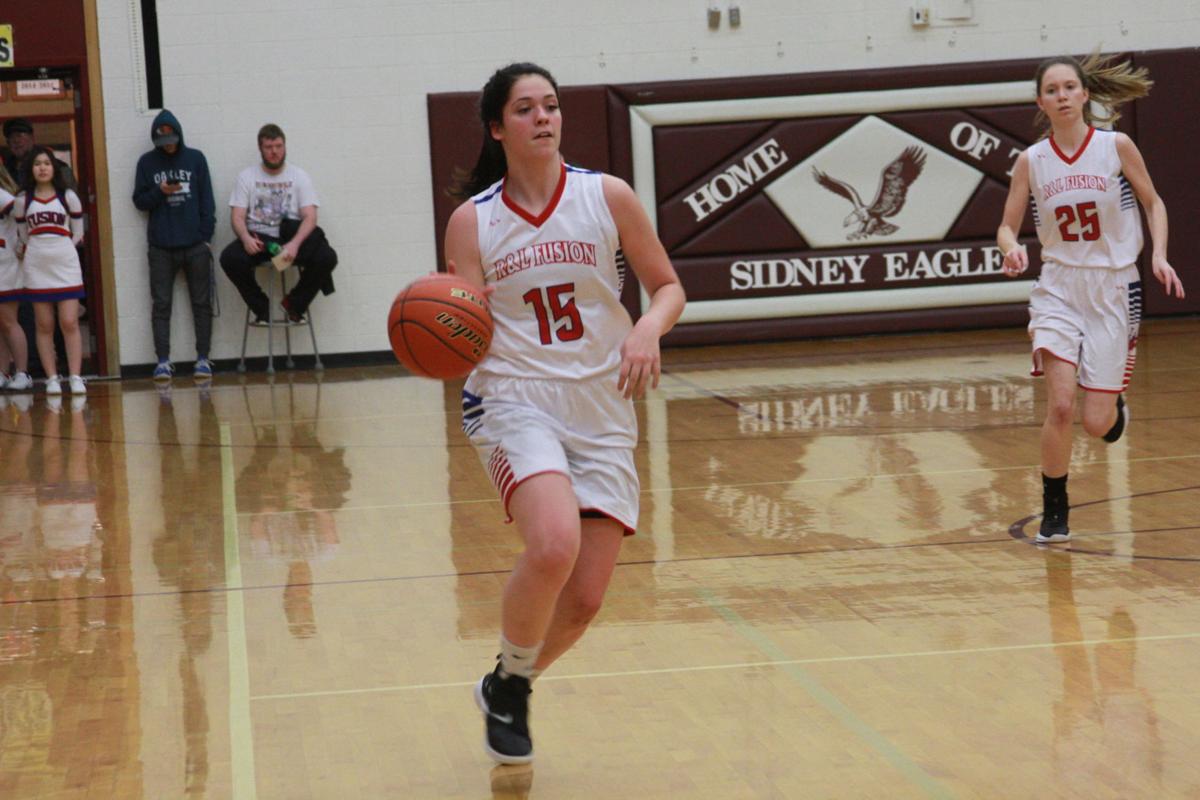 Driving up the court is R&L Fusion senior Courtney Herman in a matchup against the Brockton Lady Warriors during the 2019–2020 basketball season.

Driving up the court is R&L Fusion senior Courtney Herman in a matchup against the Brockton Lady Warriors during the 2019–2020 basketball season.

Courtney Herman, 18, is a senior at Lambert High School. As an unprecedented end of the school year comes to a close, Herman is excited to begin her college journey in the fall as a member of the Dakota College at Bottineau Ladyjacks basketball team.

To say she has been thinking about college would be an understatement.

"I've been dreaming of college for a while now," Herman said. "I can't wait to form those lifetime friendships that everyone's always talking about, but I'm also excited about the career path I've chosen."

She didn't see herself participating in athletics in college outside of intramural sports until midway through her senior year, Herman said.

"It wasn't until the middle of January of my senior season. I never thought I would be good enough to continue at the college level, so I never really looked into it," Herman said. "If it weren't for Bill Triplett, I would've never been given this opportunity. He sent my name to the coach in Bottineau. It was a huge decision for me because I also have a pretty big career goal as well. I was on the fence about playing college ball because of schooling. My cousin Haylie and I were invited to a college visit in February and that sold it for me. I loved the family-like atmosphere there and the team was like sisters and that's something I want to be a part of; I told myself that this was a once in a lifetime offer, 'If you don't do it now, then you'll regret not doing it at all.' I said yes to their offer within the week after the visit."

As a senior, Herman averaged 12.8 points per game and 5.2 rebounds. She shot 73 percent from the free throw line. She was selected to the All-District team as a senior and the All-Conference team in both her junior and sophomore seasons. Herman led her team as a captain in 2018–19 and 2019–20.

That coach at Bottineau is Wayne Johnson, head coach of the Ladyjacks women’s basketball team. Needless to say, he thinks very highly of Herman in what she brings to the team.

“In Courtney we believe we have added a player who can have an impact on both ends of the court. We really have a need defensively for the length she will bring. Offensively she is a solid long-range shooter who has had a lot of experience playing inside with her back to the basket. We feel she will provide excellent options to enhance our inside-out play. Most importantly Courtney is a high character young lady with a strong academic background. We believe she will be a great fit for the Ladyjacks program.”

Off the court, Herman is planning to get her degree in pre-veterinary medicine.

"I know eight years of schooling is going to be a lot of hard work, but I know I can handle it and achieve my goals."

While her focus is taking each day, step by step, and preparing for collegiate life, Herman has big plans in the future and can't think of a better first stop than Dakota College at Bottineau.

"I chose DCB because of how small it was. Coming from a small-town school, going to a huge four-year school was kind of intimidating. Some of their smaller classes would be 100 students while I was used to being in a class of 14. I was scared of losing the student-teacher connection that you can get in a small school. I figured Bottineau would be a great ice breaker. I plan on starting my pre-veterinary science degree at Bottineau and then finishing it at North Dakota State University. As for sports, if I get an offer to keep playing somewhere else, I'll look into it. After finishing my degree at NDSU, I want to go to Fort Collins in Colorado (Colorado State University) to get my Doctorate in Veterinary Medicine."

As Herman alluded to, the small-town feel helped her in the decision-making process to attend Bottineau, even after receiving full admission to NDSU outside of athletics. The small-town of Lambert is where she grew up and she’s sure her connection to Lambert will always be a part of who she is as a person.

"Growing up in a small town felt more like a family than it did a community. Everyone knew everybody. I spent a lot of my childhood outside, hanging out with my classmates. We spent a lot of time down at the park just doing what kids do. I also lived next door to my best friend. If we couldn't go over to each other's house, we would just chat across the fence all day."

One of those friends is her cousin, Savage High School senior Haylie Conradsen. She will also be playing basketball at Dakota College at Bottineau alongside her.

"I can't even put it in words how excited I am to be playing ball with her. We got to play together for a few tournaments and had so much fun, so I can't wait to play with her full time," Herman said. "It's not every day that you get a cousin and a best friend all in one. I'm so happy that she has taken this next step with me to further our careers, plus I think we even get to room together."

While she's eager to begin her athletic and academic career in college, she's thankful for all four years at Lambert High School.

"There are so many memories I could share. My favorite would have to be my senior year of basketball, though," Herman said. "We became so close and felt truly like a family that could accomplish anything. I think we all shared the same passion and we worked really hard towards our goals. I love all the memories that I've shared with all the girls on my team and teammates from the past."

Herman certainly has a lot to be proud of what she has accomplished in her four years.

"Academically, I'm proud of how hard I've worked to maintain straight A's, despite my strong urges to procrastinate. Athletically, I'm proud of coming back from an injury and working hard [she tore her ACL in basketball during her sophomore season]. There was a lot of pressure put on me, said or unsaid, to get back to where I was before the injury. I think, subconsciously, I was scared of getting hurt again, but I worked hard to keep that thought at bay and worked even harder to get back to where I wanted to be."

Herman is going to miss much about the Lambert community, but she has her sights on her future, on and off the court.

"I'm going to miss all the people that have pushed me academically and athletically. I have formed some good relationships with my coaches and teachers and I'm going to miss them too. In some sports, they were both. I'm also going to miss my teammates and friends. They mean so much to me.

"As for high school," she continued, "I'll miss being at home with my family every day and seeing the people I normally do. I'll probably also miss financial stability. With all that, though, I'm happy to be going out into the real world to see what life has to offer and to be a self-governing individual."