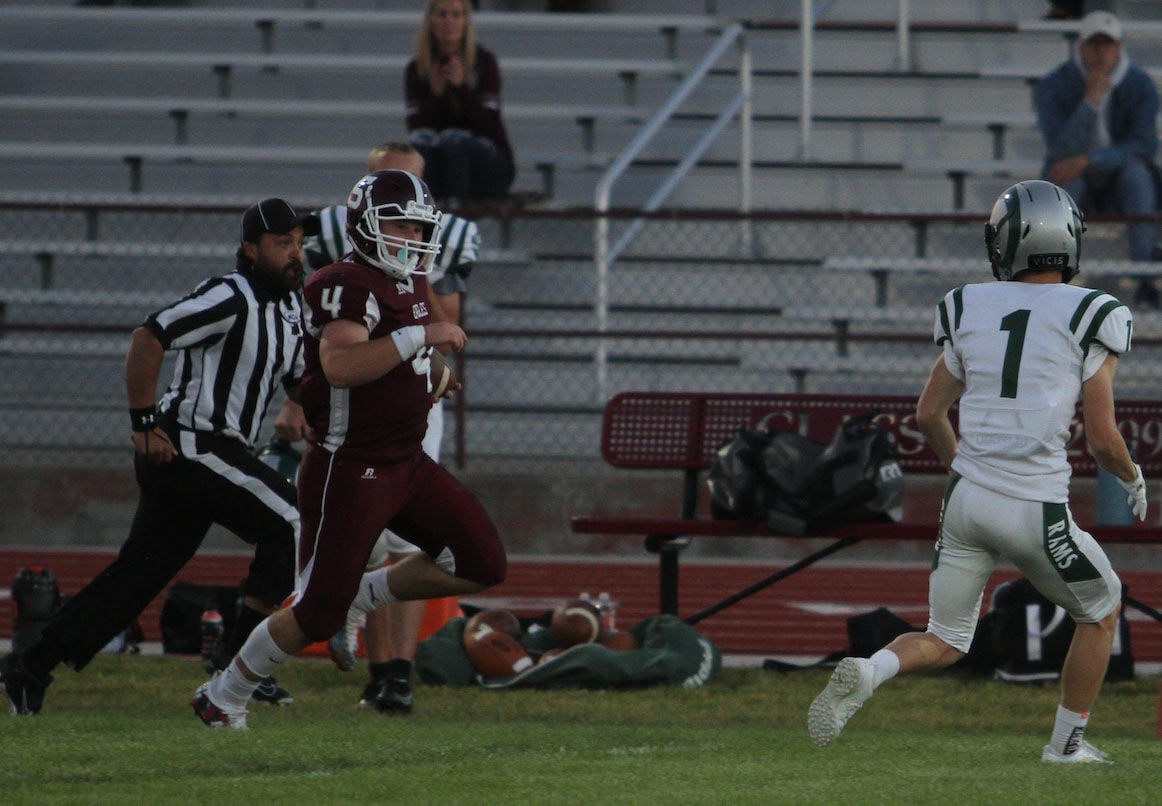 Sidney quarterback Boston Peters bolts down the sideline as a defensive back tries to cut him off during Sidney's 21-18 loss to Billings Central September 11. 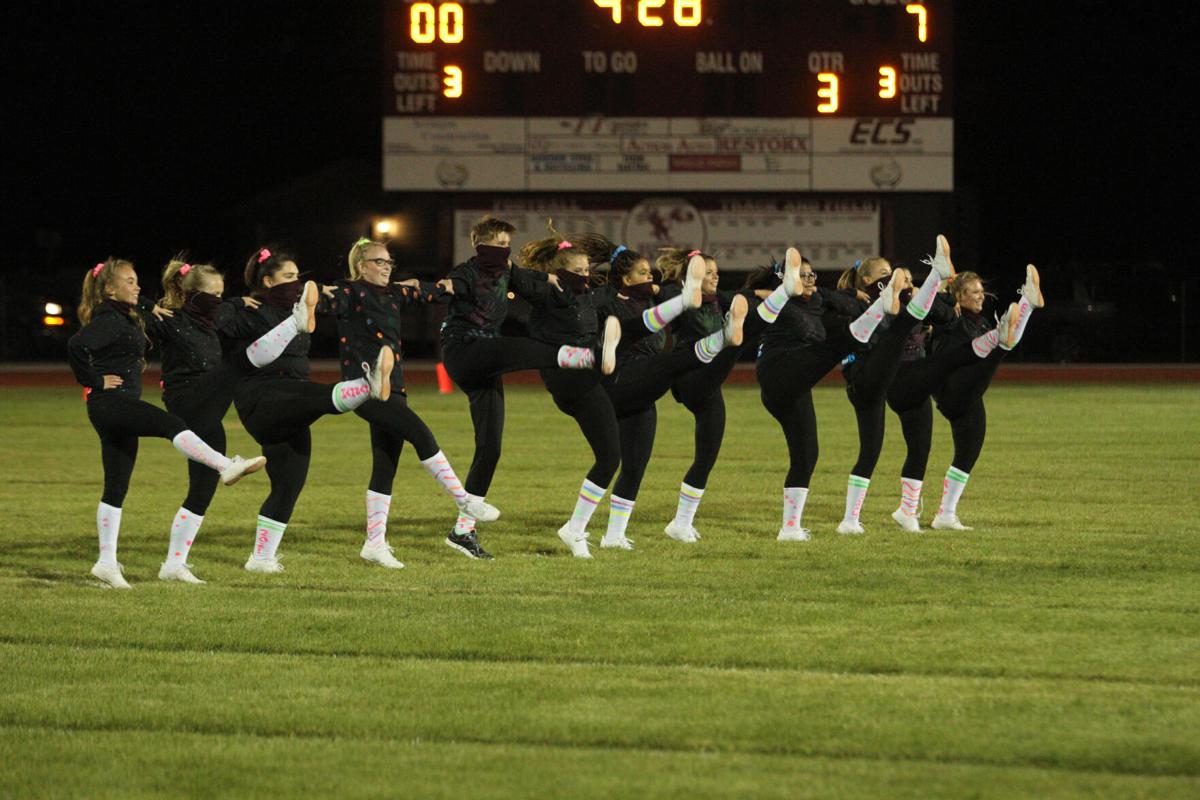 Sidney's cheerleaders do a kick line during their halftime show at the Sidney High School football team's Homecoming game against Billings Central.

Sidney quarterback Boston Peters bolts down the sideline as a defensive back tries to cut him off during Sidney's 21-18 loss to Billings Central September 11.

Sidney's cheerleaders do a kick line during their halftime show at the Sidney High School football team's Homecoming game against Billings Central.

Boston Peters probably had the biggest turnaround for the Sidney High School football team during its 21-18 Homecoming game loss to the Billings Central Rams September 11.

Sidney had back-to-back chances to score in the red zone at the end of the first half, which could have had the Eagles tied at halftime.

He threw two interceptions on those drives on throws to or near the end zone, and while there was a good feeling that Sidney was on the verge of scoring, there was also a deflated feeling after two big opportunities were missed.

A lot of Sidney’s plays in the first half, and a little bit into the second half, were running plays, and while they worked pretty well, they can only go so far.

After a while, a defense can anticipate a run and halt an offense altogether.

Sidney’s trio of backs, whom they handed the ball off to — Tate Wieferich, Aden Graves and Riley Waters — did a great job of gaining big yards and keeping drives alive with first downs. Wieferich even scored the Eagles’ first touchdown of the season on a run in the third quarter.

The Eagles still needed some more punch to get back in the game against Billings Central, though, and Peters stepped up and gave Sidney the extra threat.

Peters missed receivers in the first half and was not able to complete any throws for substantial yardage.

Then in the fourth quarter, with Sidney still trailing 14-6, the Eagles needed to start making plays to get back in the game quickly.

On 3rd and 6 at their own 24-yard line, the Eagles called a passing play, and Peters found Wieferich across the middle for a big gain and the first down.

A few plays later, another 3rd and 6 situation at the Rams’ 48-yard line, Peters found Jaxson Franklin down the sideline in front of the Sidney bench for the 48-yard touchdown.

Peters’ throw to Wieferich came out a little wobbly but was on target; Peters’ throw to Franklin, though, was a cleaner spiral and was perfectly placed, right over Franklin’s shoulder and into his awaiting hands.

Peters was not done, though, as a little bit later the Eagles started at their own 20-yard line after forcing the Rams to punt.

All it took was one play because Peters found Franklin again, this time down the sideline in front of the Rams’ bench, for an 80-yard touchdown that gave Sidney the lead.

Peters’ throw was on target, but what made that touchdown even more impressive was Franklin’s run after the catch.

Franklin caught the ball and was immediately met by a cornerback, but Franklin stiff-armed the defender right into the ground and outran everyone else for the score.

Even though the lead did not last and Sidney lost, these plays showed significant progress and promise for Peters and the whole Sidney offense going forward.

Peters showed that he can add another layer of attack for Sidney with the passing game, and Sidney’s running game is just as good.

With a balanced attack, the Eagles will be able to keep opposing teams on their toes more and be more dangerous overall.

Teams will not be able to expect runs like Billings Central did in the first half, and instead they will have to be weary of Peters throwing the ball, too.

Based on everything we saw from Sidney in its first game, people should expect a dangerous Sidney team this season.

Peters’ turnaround for the second half was one of the most important things to take away from the game.

The trio of backs used on running plays showed us what they were capable of, but Peters was still a mystery after the first half. He ended that mystery in a terrific way, while showing that Sidney’s offense this year is very talented.

Between Peters and the trio of running backs and Franklin in the receiving core, the Eagles have a dangerous cast on the offensive side.

Sidney’s defense played well too, and there is a great cast of players on defense. If anything, defending passing plays better is the biggest worry on the defensive side.

Of course, though, you cannot win with good defense and no offense, and Sidney’s offense proved it will be good enough to get some wins this season.