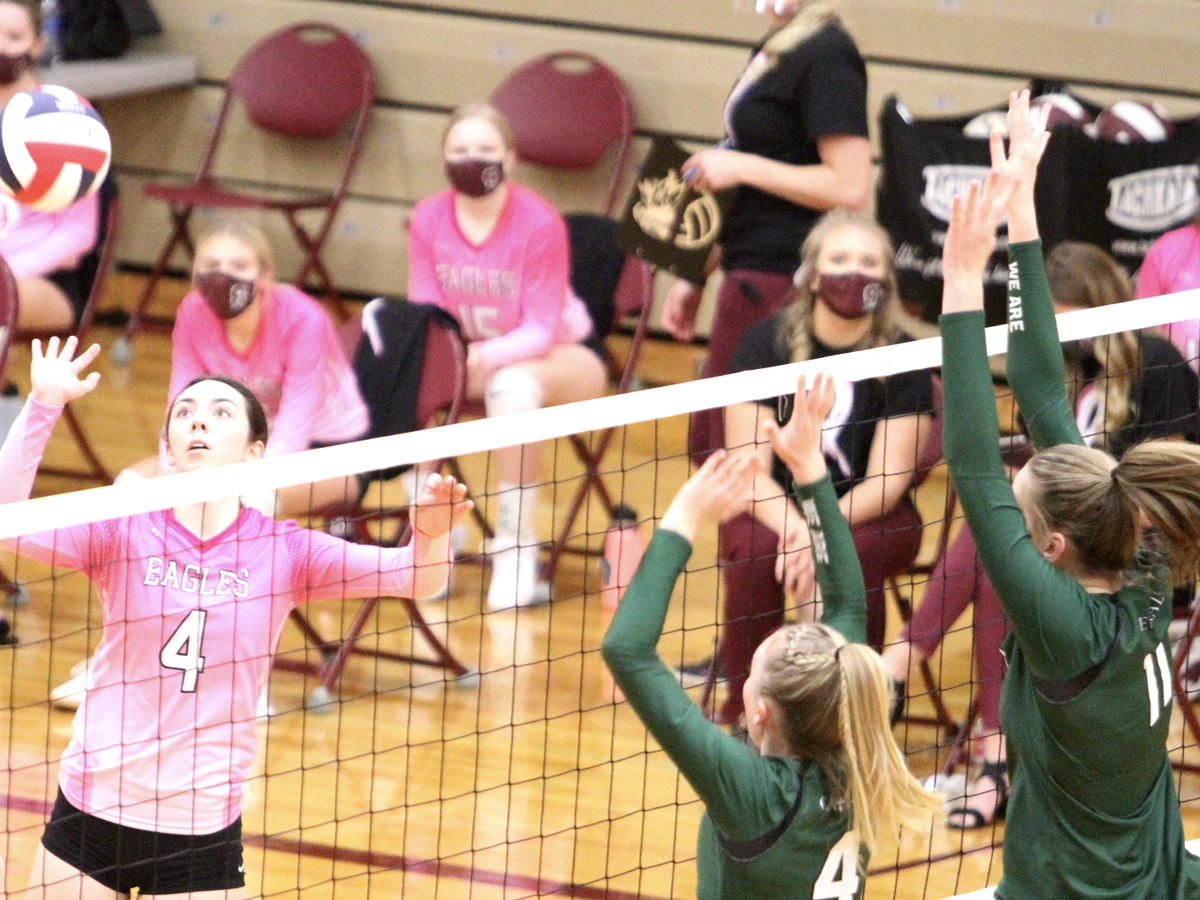 Kendyl Wacha wins up to hit the ball as two Billings Central blockers jump high to get in the way. Amber Kauffman starts her follow-through on her swing to smack the ball over the net.

Kendyl Wacha wins up to hit the ball as two Billings Central blockers jump high to get in the way.

Amber Kauffman starts her follow-through on her swing to smack the ball over the net.

They dove, they slid and they improvised more than once, but at the end of the day, the Sidney High School volleyball team played one of its better defensive games of the season against Billings Central.

Sidney lost 3 sets to 0 to Billings Central on October 17 in the Lady Eagles’ Pink Night game, and even though the Lady

Eagles lost, they had a great game defending against the Lady Rams.

As it was, Sidney played good defense anyway and was able to handle a good amount of Billings Central’s hits, which were pretty hard.

But it was now the team corralled the hits it did not handle well that was really fun to watch.

At times, the match was a thriller to watch because Sidney players had to run after a ball falling away from the main court and hit the ball at all costs to get in a manageable spot.

A lot of times, Sidney succeeded in doing so, and even if they were hurried or not-so-accurate hits, the Lady Eagles kept the point alive and did so in an entertaining fashion.

“Great defense is always so exciting to watch and we have definitely been working on getting better at hustling after every ball. So seeing them translate that work into game situations is very fun,” said Sidney Head Coach Jill Stanek.

It was evident that Billings Central did have an advantage with their offense, which did power through the sets at times, but Sidney was able to control a fair amount of hits and set up the front row for some opportunities.

The problem was that Billings Central is tall.

“Billings Central is huge. We know we are a small team, so trying to hit smart is important. And even though we did get blocked in the middle a fair amount of times, I think our pin hitters did a good job at trying to just make a smart play and hit hard when they see an opening in the block,” Stanek said.

Sidney kept the game interesting in the first set. This was the first time when the Lady Eagles showed their improvement with hustling after balls and making something out of nothing.

Even with the Lady Rams’ height, the lady Eagles got some hits and offense going later in the set and made a run to almost come back, before losing 25-20.

Billings Central jumped out to a quick and early 13-2 lead in the second set, but Sidney started to slowly chip away at the lead. The Lady Eagles did lose the set 25-10, though.

In the third, Sidney hung around with Billings Central for the first half of the set, trailing just 8-5 and looking like they could make a run and take the lead, but the Lady Rams started to exert their power over Sidney and won the final set 25-8.

Later in the second and third set, Sidney started to make a lot of mistakes that hurt its chances of coming back, but for the most part, the Lady Eagles played a good game, especially defensively.

Sidney’s improvements throughout the season showed against Billings Central, both offensively and defensively.

“From the beginning of the season until now, we are improving getting better at making aggressive out of system plays and trying to have smarter ball placement when we give free balls,” Stanek said.

Sidney will not be hosting Poplar Monday, and the next games for Sidney are Friday and Saturday against Fergus and Havre on the road.